Alternative energy stocks, as tracked by the iShares Global Clean Energy ETF (NYSEArca: ICLN), have really taken an undeserved beating over the past two weeks.

The ICLN is down more than 2% from its November highs – which, I'd point out, were also 10-year highs.

So what's going on here? You'd think with a Democrat about to move into the White House and the worsening economics of crude oil and other fossil fuels, that the sector should be off to the races.

Don't worry: Nothing has really changed, and the forecast for clean energy looks even better than it did just a year ago.

What we have here is simple profit-taking; big investors who've bet correctly on green energy this year are just skimming a little cream off the top.

So what we've got on our hands is a technical buying opportunity – one of the best of this year, I'd say.

You're probably old enough to remember when solar power was really just an expensive and inefficient undertaking for folks who wanted to "go off the grid."

It wasn't all that long ago that wind and geothermal were still pretty much theoretical. Electric cars were more like a hobby; oddities with three horsepower and 20-mile range. These were some mighty unattractive "alternatives" for most consumers.

But 20 years later, and solar and wind power are literally squeezing the life out of traditional energy sources like oil and coal. Don't look for ExxonMobil Corp. (NYSE: XOM) to go out of business next week or anything, but let's be realistic: The writing is on the wall and has been since before Exxon was booted off the Dow.

The contrast with clean energy looks really stark when you gauge the year-to-date performance of the U.S. Oil Fund LP (NYSEArca: USO) against the ICLN. USO is down more than 70% in 2020, whereas ICLN is up nearly 118%. There's just no contest there.

25 MONEY-DOUBLERS IN A YEAR – or your money back. This trading method has proven so successful over the past 31 months that over the next 12, it could hand you 25 money-doubling trades. Details here…

Of course, a lot of people feel strongly about the environmental impact of fossil fuels, but emotions aside, it's cold, hard economics and not warm, fuzzy feelings that have been hammering nails in oil's and coal's coffins.

Coal use fell 3% worldwide in 2019, its biggest yearly decline from a 2013 peak. Yale University reports construction of new coal-fired energy generation plants fell by 84% between 2015 and 2018, and in the United States alone, 39,000 megawatts of coal-generated power have come offline since Trump's election in 2016.

On the other hand, solar power has long since achieved and blown past "grid parity" – where the cost of power generation is at least as cheap or cheaper than traditional fuels – in many countries, it's simply cheaper to use than many fossil fuels.

In the United States, renewable energy use increased 100% between 2000 and 2018, to the point that, by 2050, it's thought we'll get more than 50% of our power from renewable sources, mainly solar. And that's a conservative estimate that assumes things will keep going at their present pace; history tells us that pace is likely to accelerate.

Does that sound "alternative" to you? I didn't think so – more like the mainstream.

NO SIGNUP REQUIRED! Get Shah Gilani's list of the best (and the worst) stocks in America, absolutely free; he's showing what to buy and what to unload. Watch here…

So, whether you grow organic veggies off the grid in a carbon-neutral, sustainably-sourced wood cabin, or you're T. Boone Pickens reborn, you've got to be in solar and renewable energy to maximize your profits.

I think the best way to play this right now, the stock to own, is SunPower Corp. (NASDAQ: SPWR). 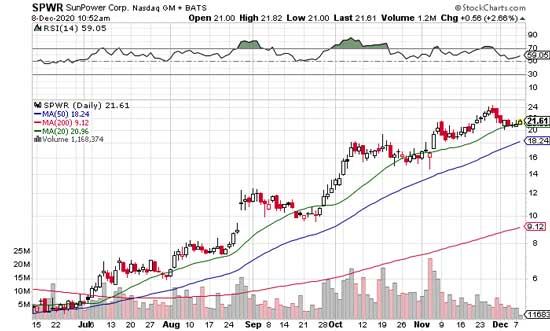 Now, I just issued a research recommendation for an option on this company for my paid subscribers; we've got our sights set on big gains.

But I can share the stock recommendation with everyone.

The fundamental, business case for owning a company that manufactures silicon photovoltaic cells and solar panels in the middle of a decades-long solar energy bull run is crystal clear, but this stock is also on the precipice of a big, technical jump, running above three – count 'em, one, two, three – key simple moving averages, the 200-day, the 50-day, and 20-day.

The chart above represents a golden buying opportunity and the perfect moment to strike.

If you couldn't tell, I'm bullish on renewable energy in the short and long term; there are a lot of great companies in this space, and the ICLN ETF is a great way to capture the best. But if you only own one renewables stock right now, make sure it's SunPower.

SunPower is potentially a great trade, too, as my subscribers might tell you.

The truth is, I have just three criteria that stocks need to meet to become a trade recommendation.

Eighty-eight percent of the time, the stocks that have met these criteria have gone up in value. You can go here to check it out and uncover the three rules of a winning trade…