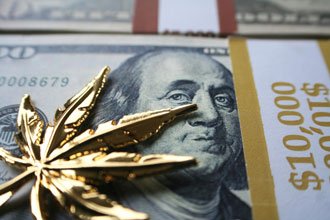 Marijuana stocks are full of potential in 2021, with legalization sweeping the country...

In 2021, we know at least two more states will allow the sale of legal marijuana - Mississippi (medical) and South Dakota (medical and recreational).

And in three states where it was already medically legal - New Jersey, Montana, and Arizona - anyone over the age of 21 will now be able to purchase cannabis recreationally in 2021.

By 2022, we could very well see even more laws to legalize medicinal or recreational weed as 11 of the 15 states remaining to legalize it are expected to vote on it then.

But between now and 2022, there is likely going to be explosive growth in the cannabis industry that early investors willing to take the risk can still capitalize on.

So if you haven't invested yet, it's not too late to buy my best marijuana stocks for 2021...

One of the most exciting marijuana stocks to buy now is a company that specializes in building and managing industrial facilities that medical cannabis companies use to grow the herb.

Founded in 2016, this company became the first publicly traded firm on the NYSE to provide real estate capital to the medical-use cannabis industry.

This is important because it gives the company access to institutional investors not available to the private companies similar to it out there.

The company also offers financing to medical marijuana growers for industrial equipment they need to grow their products since they can't legally lend from traditional banks.

To date, this firm leases 41 facilities to 23 different growers across 16 states.

The best part is this company is structured as a real estate investment trust (REIT), meaning it's required by law to pay out at least 90% of its income in the form of dividends to shareholders.

In fact, the company pays a 3% dividend now, making it one of the highest-yielding dividend stocks in the marijuana space today.

This stock is perfect for investors who are looking to generate a reliable income combined with the potential for capital appreciation.

It's also a great stock for investors who don't want to take the risk of investing in cannabis companies that might take a long time to achieve profitability.

This business is profitable - very profitable. In fact, the business has made money in each of the last 13 quarters - growing those profits steadily along the way.

The company's market cap currently sits at $3.5 billion. But as the stock grows in value, the dividend shrinks relative to your investment (before management can increase it again, at least - which it has every year since the stock went public in 2017).

So, if you want to lock in at least a 3% yield now, pick up shares of IIPR today.

Investors should continue to benefit from rising profits, rising dividends, and a rising share price for years to come before Wall Street catches on.

The Best Growth Marijuana Stock to Buy in 2021

And after conducting more research myself, I'd have to agree.

In fact, if you invested in Jushi when Don first recommended the stock to members of the National Institute for Cannabis Investors (NICI) in July, you'd already be sitting on a 181.5% gain.

But don't worry; this stock still has plenty legs to run higher with only a $4.28 price per share and a $479.6 million market cap today.

That's why I'm calling it my best cannabis stock for growth in 2021.

One of the 23 different growers the IIPR lends to, Jushi not only grows its own cannabis - the company is also able to generate higher profit margins by selling the cannabis it grows at its own retail locations.

You see, many cannabis cultivators only grow their product and sell it to separate retailers in bulk.

If it costs them $50 to grow an ounce of cannabis, they would sell it to a separate retailer in bulk for $100 per ounce. That's a 100% profit margin.

The retailer would then go on to sell that same ounce to customers for $200.

The reason Jushi is primed for high growth is because it only has eight dispensaries open right now. But with 15 more planned, you can feel confident you're still getting in on the ground floor.

Jushi's founders have deep pockets. They invested $45 million of their own money to get it started, and now they're expanding rapidly.

Along with 15 new dispensaries on the way in premium markets like Northern Virginia and Santa Barbara, Calif. (two of the wealthiest populations in the United States), the company recently invested in a nine-person management team with 330 new staff members.

According to Don, who has gotten to know the founders of the company very well over the past 18 months, "In the two quarters following this heavy investment, sales went from $6 million to $9 million and then to $15 million."

He went on to say, "Nine months out now, the company is on pace to deliver $24 million in its fourth quarter of operations. That's nearly a $100 million annual revenue pace. And this is just its first year."

For a company that's only worth a total $479.6 million, those are some very exciting revenue numbers for year one that lead me to believe the stock is undervalued.

The Top Marijuana Stock to Buy 2021 Is a Steal

With a market cap of $41 billion, Constellation Brands Inc. (NYSE: STZ) is a sleeping giant in the cannabis industry.

Originally known for making and distributing Corona and Modelo beer, Svedka vodka, and Black Box wine (just to name a few), Constellation made a huge splash into the cannabis industry with a $4 billion investment in Canopy Growth Corp. (NYSE: CGC) in 2017.

Constellation became the first Fortune 500 company to take the leap into legal cannabis. And because it probably won't be the last, investors can still profit from the tailwind of future Fortune 500 companies to follow...

In fact, STZ is in such a favorable position to capture so much of the recreational cannabis market by infusing cannabis into beverages, analysts at NICI are calling it a "stock to retire on."

You see, Constellation already knows how to operate in a regulated industry, managing the transportation and sale of products that can only be sold to people of age.

Founded in 1945, STZ has decades of experience dealing with the government and suppliers to legally transport and sell as much of its products as possible.

Now is the time to buy Constellation because its immense growth potential with Canopy from future sales of cannabis-infused beverages has not yet been realized in the stock.

When cannabis finally becomes federally legal, the head start STZ and CGC have on the rest of the competition simply won't be fair. These companies are going to dominate.

And with the U.S. House of Representatives passing the Marijuana Opportunity Reinvestment and Expungement (MORE) Act last Friday (Dec. 4), federal legalization might not be too far off...

This certainly puts Canopy in the category of one of the fastest-growing cannabis stocks in the world.

But I think investors should be buying Constellation because there's a larger margin of safety and a longer history of profits with STZ compared to CGC.

You see, Canopy has yet to turn an annual profit, while Constellation has made money in 17 of the last 20 years.

But Constellation is a less risky value play because it's growing every year based on its current beverage lineup alone.

And STZ pays a healthy 1.4% dividend investors can rely on.

That's what makes Constellation Brands the best marijuana value stock on the market today. Investors should buy and hold STZ throughout 2021 and beyond.

Well, National Institute for Cannabis Investors just released its three best for next year as well.

Get the full report for free here.