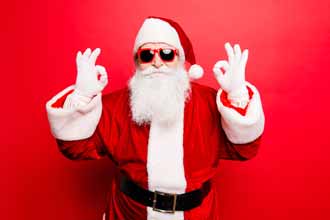 While the vaccine rally is still playing out, many traders are already looking ahead to the Santa Claus Rally.

The term "Santa Claus Rally" was first coined by Yale Hirsch of Stock Traders Almanac. He pointed out the calendar anomaly back in 1972.

In the last five trading days of December, and the first two trading days of January, prices historically have been higher 76% of the time. According to the almanac, the average gain has been about 1.3%, which is much higher than average for a seven-day stretch.

While those new to the markets in 2020 might think a seven-day move of a puny 1.3% is not even worth discussing, historically, it is a fairly large gain over just seven days.

For comparative purposes, the average monthly return for the past decade, one of the strongest in history, has been 1.15%, which is less than the seven-day Santa period.

Why Does the Santa Claus Rally Happen?

There are many theories, but the best-fit idea is that tax-loss harvesting has ended. Investors part ways with losers before the new year to manage their tax bill.

Tax-related selling has stopped, and traders who did not fly off to Aspen or the Caribbean for the holidays are buying to get a head start on the January effect.

The best way to find the type of momentum reversal stocks that will benefit from the Santa Claus Rally is to look for stocks that are down in 2020 but have started to reverse as tax-loss selling is ending.

5G Stock to Buy: This company is the best way to cash in on 5G, and it's flying under the radar – for now. Get in before the share price surge – access this pick for free here.

The Santa Rally is a momentum play, so we want stocks starting to recover and are beginning to outperform the S&P 500.

Since chasing Santa is a trading strategy, they need to be large liquid stocks that allow us to move in and out quickly.

Here are a few of the best stocks to buy ahead of the event.

Stocks to Buy for the Santa Claus Rally

Kinder Morgan Inc. (NYSE: KMI) is a leading candidate for the Santa Claus Rally this year. Shares of the energy infrastructure company are down a little over 30% in 2020 but have started to recover.

In the last month, Kinder Morgan shares have leaped higher by more than 20%

Technically the stock is poised to launch into the Santa Claus time period. The 20-day moving average has crossed the 50-day and has a positive slope.

The 50-day is starting to turn higher as well, so when we get to the starting point of the Santa Claus rally, Kinder Morgan could be in the early stage of a new bull market.

Tyson Foods Inc. (NYSE: TSN) has also seen its stock decline by almost 25% in 2020. There are signs that the selling is over, and the stock is poised to move dramatically higher as we move into 2021.

Several fundamental drivers could help lift Tyson Foods as we move into the New Year. Just 10% of Tysons products have been sold internationally. They have been focusing on acquisitions to get their chicken and meat products into the global marketplace, which could be a key source of growth.

Their plant-based division, Raised and Rooted, is seeing strong demand for its alternative protein products. Their meat substitutes are now in 10,000 U.S. stores and Europe.

Jack in the Box Inc. (NASDAQ: JACK) is also testing Tysons Unchicken Sandwich products in stores until the end of the year.

The stock looks ready to launch on the charts. The 20-day moving average has crossed the 50 and the 200, and the 50-day is poised to cross the 200-day on the next rally.

The stock price crossed above the 200-day moving average in late November, indicating a new bull market could be getting underway in shares of Tyson Foods.

We do not usually talk about the bluest blue-chip of them all as a trading stock. This is 2020, however, so everything is a little different, and AT&T Inc. (NYSE: T) fits the definition of a Santa Claus stock poised to move higher.

The stock is down almost 25% for the year, but as tax selling has dried up, the stock has moved higher, easily outperforming the index over the last month and week.

Technically the stock has a great setup. The 20-day moving average has a strong positive slope and has crossed the 50-day. The slope of the 50-day is also starting to move higher.

The stock could see buying from investors who want dividend stocks for their 2021 portfolio. Or maybe they'll be looking for a conservative way to get in on next year's 5G boom.

Santa Claus is heading to Wall Street, and these stocks may help you take advantage of his arrival.

All three are trading at a discount… are under-the-radar companies most people haven't even heard of… and have massive tailwinds with the potential to make their prices skyrocket.