I'm not sure I could have survived this year without e-commerce, and I have a feeling many of you are thinking the same thing. 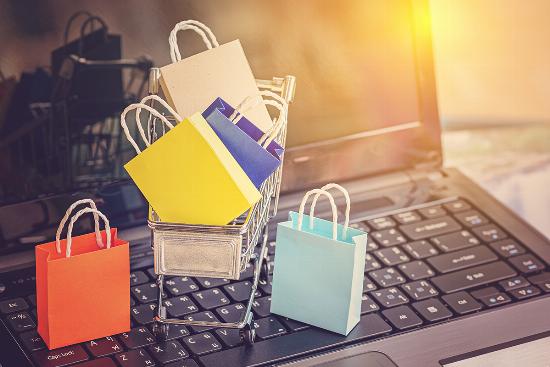 In fact, e-commerce is growing faster than ever before, jumping to 16.1% of total retail sales in Q2 2020 from 10.8% last year in the United States. That equates to billions of dollars spent online from groceries to electronics and even cars. That's why we have seen stocks like Shopify Inc. (NYSE: SHOP), Amazon.com Inc. (NASDAQ: AMZN), and Carvana Co. (NYSE: CVNA) skyrocket over 100% this year with everyone at home.

The best part is this trend isn't going away anytime soon.

According to a survey done by the United Nations Conference on Trade and Development, the COVID-19 pandemic has forever changed online shopping behaviors. Following the pandemic, more than half of the survey's respondents will continue to shop online more frequently.

The pandemic has accelerated the shift toward a more digital world, and we have seen that everywhere. We talked about it with MercadoLibre Inc. (NASDAQ: MELI) in Latin America and with Sea Ltd. (NYSE: SE) is Southeast Asia.

Now I want to talk to you about an entirely different market with a recent IPO that it is taking e-commerce head on...

We have all heard of Amazon and Alibaba Group Holdings Inc. (NYSE: BABA), but chances are you have not yet heard about Ozon Holdings Plc. (NASDAQ: OZON). It's one of the top e-commerce companies in Russia, and it has a bright future ahead of it.

Interestingly enough, just like Amazon, it was founded as an online bookstore in 1998. It quickly expanded to sell clothing, music, movies, electronics, and fresh food and now offers more than 9 million products across 24 product categories.

Despite existing for decades, e-commerce in Russia is still a nascent market compared to many other parts of the world. The e-commerce market for 2020 in Russia is roughly $24 billion in sales. The U.S. manages roughly $600 billion, for comparison. That's quite a big gap, even with the population difference.

But that is changing quickly as the pandemic has helped fuel a paradigm shift across the globe.

Russia isn't standing still as e-commerce sales grew 51% year over year during the first six months of 2020, and we are not about see growth slow as Russia embraces the benefits of e-commerce.

What this means is e-commerce in Russia is a huge growth opportunity as it catches up to the rest of the world.

And Ozon is ready to claim the spoils...

How Ozon Is Claiming Russia

Ozon is one of Russia's leading multi-category e-commerce platforms. Its gross merchandise value (GMV) expanded 142% in the first nine months of the year up helped by its active customers ordering more than ever before. This growth is helped by the low penetration rate of e-commerce in Russia.

Ozon is also investing in logistics having announced plans to spend more than $300 million in the next two to three years. This will enable the company to add over 2.5 million square feet of distribution centers across the country, an over 100% increase.

While there is competition with other e-commerce companies like Wildberries, which has 34 million customers, and Alibaba, which has teamed up with Mail.ru in order to create the joint venture AliExpress, there is a "rising tide lifts all boats" situation happening.

The market is still highly fragmented as the top three players control roughly a quarter of the market according to Data Insight. While these numbers vary depending on the source, Data Insights pegs Wildberries at 13%, AliExpress Russia at 8%, and Ozon at 6%. For comparison, some estimates put Amazon at over 50% of the U.S. market on its own. Given the new frontier of this business for Russia, competition is not a huge concern at this point.

Russia's main problems lie in the long distances and weak infrastructure. The country counts 11 different time zones and stretches over 5,600 miles, double the United States. Ozon is well aware of these challenges and now has over 2 million square feet of fulfillment infrastructure across Russia with one of the largest fulfillment centers in the business, over 40 sorting hubs, 7,500 parcel lockers, and 2,700 couriers.

This investment is definitely a risk with the Russian Ruble being under pressure and investing in foreign markets, but at a valuation under $10 billion, this could be a huge stock.

The benefits to owning Ozon could outweigh the risks, and I like the fact that it is going into such a big market with Sistema owning 31% of the company and not looking to sell.

Ozon had 11.4 million active buyers in Q3 2020, and more than 51 million people have downloaded the company's shopping app, which had 41 million monthly active users in the same quarter.

With its previously mentioned logistics centers, Ozon is able to cover 40% of the Russian population with next-day delivery, and that could greatly improve given the committed investment in logistics.

Much like Amazon, it is also making the switch toward a marketplace and now counts 18.1 million active merchants up from 1.3 million in Q1 2019.

All of this has helped it to grow its revenue 70% to roughly $1 billion in the first nine months of 2020 compared to the previous year, and operating expenses as a percentage of sales was down from a year early from 51% to 48%.

Ozon also had $66 million in cash pre-IPO and raised almost $1 billion during the IPO to fund its expansion.

Overall, Ozon is in a strong position to continue to expand in the Russian e-commerce market and should continue to be a major player.

Get the Best Stocks in America - No Sign-Up Required

So he's showing you which stocks you should consider buying NOW and which to sell ASAP.

With his help, you'll know how to be in the best position possible to potentially make a fortune next year.