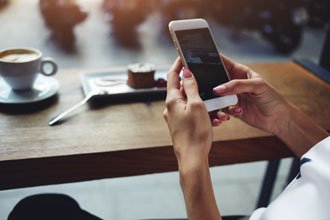 As 5G expands throughout the world of mobile technology, Qualcomm Inc. (NASDAQ: QCOM) will continue to be a major player in the global rollout.

Qualcomm is a global leader in developing, supplying, and licensing the technology to connect people to 5G through their mobile devices.

The market is so massive. There are more mobile devices than toothbrushes in the world, after all...

And as 5G continues to expand, investors should expect QCOM stock to rise with it for years to come.

The exploding demand for this technology includes the new 5G iPhone, makes this a tech stock worth looking at.

Qualcomm is the driving force behind 5G, and its launch, development, and expansion.

Here is our complete analysis of the company, including our Qualcomm stock prediction.

What Does Qualcomm Sell?

Many new phones are expected to require Qualcomm's 5G chipset. Although Intel attempted to enter this market, it was unable to do so. Additionally, the U.S. Federal Trade Commission attempted to have Qualcomm ruled a monopoly due to its importance to the industry. Thankfully, Qualcomm won this battle and persuaded an appeals court to overturn the ruling.

Qualcomm's Snapdragon 865 chip is reported to beat out Apple's A14 Bionic SoC chip with the low score on the A14 possibly attributable to unstable software. This determination was made by AnTuTu, the Chinese software benchmarking tool. The Snapdragon 865 Plus will be used in a variety of internationally developed devices including the upgraded OnePlus 8 smartphones and the Realm X3 Pro.

Qualcomm's growth is fueled in part by the company's recent successes, which include:

Qualcomm and Apple Are Partners Again

Apple and Qualcomm settled a landmark royalty dispute in 2019, and since, they seem to have patched things up.

The demand for the new 5G iPhones is strong, and the rollout of the 5G network continues even with the current COVID-19 pandemic.

Apple will likely use Qualcomm's technology in its new 5G devices, and Qualcomm and Apple signed both a chip supply agreement and a multi-year patent license.

Qualcomm overcame patent licensing issues that have plagued the company since 2014.

The U.S. 9th Circuit Court of Appeals ruled in Qualcomm's favor in 2019. The court ruled that Qualcomm's patent licensing practices do not violate anti-monopoly laws, and threw out a lower court's antitrust finding brought against the company in 2017.

Qualcomm's ability to continue its patent licensing practices represents a strategic win for the company.

These patent licenses fund about $5 billion each year in research, which puts Qualcomm on the cutting edge of mobile technology.

As part of Qualcomm's move to settle these patent issues, Qualcomm now offers worldwide licenses for its cellular standard-essential patents at a lower rate.

Qualcomm recently announced a collaboration with Microsoft to enhance the performance and app compatibility experiences of Windows 10 devices.

Microsoft will expand its App Assure program to deliver superior user experiences on devices including those in the Snapdragon-powered PC ecosystem.

Qualcomm also signed licensing deals with other smartphone brands and device manufacturers, such as Samsung, LG, Vivo, and Huawei, and the royalty rate is up 3.25% to the $400 cap for cellular standard-essential patents.

In 2019, Qualcomm generated $4.6 billion in revenue from licensing, and 2020 Q3 revenue was recently reported as $4.9 billion. The forecast for Qualcomm's annual revenue from patent licensing in FY 2021 sits at about $6 billion.

Is Now a Good Time to Invest in Qualcomm?

Qualcomm has seen many instances of recent successes, including positive lawsuit outcomes, critical involvement in rolling out 5G, expansion of its position as a worldwide processor supplier, and deepening relationships with Microsoft and Apple. With all this in mind, it seems that Qualcomm stock predictions look like a positive investment opportunity.

In July, as the 5G rollout continues, Qualcomm entered into a long-term licensing agreement with the Chinese telecom giant Huawei.

These companies, which include Qualcomm, represent a significant stake of the American technology industry, and it seems that the U.S. government isn't ready to cut off China from U.S. technology. Qualcomm's long-term agreement with one of the world's biggest 5G companies currently appears safe.