You've seen the news on the "SolarWinds Hack," a Russian-engineered cyberattack against U.S. government agencies, state operations, big companies, and even the "think tanks" we often write about.

What you might not understand is just how big a deal this digital assault could prove to be.

This campaign of espionage was so widespread and so penetrating that it may take years to fully understand the damage it inflicted. The Cybersecurity and Infrastructure Security Agency (CISA) calls it "a grave risk to national security," and one cybersecurity expert said it could easily end up being "the biggest ever."

Nor is it over: The incoming Biden administration says the United States will "respond in kind" to the Russian moves - as it should.

But here's the point we really want to drive home today. And it's a point we've talked about with you folks over and over again: There is a "New Cold War" underway right now, and cyberspace is yet another battlefield we're fighting on. The Trump administration just revealed defensive actions it's taken against hackers working for the Iranian government, and U.S. prosecutors recently indicted six Russian military officers in connection with three huge previous cyberattacks.

The bottom line: In the unseen digital realms of cyberspace - and out in the real world - the New Cold War is getting hotter.

In November, North Korea - at an unprecedented predawn military parade clearly designed to send a message to Washington - unveiled a "Monster Missile" that will be the world's biggest mobile-launched intercontinental ballistic missile (ICBM) if it becomes operational.

EXPLOSIVE: Regular investors have had the chance to learn how to leverage small stocks to potentially grow 548% richer. Find out how...

And these are just the conflicts we know about. The next president will have to deal with all of them.

That means certain types of high-tech and military innovation will have to continue.

As an investor, you can't afford to ignore a $2 trillion global business - one that accounts for 2.2% of the worldwide gross domestic product (GDP) and equals $249 for every man, woman, and child on the planet.

Understanding where defense dollars will be spent will help you zero in on the winners in the "New Arms Race" - while also avoiding the sectors and companies that will be left behind.

Today we're going to do just that...

This Conflict Has Been a Long Time Brewing

It's been eight years since I first started warning my readers about a "New Cold War" - and the new arms race it would trigger.

You see, I'm a living, breathing product of the "first" Cold War - the one that lasted from the end of World War II until the collapse of the Berlin Wall in 1990; a stretch of 45 years. 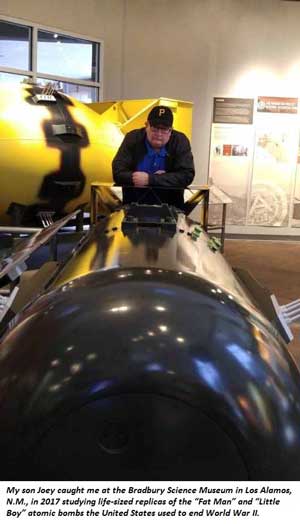 He told me stories of the Cuban Missile Crisis, of plans to build a reactor-powered "atomic bomber," and Admiral Hyman Rickover's "Nuclear Navy" - with super-quiet submarines that could "hit" any enemy city on the planet with kiloton-tipped ballistic missiles.

In "Cold War No. 1," there was still an "Eastern bloc," a divided Germany, and a Soviet Union that U.S. President Ronald Reagan referred to as "the Evil Empire."

I liked Reagan: Indeed, as a reporter, I covered his speech when he spoke to the kids at Fallston High School here in the town where I grew up (and still live).

Then - as now - there were secrets.

Some of them eventually "came into the light" - like UFO reports that turned out to be top-secret jets like the Lockheed "Skunk Works" SR-71 Blackbird spy plane or the F-117A stealth fighter. Or, as I told my paid-up Private Briefing subscribers in "The Man Who Saved the World," how horribly close the United States and Russia actually came to nuclear war during the Cuban Missile Crisis.

Others remain secret - like the "real" reason the Pentagon spent $800 million ($4 billion in today's dollars) in collaboration with a Howard Hughes company on "Project Azorian," a failed attempt to raise an obsolete Russian ballistic missile submarine - a "boomer" - from 16,000 feet below the Pacific Ocean surface.

BUY THIS, NOT THAT: Shah Gilani's list of the best (and worst) stocks for 2021 - no credit card or signup required. Get it here...

I read about the Cold War in the daily headlines. I listened to its propaganda on the international shortwave broadcasts I tuned into each day. My dad alluded to it - without divulging any work secrets - when he was home from work, or as we enjoyed many of the hobbies we shared.

You couldn't escape the Cold War's shadow. It was never far from your thoughts.

So I know what such a "war" looks and feels like. I understand the risks, then as now.

Now we've entered a "New Cold War." This one pits us against China, Russia, North Korea, Iran, and "stateless" threats that are tougher to see. It will force us to think - and defend ourselves - in new ways.

Part of that "defense" is financial. Personally financial. More than ever, we need to take control of our personal financial destinies.

And that includes finding the new opportunities that accompany the "New Cold War."

Big Business - in the Shadows

America is the biggest player in the global defense game, accounting for about 38% of worldwide outlays.

If the U.S. defense budget were treated as a separate economy, it would rank among the top 25 countries as measured by gross domestic product (GDP). And stepped-up spending by countries like China, Saudi Arabia, and India - coupled with expensive new innovations like hypersonics, missile defense systems, and AI-directed drones, will force the United States to keep its foot on the gas.

According to ResearchAndMarkets.com, worldwide defense spending came in at about $1.8 trillion this year. It will rise nearly 30% to hit $2.3 trillion by 2028.

And those numbers may actually understate what's really being spent.

According to the latest figures from the Stockholm Peace Research Institute (SIPRI) - which issues these figures every year - global defense spending hit $1.917 trillion in 2019, a 3.6% jump from 2018 and the biggest year-over-year jump since 2010.

We're not talking about scorching yearly growth rates. But we are talking about massive amounts of cash. That spending is likely to become more focused in the years to come, meaning investors who identify the big trends (and big winners) ahead of time will become big wealth winners themselves.

There are certain categories of weapons systems or other defense innovations that Washington simply won't be able to abandon - no matter who's in the White House.

As promised, I'm going to detail a few of them here for you today. They include:

Drones: As I've told my subscribers, airplanes, helicopters, surface ships, and submarines piloted by artificial intelligence, but capable of operating on their own or as part of a larger group, are quickly becoming a military reality. Kratos Defense & Security Solutions Inc. (NASDAQ: KTOS) - which we've nicknamed "the little drones company that could" - has created pilotless jets that could serve as "loyal wingmen" to human-piloted combat jets. The Boeing Co. (NYSE: BA) has created AI-controlled aerial tankers - and versatile, crewless drone submarines. And Private Briefing pick Leidos Holdings Inc. (NYSE: LDOS) has created a crewless catamaran called the "Sea Hunter" (see photo) that's designed to hunt enemy subs in hot spots like the South China Sea. Put drones in the "definite" category in terms of global spending - and promising wealth plays.

Hypersonics: I've been telling you about "Wedge Weapons" since 2012; we shared a seminal, ahead-of-the-curve report back in 2016. We said hypersonic weapons were coming - and now they're here. These are true "destabilizing" weapons. Traditional defenses - like today's missile interceptors - can't easily track and blast these nuclear-tipped, ground- or air-launched missile/rockets that can travel at multi-Mach speeds and display the defense-evading, on-the-deck maneuverability of a nimble fighter jet. America had a big lead in this area, but then scaled back spending and allowed Russia and China to narrow the gap. Now Washington is playing its usual game - "catch up." The Pentagon's fiscal 2021 budget seeks $3.2 billion for hypersonic research - up from $2.6 billion this year. New propulsion systems, new materials, new guidance systems, and new defenses will be needed. The key point is that America can't afford to abdicate this slice of the weapons market.

Air Defense/Missile Defense: If the threat of the hypersonic "Wedge Weapons" wasn't enough, we also have to worry about countries like North Korea or Iran building or obtaining nukes. Plus, China has developed a class of hypersonic weapons global experts have nicknamed "The Carrier Killers" because they target ships. Then there's the threat posed by cheap, armed drones, which are tough to pick up on conventional radar systems. This is driving the development of missile-interceptor systems, Phalanx-type close-in defense weapons, railguns, and "directed-energy weapons" like lasers and "microwave cannons." We've detailed all of those in reports for you over at Private Briefing.

There are other areas of focus, too, that I talk about with my Private Briefing readers regularly. You can learn all about how to get those updates right here.

With trillions of dollars flooding in, defense spending is one of the bigger "capital waves" washing over markets in 2020 and 2021. But there could be other huge potential inflows, as well.

My colleague, Shah Gilani - a guy I've interviewed many times before - is predicting $353 billion in new wealth that could hit these five specific companies in just 18 months or less. It's one of the bolder calls Shah has made - and he's made lots of bold calls. You can see details here...