"The FAANGs" have been a convenient shorthand for the mega-cap Nasdaq tech firms that have led the markets higher since the middle of the last decade. In 2020, at a time when markets desperately needed a leader, they were there.

But from a technical perspective, the FAANGs are starting to show a little long-term fatigue in the charts.

And then there's the elephant in the room: Everyone points to the FAANGs as a reason to be in the market - and they are great stocks - but if you wanted to buy 100 shares of each of these stocks, you'd have to fork over nearly $687,000 (the price of a nice house in many parts of the country).

Fortunately, the next group of market leaders is out there right now, going more or less under everyone's radar.

I'm not sure how much longer they'll stay there, though - performance like this tends to get noticed. Tech stocks grew by around 45% in 2020, but the ones we'll talk about in a second shot up 147%.

This Is the Next Tech Sector

I'm talking about clean, or so-called "alternative" energy. I think this will be the decade when energy stocks become tech stocks.

A lot of us will remember the first bull run for these stocks back in the mid-2000s. It was part of an overall bullish period - including for crude oil, which, if you recall was well north of $100 a barrel in those days.

CLOCK'S TICKING: Investors are feeling the pain of Bitcoin "FOMO" right now as Bitcoin soars past $40,000. There's still time to act - but as the chart in this forecast shows, in a very short period of time, it could be too late...

There were a lot of reasons for the green bubble to burst, but, fundamentally, at the end of the day, even in the mid-2000s, the technology these companies needed to grow sustainably just wasn't there; the firms touted the high tech, and excitable investors went for it, but ultimately corporate PR departments were writing checks that production just couldn't cash, if you take my meaning.

A lot of outfits folded for good, but the best clean energy companies stuck with it, kept their heads down, and innovated, taking every opportunity. Now, in 2021, their business case is open and shut. The technology has caught up with the (merited) hype.

Clean energy is here, it is thriving, and it's a maturing sector, so I'm investing with confidence here. It's essentially unstoppable. "Alternative" energy is quickly becoming mainstream, as new technologies are mastered and, importantly, the costs for generating and moving this energy drop below - sometimes far below - the costs of coal and other fossil fuels. "Grid parity" is close at hand, and it's already been achieved in many places.

One of the biggest "but wait" issues of the past few years, the chief worry, was that investment and incentives in and for clean energy would fade; the Trump administration, which was none too friendly toward renewables, would supposedly see to that.

Instead, we had four years of industry-wide innovation and investment that added billions to bottom lines across the sector.

That's set to change, of course, come this Jan. 20, as Democrats, with narrow majorities in both chambers of Congress, take the reins of government. The Biden/Harris ticket campaigned on a massive, stimulative boost to renewables, both as a means of job creation and to combat climate change. It's a politically popular idea across the left, right, and center of the party base.

For that matter, it's popular among Republican voters, too, more than 51% of whom want bigger, better investments in renewables.

In other words, there's a powerful, basically bipartisan mandate for clean energy right now. I think we're into a phase that's not too unlike the years after the dot-com crash, years of real growth where the strongest, best ideas in the sector flourished. Pets.com didn't make it, but Amazon certainly hung in there.

The sector has undoubtedly moved into the acceptance phase of its growth cycle, and I think, over the years and decades ahead, it'll prove to be what the FAANGs were in the last decade - one of the most powerful waves investors can ride - and this is the moment.

Here's what I suggest we do about it...

The iShares Global Clean Energy ETF (NASDAQ: ICLN) is one of the best ways to cash in on what's happening in renewables right now.

ICLN management picks the winning stocks, so you don't have to. 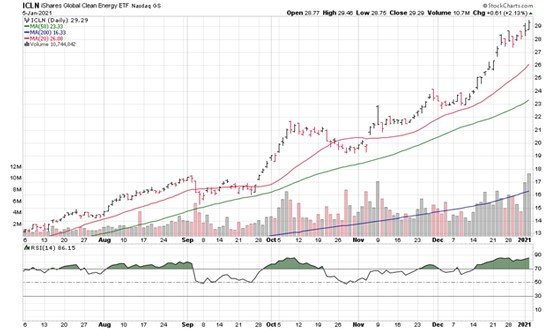 The ICLN invests in more than three dozen companies from around the world. Well-known companies like Enphase Energy Inc. (NASDAQ: ENPH) and Plug Power Inc. (NASDAQ: PLUG) top the holdings list. You may be thinking, "Well-known? Most people haven't heard of those companies."

But that's the point. Imagine if you had invested in a company like Apple Inc. (NASDAQ: AAPL) before it became a household name. Before Steve Jobs had a movie made about him. Before everyone you know owned an iPhone. What if you'd bought Amazon.com Inc. (NASDAQ: AMZN) at its post dot-com crash lows?' 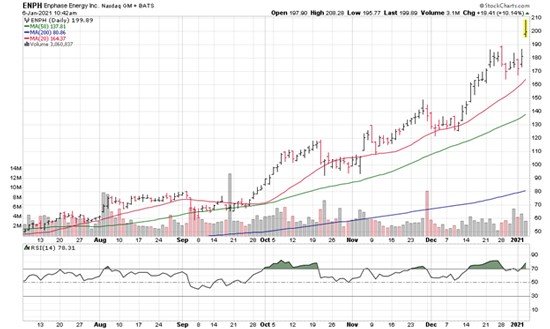 When you own ICLN, that's essentially what you're doing. And I think green energy may in fact have a smoother ride up than tech did.

That's the right kind of volatility.

Currently, 80% of ICLN shares are trading in a bull market trend, which is comparable to the Nasdaq 100's 82% reading of the same breadth indicator.

Return and relative strength, however, are a completely different story.

The Nasdaq 100, as tracked by the Invesco QQQ Trust Series 1 ETF (NASDAQ: QQQ), boasts a return of 9% since the beginning of November, while the ICLN shares are up 47.3% for the same period. Over the last year, the returns are 45% and 147%, respectively.

Get used to that differential as we head into 2021, because it's going to continue. I just sent my Strikepoint Trader subscribers a research recommendation on how they could potentially time the ICLN and generate higher returns for 2021. How high? As much as 100% possibly, within a week - you can go here and learn more about how to get those picks.

2021 could very well put even 2020's stock market returns in the shade, and not just in clean energy. Tech stocks, for instance, and even cryptocurrency seem like they're poised for breakouts. My Profit Strategies Podcast co-host Tom Gentile just sent his Microcurrency Trader readers instructions on how they could take profits on three different cryptos this week - click here to check that out. Tom's predicting Bitcoin could hit $100,000 by the end of the year, so you don't want to miss what he has to say...