Tesla Inc. (NASDAQ: TSLA) has made shareholders a fortune over the last year, climbing nearly 700% higher. That's also made the stock a prime target for options traders. 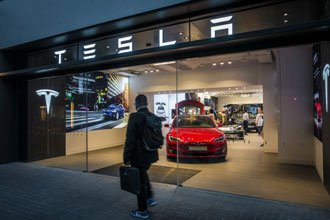 Today, we'll show you how both shareholders and traders alike can trade options on Tesla.

You see, while Tesla shares have made many rich – even 199 exchange-traded funds own its shares – investors wonder if the stock is trading in a bubble. If you own the stock, you might be tempted to sell to lock in your gains. But that could also mean missing out on another rally that could send the sock even higher.

The problem with talking about bubbles is that we really don't know when we are in one. Insiders have been selling. Pundits say it does not have enough earnings to sustain its current stock price gains. At the same time, the company is on the cutting edge of technology, from green energy to artificial intelligence, so it is hard to bet against that.

The company had quite a year in 2020, as its stock gained 743%, with another 21% so far this year. That gives it a market capitalization of about $807 billion, making it the fourth largest stock in America after Apple Inc. (NASDAQ: AAPL), Microsoft Corp. (NASDAQ: MSFT), Amazon.com Inc. (NASDAQ: AMZN) and Alphabet Inc. (NASDAQ: GOOGL). That also makes it bigger than Facebook Inc. (NASDAQ: FB). And don't forget, it was added to the S&P 500 on Dec. 21.

Founder and CEO Elon Musk also catapulted above Amazon CEO Jeff Bezos to become the richest man in the world.

But what is Tesla all about? Analysts lump it in with carmakers like General Motors Co. (NYSE: GM), but energy generation and storage are really its forte; electric cars being the manifestation of the technology into real-world products. The company is a key player in the storage of solar-generated power, so comparing its valuation to the maker of the Chevys and Buicks is not quite right.

Last year, it delivered almost 500K units, up 36% from 2019. GM delivered 771K units in the fourth quarter alone. Tesla is far from the leading carmaker.

But is Tesla in a bubble? Experts were calling for its demise two years ago, when the stock was near a split-adjusted $50. The stock did not listen. But the astounding runup has some investors nervous.

Some risk-loving traders think it is finally going to come tumbling down and want to sell the stock short. That is too dangerous. Mistiming a stock like this by even one day can be costly. And the stock is famous for burying short-sellers.

So how can investors protect themselves if and when Tesla stock finally comes back to earth? Alternatively, how can investors know when it will be time to buy back in? After all, this is still a company of the future.

Money Morning Quantitative Specialist Chris Johnson has two ideas for how to handle a major decline with options trading.

How to Lock In Your Tesla Gains

First up is a trailing stop.

A trailing stop will get you out of your shares before too much damage can be done. Simply choose a price where you'd want to get out of the stock, whether that's a 10% decline or a specific share price, and enter the trailing stop sell order with your broker. Once that stop is hit, your sell order will be executed, getting you out before the stock can drop more.

To maximize this trade, you'll want to couple it with a buying strategy too.

At the same time you set the trailing stop, you enter a limit order to buy at a significantly lower price. What this can do is protect your profits and then get you back in at a sale price.

Using options on Tesla can take your trading to the next level too.

How Options on Tesla Stock Can Make You Money

Buying put options is a simple way to hedge your position in the stock or even to make some extra cash if you're a bear on Tesla.

However, Tesla shares and its options have big dollar prices and are probably out of the reach of many investors and traders. Buyer beware. You can buy deep out-of-the-money puts where the dollar price is more manageable, but you will need the stock to really collapse for this to be worth it.

With a stock like Tesla, a big down move is not out of the question, even if the company is doing well. We are not looking to protect against a small pullback but rather that big decline that some investors are worrying about.

Remember, this is not a knock on Elon Musk and his company but rather a way to stay with it and ride out a major shock to its price. This also won't be cheap. But if you're sitting on nearly $1 million in Tesla stock, it's a small price to pay for some added protection.