Look at any stock chart and you'll see a row of candlesticks running, rising, and falling over time as the price of the shares moves on the open market.

Well, those spikes and drops are really a story unfolding.

Sometimes the story is... pretty dry, like regular earnings reports. Sometimes there's an exciting new product, like a vaccine, or a semiconductor. The candlesticks could be moving behind some earthshaking scandal or some huge change out in the world that impacts billions of lives - there have been more than enough of those lately.

And sometimes, like with GameStop Corp. (NYSE: ME), the story is even stranger.

Since the beginning of January, this stock has been through a saga that the best Hollywood writers would have trouble topping. I've been around the block a few times, and I'm not sure I can remember ever seeing anything quite like this.

It's kind of like a David vs. Goliath story - two sides are absolutely clobbering each other over this stock. They're slugging it out in the markets, in Internet forums, and it's starting to spill over onto television.

One side has sent a beloved but troubled company - that's closing stores - on a nosebleed, 428% rocket-ride over the past couple of days.

The opposition? Well, they'll do almost anything to stop them; they've put a lot on the line. Billions of dollars have been gained and lost and gained again in a matter of days - or, as of Monday, a couple of hours.

The best part is, all this drama is opening up an opportunity for small, level-headed traders to walk in, set a profit target, and get out - no matter what kind of fireworks are going on - with an absolute minimum of risk.

Just What in the World Is Going on With This Stock?

By this past December, GameStop was in pretty hot water - I'm talking deathwatch territory.

It had been four years since GME made a run at an all-time high of $31 and change. Earnings started to disappoint in 2015 and never really recovered.

The company posted an eye-watering $470 million loss in 2019, and for most of 2020, GME was trading well below $7 a share; it hit an intraday low of $2.80 in April. When the coronavirus pandemic exploded in the first quarter of 2020, GameStop management found out the hard way that gamers would rather spend an estimated $45 billion downloading fresh content from the safety and comfort of their couches than venture out to GameStop retail locations.

GOT A 10-FOOT POLE? Don't put it anywhere near these 19 hugely popular stocks. Far too many investors hold them without even knowing. Check out this free list...

For all of 2020, GME mostly sat out the huge post-COVID Crash rally, and plans were on the table to close at least 300 of its 5,500 or so outlets in North America, Oceania, and Europe.

So, as you can see, none of the ingredients for a month-long, triple-digit rally are there... so why did GME shares better than double in just one trading session? Why did this stock go absolutely ballistic in what has to got to be one of the greatest, strangest stock stories ever?

It's a case of the Internet vs. Wall Street.

Wall Street pros and hedge funds looked at GameStop and saw a company in deep trouble and thought it made a juicy short-side moneymaking opportunity. It makes perfect sense when you think about it.

These folks saw short interest rocketing on a troubled company whose product they were passionate about, and they decided to let their dollars do the talking.

They formed a kind of cohesive investing group and went gunning for the hedge fund types who were shorting their stock.

THE BIGGEST, FASTEST-MOVING PLAYS on the market, each with the potential to hand you 400% or more in a matter of days or weeks. Details here...

Short-sellers have lost $4.2 billion on GME this month. They lost $917 million on Monday, and if you think that's steep, that's less than the $1.6 billion hit they took this past Friday.

And, as of yesterday, the fans are winning... by a lot. The price action has been so crazy that the exchanges actually halted trading in GME this Monday; the stock actually doubled in one day then turned negative.

I haven't seen anything quite like it... but I also don't think we've seen the last of it. 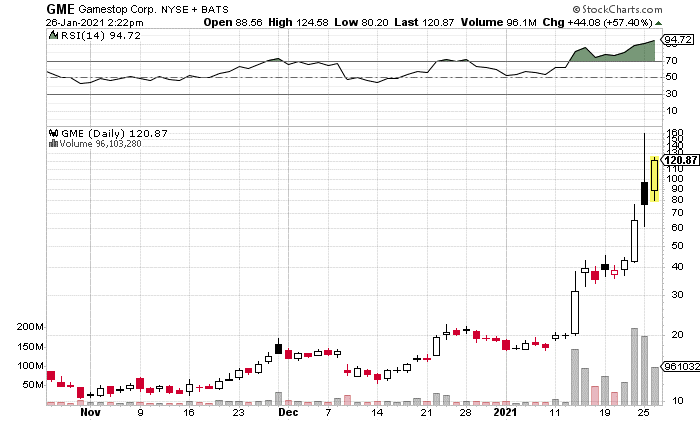 Incredibly, the short-sellers seem to be doubling down, as short interest has grown 2% in the past few days.

Which side will win? I honestly don't know.

But the genie's out of the bottle: Now, small social-media investing and trading groups are looking for stocks with relatively small floats and high short interest... and going in with guns blazing. We're actually seeing similar, but not as intense, moves in beaten-down stocks like BlackBerry Ltd. (NYSE: BB) and AMC Entertainment Holdings Inc. (NYSE: AMC), to name a few.

The tail is wagging the Wall Street dog.

There is a classic textbook short squeeze underway in GME, as the shorts scramble to buy and cover their positions. Wall Street hedge funds are losing their shirts, thanks to this "democratized" investing.

It's been incredible to watch.

Now, do I for a second think anyone should jump in here with both feet? No - the risk is astronomical, and we're talking about a spontaneous social experiment here. At the end of the day, GameStop is still a dicey investment, no matter who's piling in.

But there is a way to profit here, and the best part is, you call the shots with a fixed reward and a fixed risk.

How to Play the Big GameStop Moves

Traditional long or short options plays on GME shares are just off-the-charts expensive right now. Big, bold traders who go far out on one limb or another with puts or calls or long or short positions could end up doing okay... or they could get wiped out.

There's just no need whatsoever to take that kind of risk. Like I said earlier, cooler, calmer heads will do best here.

The smart move is simply to sell the volatility - the options premium - with credit spreads.

Now, here's where you'll have to decide what you're comfortable risking; a heart-to-heart with a licensed financial services professional could be a good idea. Beyond that, you'll have to decide which side of this David vs. Goliath battle you think will come out on top - Wall Street pros with huge short interest, or a well-motivated and surprisingly well-coordinated group of smaller investors.

If you're bullish on GME, you'd set up a put spread. If you're bearish, it'd be smart to build a call spread, and if you're neutral, which you may very well be... just sell both.

Now, when you construct a credit to spread by selling a higher-priced call or put, you can protect that with the purchase of a lower-priced option of the same type.

To select the right strike prices, you would look just out of the money (OTM); in other words, just $5 or so above or below, depending on your outlook, where the stock is trading at the time you set up the trade.

Whether you're bullish, bearish, or even neutral on GameStop, the net result of any of these spreads is a credit in your account as you pocket the difference in premium. And with a time horizon of just one week, a trader wouldn't have to spend too much time in the crossfire.

It's not all that different from the "Four-Day Profit Cycle" I've talked about many times before. Yes, profit potential like that is possible in 100 hours or less; it could help take a small account and 10x the money in just four months. It's helped some of my followers get a crack at some nice gainers recently.

The bottom line is, a credit spread is the easiest, safest way to participate in the incredible GameStop story while still managing to sleep at night.