Traders who hang around a Reddit board called WallStreetBets have been getting together to make bets on a bunch of stocks over the last few years. One of those stocks was GameStop Corp. (NYSE: GME). 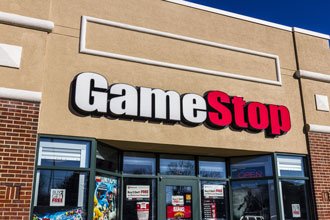 One of these would-be traders noticed that shares of GameStop were heavily shorted.

The Reddit traders started buying the stock and short-dated call options to drive out the shorts.

You see, when traders sell a stock short, they borrow the shares, sell them, and then plan to rebuy them later at a lower price, netting a profit. But when share prices start climbing, they're forced to cut their losses and buy back the stock at the higher price or else risk financial ruin. This is called a "short squeeze," and the buying from it, called "short covering," also helps push the share price higher.

When you see a stock with a lot of short positions and a rising price, then the coming short squeeze can be a big catalyst to shoot the stock price higher.

And that's exactly what happened with GameStop.

The stock has gained over 1,500% based on nothing more than aggressive buyers in the last month.

The business did not get better. GameStop did not turn an unexpected profit. A bunch of folks who troll the Internet combined forces to push out the shorts at a catastrophic cost.

A $12 billion hedge fund had to look for new backers after losing a fortune of its GameStop short position.

While the Internet's frenzy over GameStop has turned it into the biggest story on Wall Street today, short squeezes are a real catalyst.

Today, we're going to show you the three of the most shorted stocks with the biggest chance of a short squeeze pushing shares higher over the next few months.

Most Shorted Stocks to Trade

AMC Entertainment Holdings Inc. (NYSE: AMC) has to be on the list.

As we said last week, if it could get financing, this stock could be a 10-bagger in no time. No one expected CEO Adam Aron to be able to raise the cash he needed to keep his chain of movie theatres open until the end of the year. He was able to borrow another $411 million against AMC's European assets and sold $506 million worth of stock.

Bankruptcy, Mr. Aron said this week, is off the table.

That started the stock moving higher, but that could just be the beginning.

Almost 70% of the float of AMC is short. Most people who are fans of shorting stocks had shorted shares of AMC, and there was a good case for the company to be forced into bankruptcy. Private equity firm Apollo Management (APO) and distressed debt firm Canyon Capital owns most of the debt, and it was pushing for bankruptcy.

Now that Mr. Aron has pulled the rabbit out of his hat, I would not be shocked to see the Internet swarm come for the heavily shorted stock. That could send the stock moving higher rapidly. This could lead to massive gains even after the move the stock has made this week.

Bed Bath and Beyond

Bed Bath and Beyond Inc. (NASDAQ: BBBY) is another heavily shorted stock that gets a lot of attention on the Internet right now. A boring brick-and-mortar retailer that sells home furnishings would not usually attract much trading interest.

But traders don't care if the company sells linens, video games, or widgets.

All that matters is that there is a high enough short interest that when tens of thousands of them jump in as buyers of stock and call, shorts will have to run for the hills at any price.

Roughly 66% of the float of Bed Bath and Beyond is sold short, so the move could be explosive if enough of the lurkers jump on board the trade over the next week or so.

In fact, the buying pressure has already started. The stock us up over 80% in the last week. The shorts are starting to sweat.

FuboTV Inc. (NYSE: FUBO) is another heavily shorted stock that could explode higher because of a short squeeze. The company is in the streaming content business. Fubo has content from most major networks and is heavy on sports content, with just about every sport imaginable available to stream on almost any device.

Fubo recently made some acquisitions that help the company move into sports betting as it spreads across the country.

The combination of streaming and betting makes FuboTV sound like a dream stock to own in 2021.

It is in some ways, but Fubo had an IPO back in October, and shares that have been restricted are becoming eligible for sale. There are a lot of people short the stock expecting the end of the lockup period to push the stock lower. The lockup at the end of December allowed another 88 million shares to be sold.

Only about 500,000 shares have been sold, but some analysts expect more to be sold.

Outspoken short-seller Rich Greenfield of Lightshed Partners has said that his price target is $8. The stock trades for over $53 now.

But the shorts are taking a big risk. The combination of sports betting and a high short interest could send this stock flying higher.

Over 60% of the float is short, and some shorts have large positions. That could make it difficult for them to cover quickly, extending the squeeze.