The other day, I mentioned GameStop Corp. (NYSE: GME), as a trade or a buy, is radioactive right now. The stock is off-the-charts expensive, totally divorced from fundamental reality - and most of the options you can trade on it are just as bad.

Other beaten-down stocks the Redditors have set their sights on, like AMC Theaters Holdings Inc. (NYSE: AMC), Bed Bath & Beyond Inc. (NASDAQ: BBBY), and a few others, aren't much better.

Ultimately, these stocks will likely sink again, which, at any other time, would make for a compelling short play, but conditions are so volatile, spreads are so wide, that, for the most part, trading them is neither feasible nor sensible right now.

All the same, I think there's still money on the table, from what will ultimately be downside moves. It'd be a shame to just leave it lying there.

I found a fantastic trade on my screen the other day that I'm calling a "back door" to all this.

You can put this trade on for a fraction of the cost and risk of coming anywhere near stocks and options the Redditors are controlling right now.

The Retail Sector ETF Is Getting Thrown for a Loop

It's not surprising when you think about it: GameStop is having a sector-wide ripple effect.

Those effects are obvious when you look at the SPDR Select Sector Retail ETF (NYSEArca: XRT). 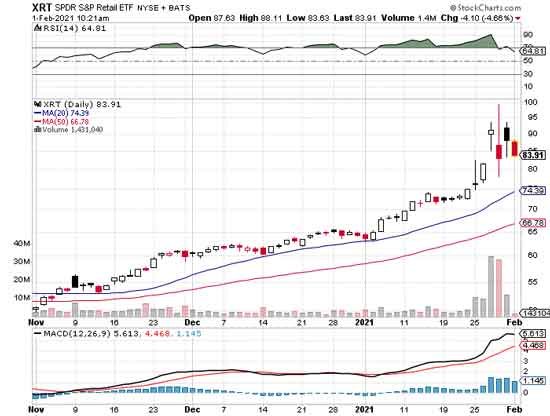 XRT gets you exposure to 95 S&P 500 retail stocks from every corner of the sector. It's tempting to think of the entire retail sector as "GameStop... and these 94 other stocks" right now, but there's more to it than that.

Now, it's true that, as of today, GME is the 800-lb. gorilla in XRT's tree. Its shares count for a bit less than 20% of XRT's holdings by weight, when they should come out to around 1%, but that's the kind of impact the Reddit-savvy day trading crew is having right now.

But dig a little deeper, and we'll see some familiar, welcome faces that have handed us some nice profits over the past 11 months or so....

XRT itself is up more than 29% since the start of the year, but, over the past week or so, XRT has seen around $700 million in outflows, or around 80% of its assets. You usually don't see that in an ETF that surges 20% in a week.

GOT A 10-FOOT POLE? Don't put it anywhere near these 19 popular stocks. Get the free list here...

I've heard and read some interesting theories as to why. XRT offers in-kind redemptions, which means ETF shares can be exchanged for actual stock the fund owns.

Now, there weren't a lot of GME shares when this stock was trading at $5, only around 69 million or so. But now that the stock's gone several thousand percent higher, demand is, well, higher, and with buying restrictions kicking in left and right across popular investing apps, they're that much harder to come by.

There's a frenzied treasure hunt on for GME shares, in other words, and speculators figure they'll just take the ones XRT owned.

If that weren't enough, GameStop is sliding sharply as I write this, down nearly 30% for the day, and that's dragging XRT down, too.

I think it's going to go even lower.

This is creating a dynamite trade opportunity right now, with XRT acting as a "stand in" for GME, at a fraction of the risk and cost.

I'm not sure how the Reddit vs. Wall Street slugfest will end, but I'm pretty sure it won't end with GameStop at $350 a share. "What goes up must come down" is a cliché for a good reason. Same goes for the other newly popular stocks the day trading crowd is into right now; sensible investors should consider those off-limits until further notice.

The safest profits right now will go to investors and traders who can see how the ripple effects from GME, BBBY, and others will move through the markets. XRT is a great example of that.

With all that said, the market's most dangerous stocks aren't necessarily the ones making headlines today. My friend and colleague, Shah Gilani, has a list of 19 companies he thinks are pure poison right now. Even better, he's naming five stocks to consider buying instead. Watch him here...

Chris that is an excellent idea. If not for gme, xrt has a pretty solid flat line around 50. I recognized the short squeeze early on and have been trying to figure out a reasonable longer term short situation because that stock is not worth more than possibly 30 bucks. I opted for the September 91 put at $9. This third stimulus will probably keep the economy hot until then so hopefully the gme short squeeze will end stronger than any further potential increases in the retail recovery. Well let's see how it goes. Thanks