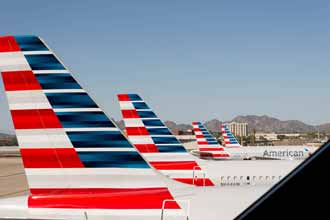 American Airlines Group Inc. (NYSE: AAL) got caught up in last week's short squeeze lotto for a few days and then crashed back to earth. It quickly fell back near the starting line, but it did cause many people to wonder when to buy shares of American Airlines again.

The road to recovery may be rough, but there are signals to watch for in the market that could give you the answer. We cover those today...

Right now, the vaccine is being rolled out, and everyone should start feeling pretty good about traveling soon. That is the most optimistic scenario.

We see a successful rollout of the vaccine across the bulk of the United States population by early to mid summer. People begin to feel comfortable flying once again, and business picks back up by the third quarter of 2021.

However, the other, and probably much more realistic, scenario is that we continue to screw up the vaccine process, and it's late summer before the vaccine is made available to everyone.

There is also a significant chance that if the pace of vaccination does not accelerate dramatically around the world, one of the newly mutated strains that are more vaccine-resistant stages a massive outbreak somewhere in the world.

Even if that outbreak does not occur in the United States, it will cause travel bans and lockdowns to continue elsewhere in the world.

First, let's talk about how American Airlines stock is positioned to take that on. After that, we'll look at a couple buy signals you can use to anticipate a rebound.

Even with some parts of the world opening for travel, American has been burning about $30 million a day. That's not sustainable.

Even after receiving another $3.1 billion of payroll support in the latest stimulus package, bringing the total in bailout payments to about $9 billion, American executives have told its unions to be prepared for furloughs when the program expires in April.

Leisure travel will return before business travel gets back to 2019 levels. Once vaccinations are widespread, there will be an explosion of pent-up demand to go see the grandkids or take a vacation.

Businesses that have saved billions in travel expenses may not be so quick to give up on Zoom meetings right away.

American does not compete well with low-cost carriers in vacation markets. To fully recover, it needs to see a full return of business travel.

We do not think we see that in 2021. So, then how do you know when American Airlines has hit a bottom?

When to Buy American Airlines Stock

There will be two ways to tell it's time to buy shares of American Airlines. The first will be when a credit rating agency raises its rating for the airline's loans, bonds, and equipment trust certificates.

The last rating change for American Airlines was back in September, when Fitch joined Moody's and Standard and Poor's in downgrading the bonds to a "B-minus" with a negative outlook.

At the time, Fitch analysts said that "Fitch Ratings has downgraded American Airlines to 'B-minus' to 'B.' The downgrade is driven by a slower than expected rebound in air travel related to the coronavirus pandemic. The likelihood that air traffic will remain subdued for the next several years combined with American's heavy debt load creates significant pressure on credit metrics throughout Fitch's forecast period."

None of the major ratings agencies have given any indication of raising the level anytime soon.

You might miss a small part of the move if you wait for an upgrade in American Airlines debt. But you will add a huge margin of safety to the position.

It does not hurt to miss out on the first 20% or so when you are looking for a move of three to four times the current stock price.

The other strong buy signal would be an insider buy of $1 million or more of stock in the airline. If conditions have improved to the point that an officer or director of the company was milling to lay out seven figures to buy more shares, you can have a high degree of confidence that the bottom is close at hand.

In 2016, when American shares were plunging, Director Jeffrey Benjamin stepped up and bought $1.1 million worth of stock. The shares bottomed out within weeks and went steadily higher for the next two years.

There will be rumors and potential short squeeze talk surrounding American Airlines all year. We expect the stock will be quite volatile.

The buyable bottom is not in until there is either a credit upgrade or a seven-figure cash purchase of the stock by an insider.