They can be good, but they can also be crowded, which puts you at a real risk of getting "bandwagoned" (if there's any bandwagon, make sure you're the one driving it).

But now that most of the "headline" earnings reports are in, we can turn our attention to the really juicy opportunities out there - smaller stocks that can make bigger moves and yield bigger payoffs.

I've got two in mind to show you. Interestingly, they've just reported earnings - so there's no need to try and time the whole "buy the rumor sell the news" thing.

All we have to do is buy the stocks and pocket the profits...

We're about to head into a few weeks of smaller, lesser-known companies' reports. I've always found them a bit more exciting because there aren't 287 different "Buy/Sell/Hold" recommendations on them; there's not as much published analyst research.

23 and 0: Tom Gentile's used his revolutionary trading method to rack up a 100% win rate - 23 wins, zero losses - since April 2020. He doesn't see this profit potential slowing down anytime soon. Learn what's next here...

This is the period of earnings season where savvy investors who have good data will be rewarded. And folks, I've got some great data...

Tractor Supply Co. (NASDAQ: TSCO) is decidedly not a household name - it doesn't make iAnything, you can't read the latest controversial hot takes on its feed, and it doesn't stream anything.

Nevertheless, the stock is big enough to move the needle. It's an agriculture, home and garden, repair, and livestock and pet care retailer with a sizeable nationwide presence - around 1,800 or so locations.

It recently reported earnings, but I'll be damned if Wall Street noticed. Just 24 analysts covered the stock, and 16 of 'em said it was a "Hold," which is the first clue that the stock isn't exactly "over-loved." 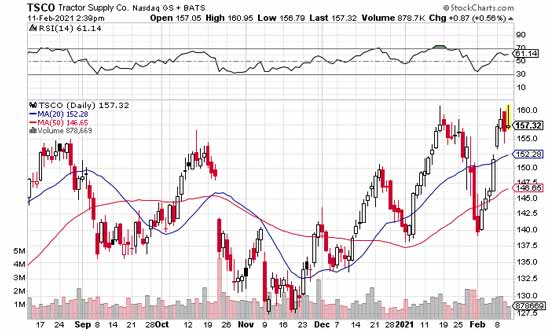 The chart looks just as good as can be - the stock is well above its "trader's trend lines," 50- and 20-day moving averages, with a relative strength index (RSI) reading of just over 61. That tells me this stock has plenty of room to run and take out its old highs.

Martin Marietta Materials Inc. (NYSE: MLM) tells a similar story - unless you're in the aggregates and heavy building materials business, you're probably not familiar. But that business focus puts Martin Marietta pretty much first in line for the post-pandemic economic recovery that's beginning to unfold. It's also sure to rise behind the many infrastructure projects this administration has planned.

WORST CASE: You could own one of the best stocks available, possibly at a steep discount. Best case? With the right stakes, you could potentially add thousands of dollars to an account on a near-weekly basis. Find out what this is about... 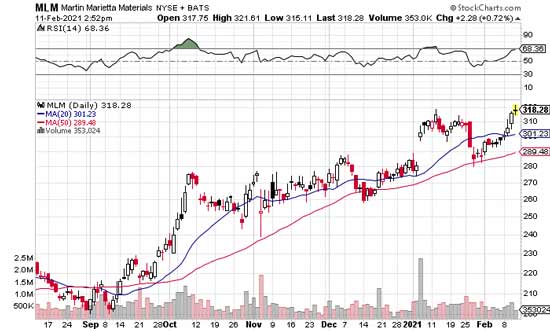 The MLM chart isn't quite as pretty as Tractor Supply's, but it's looking very good just the same. It's above its short- and medium-term trend lines, but its RSI reading is a tad high. Still, the balance of evidence says this stock has (a) taken out its 20- and 50-day and (b) should probably go much higher. Even that higher RSI isn't terribly troubling, because should it kick over into "overbought" status, entry points could get even better.

The long-term trends imply that MLM and, to be frank, most materials companies are in a place where they could potentially outperform the big-cap tech firms that held the market through such challenging times in 2020.

That was a tough year by many counts, but in the middle of it all, my friend and Profit Strategies Podcast co-host Tom Gentile was actually putting together his best year ever. Starting in April, not long after the crash, he began riding his most effective trading strategy to notch his best win rate, his biggest gains, and his fastest trade recommendation times - all culminating in a 100% (23 wins, zero losses) success rate. You can go here to learn about it before the next round of picks...