One of the biggest stories in the stock market this year has been flying under the radar, buried by politics and pandemic worries. But that's an opportunity for investors who spot it first. We'll show you just how to do it. 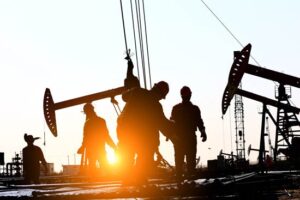 You see, since the pandemic crash last spring, oil has taken a beating. Oil prices fell so low last May that you couldn't pay people to take it. But that was nearly a year ago. Nowadays, oil prices are at $60 a barrel for West Texas Intermediate.

Oil stocks are the big winner here, but they still haven't recovered from last year's madness. They are going to.

Crude will keep marching higher as the economy revs back up and demand for jet fuel, gasoline, and even the regular winter heating oil expands. Domestic supplies are down by nearly 7 million barrels, and the oil market has now logged its longest win streak in over two years.

Oil stocks are responding despite people focusing on cleaner forms of energy. Even Money Morning Quantitative Specialist Chris Johnson is looking at what he calls "old-school dirty energy stocks" to be the biggest winners here.

Chris has a trade using a top oil stock he thinks could explode 50% higher by summer, one you can leverage to a 180% profit with options...

SPDR S&P Oil & Gas Equipment & Services ETF (NYSEarca: XES) is an ETF that tracks a basket of 23 energy equipment and services stocks, but it does not include the big international oil stocks. It has doubled in price since late October, but it has been in a major bear market since 2014, when it traded above $400 per share.

Shares of XES have already moved above their 20-month moving average, which is a good first sign of a major trend change. They've also broken out from a bearish two-year trend line.

Chris is not looking for that $400 price. But he does think it can reach $75 in the coming months. That would be another 50% gain.

Of course, we can juice that a bit with options without much additional risk. In fact, a call option would reduce risk because its up-front cost would be so much lower.

Of course, there are no guarantees. But to make money trading stocks, you have to set yourself up for success. That means spotting trends, finding the right stocks to take advantage of the trends, and building a trade that maximizes upside while limiting risk.

That's why we like to use options in these situations. Since options have a lower up-front cost, you don't need to pay as much to get into the trade, but your upside can be just as high as if you'd bought shares of the stock.

If you're interested in learning more about how options can maximize your potential gains, check this out...