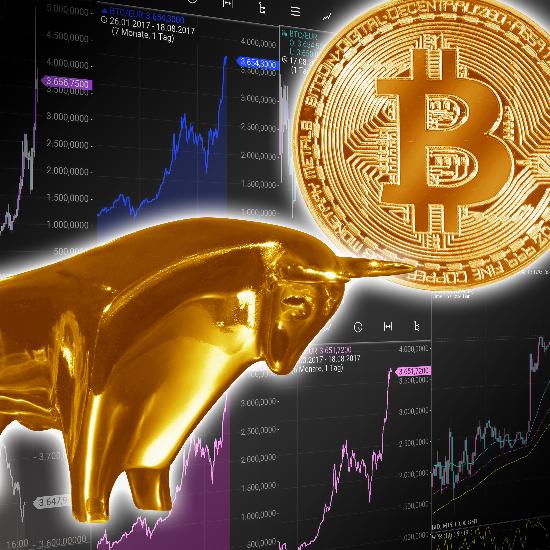 After all, Bitcoin was trading at about $10,217 at that point, down 48% from its previous all-time high in December 2017. Many skeptics doubted Bitcoin would ever get back to $20,000, much less five times that.

In fact, I think it's too conservative. That's why I'm revising my Bitcoin price prediction to $100,000 by Labor Day - just a little over six months from now.

I think it's very likely not just because of the No. 1 cryptocurrency's dramatic surge in price, but also because many of the factors powering Bitcoin continue to intensify.

Let's dig in to the details...

Why the Bitcoin Price Keeps Going Up

A big part of why I've revised my forecast lies in the thesis behind the Bitcoin price prediction I made in 2019.

That story focused on two main points: The halving of the Bitcoin block reward, which took place last May, and the "stock to flow" model of determining a commodity's value.

The halving has to do with newly mined Bitcoins. The system is designed to cut the reward for each mined block by half about every four years. Originally, the reward was 50 bitcoins; the three halving events have cut the reward to 6.25.

As just about every investor knows, price is a product of supply and demand. The supply of new Bitcoin is designed to shrink over time, with an ultimate cap of 21 million.

These concepts plug right into the stock-to-flow model. The idea is that you take the existing "stock" of a commodity and divide it by the fresh supply that's added every year (the "flow"). The higher the number, the higher the value. 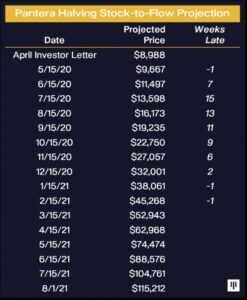 The designed reduction in the supply of new Bitcoin ensures that its stock-to-flow ratio will keep rising, resulting in climbing prices.

Projected into the future, it also predicted a major rally starting in the latter part of 2020 and resulting in a Bitcoin price north of $100,000 by the end of 2021.

That chart has Bitcoin hitting $100,000 as early as mid-July. And as you can see, the Bitcoin price has tracked it pretty well, especially lately.

But Pantera isn't basing its prediction solely on the stock-to-flow model. It cites several other factors - and it all meshes well with what I've been saying for years.

Why Big Investors Are Buying Bitcoin

One of oldest arguments for Bitcoin is that it serves as hedge against steadily devaluing fiat currencies like the U.S. dollar.

The U.S. money supply is ballooning like never before, the result of stimulus policies launched in response to the 2008 financial crisis and accelerated during the COVID-19 crisis.

It also means that more than one-fifth of all of the U.S. dollars in existence were created in 2020. That's a big reason why investors have been snapping up deflationary Bitcoin.

And we can expect more of the same in 2021 with President Joe Biden's $1.9 trillion stimulus package teed up and ready to go. On top of that, President Biden has proposed a $2 trillion infrastructure plan.

Meanwhile you have central banks keeping interest rates near zero - and even below zero - adding to the inflationary pressure on fiat currencies.

Big investors like Bitcoin as a hedge against inflation as well as an asset mostly uncorrelated with stocks.

Here's how that's been translating into real-world buying...

What Makes a $100,000 Bitcoin Price Prediction in 6 Months Realistic

Earlier, I talked about the tightening supply of Bitcoin; now let's look at the surging demand.

Institutional investors have also played a big role in the current Bitcoin rally. In 2018, I predicted these deep-pocketed investors would start pumping money into Bitcoin as soon as there was sufficient infrastructure.

Last year, as that infrastructure came online, we started to see that flow of institutional money into Bitcoin.

The assets under management (AUM) of the Grayscale Bitcoin Trust (OTC: GBTC), which caters to big investors, zoomed from $1.88 billion in January 2020 to $17.48 billion by the end of December. In just the past six weeks, GBTC's AUM has almost doubled to $30 billion.

As the year wears on, FOMO (fear of missing out) will kick in.

Extra: The five BEST stocks to buy in 2021 and dozens of popular stocks to avoid at all costs. Watch now...

"What we didn't want to have to do, was turn around to our investors and say, 'we're selling some gold to buy Bitcoin, because it's an alternative to gold and we're paying $100,000 for Bitcoin because we've waited to see what happened,'" Russell told Business Insider.

This opens the door to more companies following suit. S&P Global estimates U.S. corporations alone have $2.5 trillion in cash on their balance sheets.

And they've already started moving into cryptocurrency, as the dramatic rise of Dogecoin has shown (I expect they'll soon realize the error of investing in a joke coin and migrate to more robust cryptos like Bitcoin).

How to Play This Bitcoin Rally

Add it all up, and you have a situation where could double your money in just six months. This is why long-time Bitcoin enthusiasts "HODL" - they know in the long term, Bitcoin still has a long way to go.

If you're new to Bitcoin, think about opening a position. Though investing in cryptocurrency may seem daunting, everything you need to know is in the Money Morning guide on how to buy Bitcoin.

As for strategy, I always advise people to invest only what they can afford to lose. As a rule of thumb, I suggest allocating between 2% and 5% of your portfolio to Bitcoin, depending on your risk tolerance. Despite the huge potential, investing in any crypto is also very high risk. It's still a very new and very volatile asset class.

If you start a position in Bitcoin and it does indeed go up to $100,000, as I expect, the best strategy would then be to take some of your money off the table. If you sell enough to get back your original stake while letting the rest ride, you'll be playing with "house money."

One reason to do this is to shield your investment from a likely Bitcoin crash. Historically, Bitcoin has crashed hard after each major rally. That's why you'll want to take some money out after you've made a large profit.

That way you can weather a crash and wait patiently for the next rally, which will start in late 2024 if Bitcoin stays true to the stock-to-flow model. That cycle will take Bitcoin to much higher levels - most likely somewhere between $500,000 and $1 million.