Then again, I've been bullish on Bitcoin and other cryptos for almost a decade, even before I started publishing my Microcurrency Trader research.

But here we are: Bitcoin just put $51,000 in the rearview mirror, and we haven't even finished the first quarter yet! It really goes to show you the sheer bullish power of everything that's happened over the past few months...

First we saw PayPal embrace Bitcoin, then Square, then another flood of institutional money, and of course now Tesla's putting around 5% of its available cash into Bitcoin.

If you've been following along with me, you've easily doubled your money on the granddaddy of crypto - and done even better on the other, smaller microcurrencies we've looked at. It soared 313% in 2020 alone.

So right now is as good a time as any to update my Bitcoin prediction and make sure we're in the best possible position to profit from it.

This is a gutsy call, but all my charts, data, and experience tell me that Bitcoin is making a serious, sustainable run at $100,000 this year.

Mike Novogratz, founder of crypto investment firm Galaxy Digital, has called for this same kind of performance. So has Vikram Rangala of ZebPay, Tesla's Elon Musk, of course, Brian Estes of Off the Chain Capital, and even hardcore "gold guy" Peter Schiff have all said it's either possible or likely.

Interestingly, JPMorgan Chase & Co. analysts have said the same thing. More importantly, JPMorgan and Morgan Stanley are both rumored to be eyeing up Bitcoin positions, as are BlackRock and BNY Mellon.

GOT "FOMO?": Bitcoin has jumped past $50,000, and lots of investors are feeling the fear of missing out right now. There's still time to act, but as the chart in this forecast shows, in a very short period of time, it could be too late. View...

In fact, in a note last month, JPMorgan said if the total private-sector investment in Bitcoin equaled that of gold - bullion and ETFs - we'd see Bitcoin hit $146,000.

Just think about it! From there, the sky's the limit. As you can learn about here, my ultimate prediction is $500,000 by the end of the decade.

One hundred and forty-six thousand dollars this year would be great - and, to be clear, I do think we'll get there - but let's not get ahead of the game here. I think Bitcoin hits $100,000 in nine or 10 months, easy. That would be a little less than a 50% advance from today's prices, after it's come a little more than 76% so far this year.

At that rate, 50% in under a year looks kind of conservative, but it's a sensible place to start.

Volatility Isn't Quite What It Used to Be

The doom and gloom crowd is saying Bitcoin's rally isn't "sustainable" and that there's too much "volatility." But they've got short memories.

If you've been in Bitcoin for the long haul, you'll easily remember the whipsaw 2017 Bitcoin rally that saw the crypto hit and top $20,000... before crashing to $3,000. Well, according to Bloomberg and this chart from Woobull, Bitcoin's current 60-day volatility is less than half of the 23%-plus realized during the 2017 run. 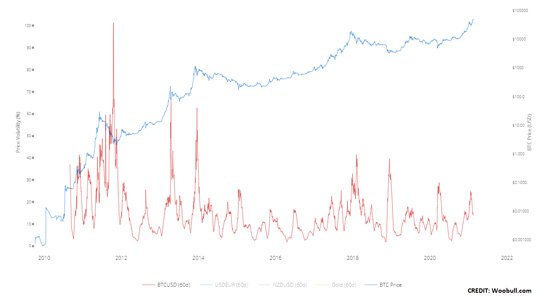 It's still much more volatile than gold, but much, much calmer than it's been.

RELATED: Almost nobody seems to be paying attention to this unique crypto phenomenon, but Tom's uncovered double- and even triple-digit moves in a matter of days nearly every time Bitcoin jumps. Watch...

The big institutions that have become so important to Bitcoin's bullish rally are hanging tough, too. Derebit Insights reports the big money isn't too worried about a sharp fall - most options activity shows a hard floor at $40,000, which jives pretty well with what we've seen so far.

My Microcurrency Trader readers can expect to get my latest research on short-term Bitcoin prices, including resistance and support. But the big, institutional investors aren't worried about much of a drop.

In fact, Bitcoin may have to move a little lower in the short term to knock out the weak money, consolidate, and move higher; if we see Bitcoin go back and test $47,000, at the end of the day, that's a long-term bullish move.

The bottom line: Be in Bitcoin. Jump on any short-term move lower and ride it higher for the long term. If you're put off by the price tag - which, hey, I understand - remember that any Bitcoin exchange will let you buy fractions of a Bitcoin, like $5,000, $500, $50, virtually any amount. Make sure you've got some exposure to a quality Bitcoin-related ETF, like the Grayscale Bitcoin Trust ETF (OTC: GBTC), which you can buy and sell just like any stock. (Not surprisingly, Grayscale is extremely bullish on Bitcoin, saying "we are headed higher" - couldn't have said it better myself.)

I've never bought a stock but I'm interested in buying Bitcoin. How do I buy it?

Great question, thanks for reaching out!

We actually have a detailed guide to buying Bitcoin available, just CLICK HERE to read it.