Hey, what happened? Just when everyone was getting used to stocks going up and up, the market hits the brakes, big-time!

It's been a tough few days for stocks, but it's not the worst we've seen. The last two sessions haven't been so bad, and, after Fed Chair Jerome Powell's second day of testimony, the Dow is actually inching up on Wednesday afternoon as I write this.

Trouble is, the Money Calendar and Jerome Powell are telling me two different things.

The Fed chair is saying the Fed won't tighten up policy anytime soon, which sounds like good news for stocks, but then the Money Calendar is saying we haven't seen the last of the selling.

So who's right? I think they both are. In the long run, I don't think the bull market's going away, because ultimately Chair Powell's got the firepower to make sure it keeps on keeping on.

But the Money Calendar's never let us down before. I think we should get ready for some more selling in the short term, and I'll show you why in a second.

Even better, the Money Calendar is pointing at a fantastic profit play for this kind of slump. This trade's got it all - it's cheap, for one, and it's finished in the green for eight years in a row, so it's a tradeable pattern.

Best of all, it's offering way better than double-the-money profits in five weeks or less...

So investors stopped counting their profits and started worrying about them.

The market made a huge deal out of Tesla's $1.5 billion Bitcoin position (and it is a big deal), and when they saw Bitcoin tumble during the past few days, they panicked over worries about the market leader's Bitcoin exposure. The stock is still down close to 7%, but Bitcoin is charging right back to $50,000, just like I predicted. (I really hope you used the dip as a buying opportunity.)

The market is starting to see the end of the pandemic and the accelerating recovery, but the worry there is that there's so much pent-up demand that consumers will rush in and flood the economy with cash to spur inflation at a time when yields are creeping up anyway - even though if they spiked 50 basis points, they'd still be some of the lowest in history.

Even if it does create a little inflation, pandemic recovery's going to be a good thing for the economy overall. Some cyclical stocks like energy and financials are rising alongside yields, oil, and metals prices. The end of the pandemic is more or less in sight, so we should probably expect money to come out of "pandemic plays" like tech stocks and online retail and into stocks that are more directly tied to a rising economy.

I'm not even all that surprised that the market's sluggish, considering the time of year.

Don't Fight It: The Trend Is Bearish for Now

Earnings season is more or less over, and like you can see on the Money Calendar screencap here, the trend is bearish for about the next two weeks or so. In fact, we're entering one of the most seasonally weak times of the year.

So we've got maybe eight whole trading sessions on our hands where the really easy moneymaking opportunities will be in trades that go up when the market goes down, or trades that will go up because the market's down.

That points us toward a bond market trade. I'm talking about good old TLT, the iShares 20 Plus Year Treasury Bond ETF (NASDAQ: TLT).

WORST-CASE SCENARIO: You get into what could be the market's best stocks, possibly at a nice discount. Best-case scenario? With the right stakes, you could add thousands to an account on a near-weekly basis. You've got to see how this works...

Like I said, yields have been creeping up lately, and that's one of the reasons investors are freaked out right now - when yields climb, stocks drop. And you can see here, sure enough, bullish TLT trades have been 90% successful if closed out before April 2 for nine of the past 10 years. A lot of that is due to the seasonal moves out of stocks and into bonds this time of year. 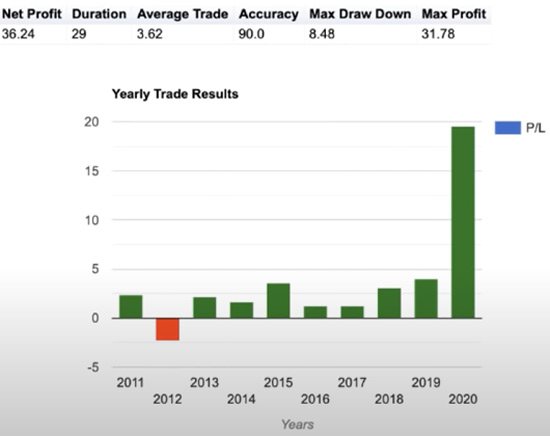 In fact, this trade's been profitable for eight years in a row. I should mention, though, that the 2020 performance you see here is really an outlier. Remember, the market was absolutely tanking at this time last year as the coronavirus took hold, and just about the only thing going up was the bond market. The only time this trade didn't work out was in 2012, and the typical bullish move is a little less than five points.

So we're going to proceed with the pretty safe assumption that TLT will have moved up around five points on or before April 2.

Since the markets are closed for the traditional Good Friday holiday on April 2, we want to look at options that expire on that Thursday, April 1.

I think the smarter move is a "loophole" call spread trade, where we sell a higher-strike call and buy a lower-strike call.

We get to cut our risk almost in half, from $300 total to just $157. That lowers our breakeven to just above $144 and at the same time increases our profit potential to as much as 154% - way better than double the money. All that needs to happen for the maximum reward is for TLT to hit $146.50 on or before April 1, and I think there's a good chance we'll see that happen, given the seasonality.

Like I said, I don't think the downturn's going to last all that long, and I'd expect this trade to hit profit targets before April 1. This is the easiest, lowest-risk way to make what could be some hefty profits while everyone else worries about theirs.

"Loophole" spread trades are just one way to target stock profits. I've been working on what could be an even better strategy - one that helped me get set for my best year ever in 2020. I'm talking about a 100% success rate since April 2020, with 23 wins and ZERO losses. Let me show you...