On Friday, Bitcoin handed investors a big opportunity to add to their position at $48,000.

I hope everyone jumped on the chance, because like I've been saying, I don't think these prices will last. I've got a long-term price target of $100,000 on the major crypto. And I'm seeing some really bullish signals I'll tell you about that have been lost out there in all the "noise" about Bitcoin's drop below $50,000.

It wasn't all that surprising that we didn't hear much about software company Microstrategy's big, aggressive Bitcoin buy at just below $49,000. The Bitcoin-bullish company bought another $10 million of the cryptocurrency late last week, which brings its total holdings to something like 91,000 bitcoins worth $4.3 billion – Microstrategy is a big "buy the dip" player when it comes to Bitcoin. It's a smart move.

The truth is, there are a ton of profit opportunities out there in cryptocurrencies right now – in Bitcoin, sure, but also some "Bitcoin stocks" I follow, and there's a lot going on with two smaller, lesser-known cryptos I like to call "microcurrencies."

This Could Be 2021's Best Entry Point

Bitcoin is an $894 billion giant, and no matter what some bears might say, it's well inside the mainstream; thanks to companies like PayPal, Square, and Visa, and billions in institutional investment, we're long past that tipping point.

NEXT MOVE: Bitcoin could be gathering strength for a possible breakout. There's still some time to act, but as the chart in this forecast shows, it could soon be too late. View here…

It's so big that it helps support an entire industry that's dotted with great "Bitcoin stocks" to own. These companies are usually highly correlated with Bitcoin, meaning when Bitcoin moves up or down, so do they. To put it another way, if you're only buying Bitcoin, you're missing out on that much more profit potential.

Right now, some of these companies have moved into irresistible spots. Grayscale is one – Grayscale itself is a huge Bitcoin investor; as of the end of last week, it reported owning more than 655,000 bitcoins. But it offers a product that anyone can buy or sell, no matter how much or how little Bitcoin they own.

The Grayscale Bitcoin Trust (OTC: GBTC) is an investment vehicle that gets investors exposure to Bitcoin prices. You can buy and sell all the trading day through your brokerage account, but at a tiny fraction of Bitcoin’s price.

Right now, GBTC is trading at a massive discount to net asset value (NAV) – almost 12%. There are a couple of different complicated reasons why this could be happening, but the bottom line is this is the biggest Grayscale buying opportunity since 2013. 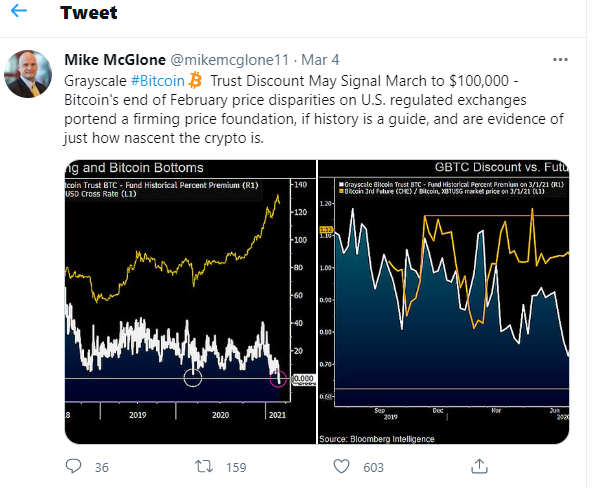 It could also be a big bullish sign for Bitcoin itself. Bloomberg Intelligence Senior Commodity Strategist Mike McGlone tweeted the big discount could very well signal a price “floor” in Bitcoin itself and the start of a new leg up that takes us to $100,000 – something I’ve been predicting for a few weeks now.

This Miner Is Solid Gold

Riot Blockchain Inc. (NASDAQ: RIOT) is a Bitcoin "miner" – the biggest in North America – with a $2.7 billion market cap.

Not too long ago, individuals could mine Bitcoin themselves with the right specialized computer equipment and some patience and be rewarded. But by now, the computing firepower needed to mine those coins has grown exponentially, meaning usually only corporations have the resources needed to mine commercially significant quantities of Bitcoin.

RELATED: Seems like nobody's paying attention to this unique crypto phenomenon, but Tom's uncovered double-, even triple-digit moves in a matter of days nearly every time Bitcoin jumps. Watch…

Because Riot's business is Bitcoin, its share price is highly correlated with the cryptocurrency itself. All of Riot's revenue is in Bitcoin; it mined 222 coins in the third quarter of 2020, which, going by today's price, would be north of $10.5 million. 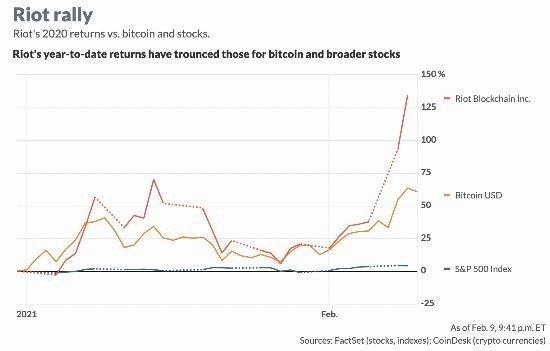 RIOT shares outperformed Bitcoin in 2020, which, when you think about the year Bitcoin had, is really impressive. This stock did around twice as well as Bitcoin itself.

Riot stock is down a little more than 51% from its mid-February highs, but given everything we know about Bitcoin and where we expect it to go, this is a great place to get in. A word of caution, though: Riot can be volatile, so think hard about your risk tolerance and consider using a small, speculative portion of your capital here.

And don't forget the two small microcurrencies I recently told you about.

These Can Bring Even Bigger Profits Than Bitcoin

If you missed it these past two weekends, I put two very small, lesser-known cryptos out there for everyone to watch – ZCash and Tezos, with $1.3 billion and $2.7 billion market caps, respectively.

Both of these microcurrencies or "altcoins" are based on the blockchain, like Bitcoin, but they serve a different purpose.

Tezos, which is up around 76% in 2021, can be used for payments, but I think maybe the real genius of it is its ability to deploy "smart contracts" – two words I think we're going to be hearing a lot more of. To oversimplify it, smart contracts have the ability to automatically execute once the agreed-on conditions are met, without the need for expensive mediation, arbitration, or enforcement costs; you can see how disruptive that might be in the near future.

I also told folks to keep an eye on the "Bitcoin of privacy," ZCash. ZCash is a lot like Bitcoin, but much more anonymous. I think these days, when privacy is a scarce asset itself, the value of a coin that does transactions as publicly or as privately as you'd like is obvious.

ZCash, or ZEC, is up a little more than 78% in 2021, but like I've said, we're still in early innings on these microcurrencies.

These altcoins are just two I recently put on my Microcurrency Trader readers' radar recently, and their performance has been even better than Bitcoin's this year.

Great information, have been utilizing this data for some time to develop and coordinate our Crypto and Cannabis portfolio.

Thanks for sharing that. Crypto has already made a case that it is staying and hence they only good thing to do now is to find ways to make profits off it, and also how to safely transact your profits (using Bitcoinmix, hardware wallets, etc)