If you wanted two examples of "pandemic stocks" that rocketed during the worst of the coronavirus crisis, you sure don't have to look much further than Zoom Video Communications Inc. (NASDAQ: ZM) and Chewy Inc. (NYSE: CHWY) - two of the hottest stocks of the past year, thanks to the growth in working from home and pet ownership.

Of course, now that the pandemic is waning and recovery's taking hold, these companies have lost a little (or, you might say, a lot) of that luster; CHWY is down more than 33% from its all-time highs, while ZM is down 42%.

But I know one $16 company that crushed not one but both of these during the pandemic.

Not only that, but, unlike some others, its shareholders are still deep in the black. They've held onto their profits and are pocketing even more as we speak.

The stock I'm going to name in a second is comfortably in the market's current "sweet spot" that we've been talking about - the space between "pandemic stocks" and "recovery stocks." 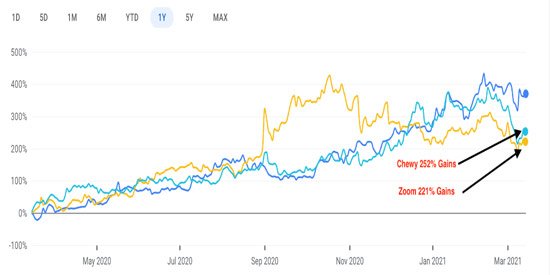 But do you see that other, dark blue line there? The one that's still way higher than the rest, that shows 370% gains?

That's the one I mean.

URGENT: This private pharma company is about to move three of its new cannabis-based drugs to the next phase of clinical testing; each of these drugs could be worth as much as $1 billion to the company, but they need a handful of new investors. Details here...

It is in the sweet spot, but that performance is down to the fact that this is a dynamite company in a sector that, frankly, was booming anyway, pandemic or no. And it should stay booming for the foreseeable future.

Revenue isn't going to slow down like it might with a lot of work-from-home companies; sales are likely to keep increasing, and at an accelerating pace, to boot. It's a market that was worth $17.5 billion in 2020, and it's projected to climb 135% to $41.3 billion by 2025 - and those are conservative estimates.

That means those 370% profits are really just the start. If these star performer shares had been in the tech or retail sectors, they would've been plastered all over every screen from FOX to CNBC and everywhere in between.

But the sad truth is they're in a sector that a lot of people have shut themselves off from.

For one, it's not possible to buy these shares with Robinhood, because they trade over the counter (OTC) - never mind that trading OTC shares can be done through just about every other brokerage out there.

What's worse, a lot of folks can't perceive that there's a definitive "winner" to back here - there's no Apple Inc. (NASDAQ: AAPL) or Amazon.com Inc. (NASDAQ: AMZN) style "big name" to pile into...

So a lot of people just don't. Despite the outrageous profits savvy investors are already banking.

Not Just a "Cannabis Stock," but an "Empire Stock"

(My friend and colleague, Don Yocham, first told you about this stock back in late December, 2020, and it's already delivered you more than 31% in profits if you've been following along. National Institute for Cannabis Investors subscribers have had the chance to bag significantly more. You can read more about NICI and everything subscribers get right here).

It's not hard to see why CuraLeaf is delivering big profits, or why there's so much more yet to come.

It's in an enviable position.

RELATED: Owning shares of an established cannabis "empire" is great, but if everything goes right, the profit potential in cannabis startups can be truly outrageous. This small firm is closing a funding round on March 31, and it may go public soon. Regular investors may have to move quickly...

See, over the next decade - perhaps much sooner - in the United States, walking into a dispensary to buy a pack of pre-rolled joints will be just as commonplace as it is right now to go into a liquor store and buy a six-pack of beer.

Curaleaf Chair Boris Jordan knows that, and he has been planning ahead to make sure his company is in the best position to make the most money as the United States is expected to become a $41.5 billion market by 2025.

Curaleaf wants to reach an astonishing 93% to 95% of U.S. households that don't currently consume it. To do that, it will eventually become just a processor and manufacturer of cannabis products. That will cut out the cost of grow operations, and it will also allow the company to focus more on its branding to stand out from the crowd.

"We're making the products much more mainstream for our customer base - we'll be no different than Coca-Cola or Frito-Lay," Johnson said in an interview with Forbes.

The company already has operations in 23 states with a total of 101 dispensaries, making it one of the largest multi-state operators (MSOs). That's a good start in reaching the 93% to 95% of U.S. households that aren't currently consuming cannabis.

In other words, this company stands every chance of becoming the first bona fide cannabis empire.

That's a ride you want to be there for. And as more states start to legalize, it's going to expand across the country even more - organically and through strategic acquisitions.

So just like Starbucks, McDonald's, or, as Jordan himself said, Frito-Lay and Coke, Curaleaf will be everywhere its potential customers will be.

That's why, as impressive as those 370% gains have been over the past year, that's just an early taste of what you can expect as a CURLF shareholder.

Next week, I'm going to bring our NICI subscribers our report about CuraLeaf's global expansion plans.

That's right: When I said "empire," I wasn't kidding around. Boris Jordan and CuraLeaf are looking far beyond the United States, with its "mere" $41 billion sales potential, for revenue growth.

You can learn how you can get that interview (along with all our other interviews with cannabis CEOs, financiers, and innovators) right here. You'll see everything you can get as a NICI subscriber and get access to our dossier on the three best cannabis investments you could make in 2021.