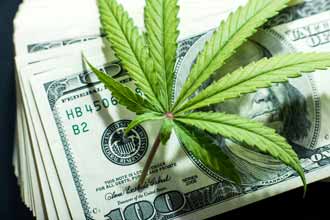 Federal decriminalization could bring triple-digit gains to the marijuana industry in the next year. And Curaleaf stock will be a key beneficiary.

A years-long push for marijuana continues at the state and local level, likely informing the federal decision-making we see today.

Of course, there is still some pushback. The North Dakota bill is more restrictive, by design, than the initiative activists are trying to get to the floor in 2022 - it does not allow home-growing of the marijuana plant.

This kind of in-fighting is likely to happen at the state level for a while, making for a constant ebb and flow in cannabis stocks.

What's happening federally, however, is going to have a far greater impact on the status of marijuana in the United States than anything else. It could push them sky-high for good.

Let's talk about this bill, and then why Curaleaf is poised to benefit from its passage...

This Law Will Legalize Marijuana Nationwide

The Marijuana Opportunity Reinvestment and Expungement (MORE) Act of 2020 passed the House in December.

It was at first blocked by key Senate members. But with a new Senate following the election cycle, it appears more likely to go through.

Lawmakers say the legislation is primarily geared toward "restorative justice" and "public health," tackling both the current criminalized status of marijuana and the medical potential of the plant.

It will free marijuana from being listed with heroine and LSD as a "Schedule I" drug. It will also help expunge prior marijuana convictions.

This bill will influence the way marijuana is seen around the country while still giving the states room to enforce their own positions on marijuana.

It has taken plenty of back-and-forth within Congress to get to this point. Now, however, the "missing ingredient" of Senate passage appears more likely than ever.

That's great news for the cannabis industry, but there's one marijuana stock that stands out above the rest.

And this bill could be the catalyst it's been waiting for...

Why Curaleaf Stock Is Set to Pop

Curaleaf Holdings Inc. (OTCMKTS: CURLF) is the largest U.S.-based cannabis firm. It hails from Massachusetts but operates in 23 states so far.

Currently, the company runs 96 retail dispensaries, 23 cultivation sites, and 30 processing plants. With control over the product from cultivation to in-store sale, Curaleaf has significant flexibility in how it operates.

Curaleaf has been setting up shop in states that are legalizing cannabis. With a full, federal legalization, it has an opportunity to expand even further.

It's already made smart front office moves to expand its portfolio. The company has made 14 acquisitions in just the last four years. This has added more than half of its dispensaries, cultivation sites, and processing locations.

As a result, Curaleaf is hard to beat when it comes to market exposure. The potential market for this company consists of over 190 million people. And there is still plenty of room to grow as pot is decriminalized nationwide.

The MORE Act could enable Curaleaf to ship its product across state lines. It will also give the company more access to banking and potential listing on major exchanges.

Moving from over-the-counter to the NYSE or Nasdaq could be huge for pot stocks. That's a likelihood for Curaleaf with this new law.