Bank stocks have tremendous tailwinds right now, and if you're looking to ride them higher, then Wells Fargo & Co. (NYSE: WFC) is the best of the bunch. 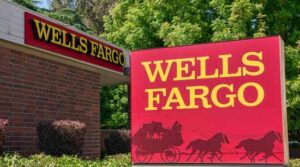 You see, bank stocks are finally hitting their stride, and the latest rally is going to carry them higher through the economic recovery.

When the pandemic hit last year, bank stocks took a terrible tumble. Unlike some other sectors of the stock market, once bank stocks fell, they stayed down.

There were fears that we would see widespread defaults on mortgages, credit cards, and auto loans as consumers struggled to make ends meet. Even more concerning was the possibility of widespread defaults in commercial real estate loans and other loans to businesses.

Even fiscal and monetary relief packages from the Fed and Congress did not help alleviate investors' concerns about bank stocks.

It wasn't until it was obvious that the vaccine is ending the crisis and the economy is going to come back that investors were comfortable buying bank stocks.

Comfortable is an understatement...

Investors have been ecstatic about buying back into the industry at relatively low valuations compared to the rest of the market.

Banks stocks took off and have rallied more than 70% in the past six months.

It will go higher from here.

Since the announcement of the availability of vaccines that will allow the world to get back to normal, banks have gotten more good news. Credit losses from the pandemic have been much lower than originally feared.

The Fed reviewed the stress test results of the nation's biggest banks and began allowing stock buybacks to resume. Most banks have been able to maintain and even increase their dividend payouts.

In the past few weeks, banks have gotten what may well be the biggest gift of all: Long-term interest rates have begun to move higher.

Traders have been anticipating better-than-expected economic growth after the U.S. Federal Reserve raised its 2021 GDP growth forecast to 6.5%.

In spite of the spike in longer-term rates, Fed Chair Jerome Powell has remained committed to keeping shorter rates low to continue to spur and support the U.S. economy.

The difference between the short-term rates that banks pay to borrow money from the Fed and the long-term rates they charge for loans is called the net interest margin. The higher that margin is, the more money banks make.

That's one reason why Wells Fargo is such an attractive play...

Why Wells Fargo Stock Is a Buy

While bank stocks have rallied, shares of Wells Fargo have lagged behind since the pandemic arrived. Wells Fargo is one of the few bank stocks that hasn't soared back to hit pre-pandemic levels and made new highs.

Wells Fargo is still struggling with the fallout from the cross-selling and accounting scandals it had a few years ago. It didn't help that even long-time Wells fan and huge shareholder Warren Buffett bailed on the stock.

Wells Fargo has been operating under an asset cap that forces the ban to stay below $1.9 trillion until it meets all of the requirement laid out by the Fed to remedy its risk management and governance mistakes.

That may not sound like a good reason to buy the stock, but it is. This is all changing in a hurry, giving you plenty of upside you won't find in bank stocks that have already popped.

The Fed has approved its plan to meet the requirements, and Wells is now in a position to move forward to execute the steps required for the cap to be lifted. Most analysts think the final two steps can be completed and the cap lifted this year.

Its middle market commercial banking franchise is one the best in the nation as well.

Wells Fargo has replaced the management team that made the mistakes that caused its current problems too. Current CEO Charlie Scharf has put the right people in place and is doing all the things needed to complete the turnaround and get the bank back into growth mode.

Wells Fargo is not as efficient as its competitors, and fixing this issue presents an opportunity for the bank to save more than $10 billion over the next couple of years.

It has been a rough few years for Wells Fargo.

The bank, and the stock, appears to be on the verge of completing the turnaround. Thanks to the successful turnaround and the boost bank stocks will get from better net interest margins and a high growth economy, Wells Fargo appears to be poised to be a leading bank stock once again.

If shares return to their pre-scandal high, the stock could see a near 75% pop from here. You won't find that level of growth in a bank with this stability.

When it comes to the 2021 stock market, politics won't matter, and neither will the COVID-19 pandemic.