The five-year outlook for Tesla Inc. (NASDAQ: TSLA) is bullish, and the reason might surprise you. 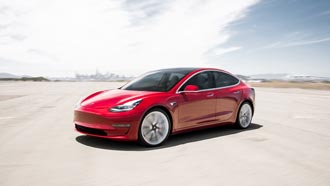 Yes, the Tesla cars are great, the branding is great, and the company has managed to infiltrate foreign markets with ease. But its greatest advantage in the EV market is yet to be tapped.

Be warned: It just might get a little worse before it gets better.

Though Tesla has done well flexing its product, we're looking at a sea of legacy car companies trying to get in on the action. Ford Motor Co. (NYSE: F), General Motors Co. (NYSE: GM), Toyota Motor Corp. (NYSE: TM), Fiat-Chrysler Automobiles (NYSE: FCAU), and many other companies abroad will release EV models over the next five years.

That means Tesla will need to innovate like never before if it wants to compete.

The good news is that it can, though it must act quickly to maintain global dominance.

Here's what is happening with Tesla today, and what it means for our Tesla stock prediction for 2025.

A few things need to happen for Tesla over the next few years if it wants to get a leg-up.

That is, of course, the ultimate Cinderella scenario. But we agree with it - here's why.

The bull case requires Tesla to outdo its competition in the autonomous vehicle space. The company would have to scale internationally. It would also need to expand its portfolio and vertical integration - that is, expand its solar holdings and insurance offerings.

Hopefully, Tesla will also be mining its own lithium by then.

It's a heavy order, sure. But if Tesla does not accomplish these things, the bearish growth target from Ark is $1,500. That's still a 140% target; however, it will have less of a compounding effect if Tesla does not aggressively expand in the above ways.

The good news is that the pieces are all in play for this.

Tesla Will Get an Insurance Program by 2025

Ark predicts an increase in Tesla's insurance program over the next five years.

The company introduced the product as recently as 2019. For now, it's only available in California, but it could roll out in more states quite soon.

This borders on revolutionary.

You see, car insurance companies are starting to offer customers tools that can more closely monitor their driving in real time.

Geico, for example, offers an app called DriveEasy to track driving tendencies. It encourages more careful driving with the hope of cheaper insurance.

Since Tesla cars have all the data collection tools built in, it can track even more, with far greater accuracy.

Ark says that if Tesla underwrites more of its own insurance and uses the real-time data collected by its cars to assess risk, it could achieve a lower customer acquisition cost and hit margins as high as 40%.

This would be huge for Tesla, and it would have to be crazy not to jump on it.

But that is just one area where Tesla could potentially expand.

Another opportunity for Tesla to gain ground is in the ride-hailing industry.

If Tesla were to dabble in ride-hailing, it could achieve a lower cost structure than companies like Uber Technologies Inc. (NASDAQ: UBER) and Lyft Inc. (NASDAQ: LYFT). This would increase the company's operating profit by about $20 billion by 2025.

A human-driven ride-hail network would lay the foundation for an autonomous one. It would also hedge any potential failure in Tesla's autonomous cars - say, in China, where it's having issues.

The Ark model gives Tesla a 50% chance of offering fully autonomous cars by 2025. The report says that if 60% of its autonomous vehicles were "robo-taxis," Tesla would have an extra $160 billion EBITDA by 2025.

New Extra Income Hack: This could be your shot to collect $1,000 to $5,000 a week - regardless of how volatile the markets are. WATCH NOW.

There may still be a period of wide fluctuation in the stock price meanwhile.

That's because, in addition to growing competition, Tesla faces a major problem China, the country it hopes will be its largest market over the next decade.

This is possibly the biggest thing standing in between Tesla and hyperbolic growth in the next decade.

We already know Tesla vehicles collect a lot of data with their cameras and other sensors. But the company needs to make a case for Chinese leaders that its cars will "never" share sensitive Chinese data with the United States.

This is probably Tesla's greatest obstacle to 370% growth by 2025. And it's not merely a geopolitical concern.

China is also having trouble with the Tesla product in general. The national security element is just icing on the cake.

Tesla has had several product recalls amid its Chinese tenure. The most recent involved 36,000 vehicles with a faulty touch screen. Before that, customers complained about a faulty front and rear suspension, resulting in over 40,000 recalls.

To combat negative publicity, CEO Elon Musk wants to make the case that his company is fully on board with China's carbon emission goals - to be carbon-neutral by 2060 - and privacy concerns.

If national security pushes China to buy domestic, Tesla is finished there.

We've already told you about how Nio is gaining ground in China. It stands to usurp Tesla's position as one of China's most popular car makers - it could even potentially seize the global throne.

Nio recently unveiled its cost-cutting Battery-as-a-Service business model, and its cars are rumored to be more powerful than Tesla's - they just don't have the "Elon Musk, Technoking" branding behind it.

Tesla has proven the naysayers wrong before.

If by 2025 it can improve those production bottlenecks, along with taking advantage of new sectors, it should be able to hit the $3,000 mark.