Get your wallets ready - this week marks the start of April, the stock market's most lucrative month of the year.

Over the past 20 years, the year's fourth month has returned 2.4% on average. That's double the returns of both October and November, which sit in second and third place with 1.17% and 1.08% returns, respectively.

But that's not all April's good for.

See, next month doesn't only boast the highest ROI of the year. The SPDR S&P 500 ETF Trust (NYSEArca: SPY) has also finished April in positive territory 79% of the time over almost 20 years. That makes it the second most frequent bullish month, trailing only behind the election month of November. 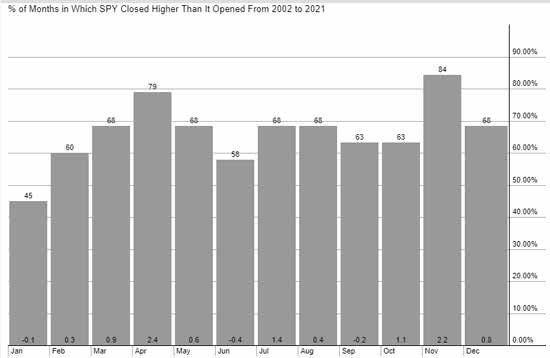 Typically, that means investors are eager to buy almost anything as April begins. This year, things are different.

There's been a shift in the market.

Usually, money pours into large-cap tech. But the Nasdaq tumbled 7% the first week of March. After spending the majority of the month in negative territory, it seems the FAANG names have lost their bite.

On top of that, interest rates are rising, despite the Fed's commitment to keeping them low. Inflation is becoming a real threat to businesses across the country.

But the fact is this: The money isn't leaving the market. It's just moving somewhere else.

And when money is moving, stocks go up.

That's why this year, you don't want to dive headfirst into the S&P 500 or the Dow to profit on the April rally. With a play like that, you're looking at a modest and insignificant 2% return, max.

And you definitely don't want to drop all your money into the Nasdaq.

The strongest play you can make this April is to follow the money migration - and we know exactly where it's going.

You could be looking at money-doubling returns all month long. Forget FAANG - these three groups will be April's biggest winners...

Three Sectors to Buy Before the April Rally

The retail sector has multiple tailwinds going for it right now.

First off, seasonality. April isn't just the best month for stocks in general. Retail stocks in particular have also turned in their best performance of the year during the spring month, the sector trading alongside the S&P 500, ending the month in positive territory 79% of the time over the last 16 years.

Secondly, retail is a huge part of what I like to call "the reopening trade."

After being forced to stay away from retail stores for the past year, shoppers are eager to head back to the mall as vaccinations soar. Spring is already a big time for retailers - and this year, we're seeing the traditional seasonality combine with the urge to get back out into stores.

Inventory is low, and buyers keep buying - and the homebuilders are swinging hammers yet again.

Inflation and increased demand have raised the cost of materials like wood, concrete, and wiring. And the builders are transferring those costs to buyers, resulting in even higher real estate prices...

And, in turn, higher stock prices.

The SPDR S&P Homebuilders ETF (NYSEArca: XHB), for example, is hovering around an all-time high as I type.

Many investors are scared of inflation. But homebuilding stocks are skyrocketing fast, as money is flowing into the sector ahead of what's historically been a strong April performance.

But I'm not just talking about airlines and cruise ships. There's another group of travel stocks that represents the "first touch" that most people will have with the travel industry as they get ready to take their suitcases out of storage - and it's a sector that will shoot higher before traditional travel stocks get the chance.

I'm talking about tech names like Uber Technologies Inc. (NYSE: UBER), Airbnb Inc. (NASDAQ: ABNB), and Trip Advisor Inc. (NASDAQ: TRIP). This sector is already rallying back to its February 2020 highs... and there's even more room to run from there, especially as April stakes its claim.

Now you know these three sectors have some of the market's top moneymaking potential this month, but only one question remains...

What are the best ways to play them?

Well, it's simple. And on Wednesday, March 31, at 4 p.m., I'll tell you the best stocks from each of these sectors, point-blank...

Plus, I'll give you not one, not two, but three specific trade recommendations - one from each of these sectors.

The second the closing bell rings on Wednesday, tune into my exclusive livestream: Your April Trading Playbook.

I'll see you then! Get your portfolio ready for April's consistent windfalls...