You've probably heard Nio Inc. (NYSE: NIO) is the "Tesla of China." But that might not be giving Nio enough credit. Once you see our Nio stock price prediction for 2025, you'll know why.

While Tesla came out swinging six straight months of profitability and new factories in China and Germany, there's a chance this growth was too much, too soon. 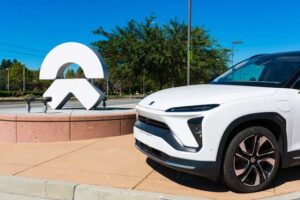 Nio, while sharing many attributes with Tesla, is almost a perfect contrast. It's more equipped to handle an uncertain future, building a reliable foundation for its business rather than building hype around its brand.

You see, the electric vehicle industry is in for a shake-up. Most first-movers are in for a rude awakening as new EV makers spring up around the world - Ford Motor Co. (NYSE: F), Toyota Motor Corp. (NYSE: TM) and more.

These all stand to chip away at Tesla's market share. In fact, that might have already begun to happen.

Nio is under threat from this as well. But as you will see, the company may be better prepared for it than any other.

That's why our Nio stock price prediction for 2025 has its biggest gains coming in the more distant future.

Don't get us wrong - Tesla has the potential to outsmart legacy carmakers as well. Nio simply might stand a better chance.

Our Nio Stock Price Prediction for 2025

In the next five years, electric vehicles are going to get a big boost from the green energy movement. Policies worldwide are shifting in that direction - for example, California wants to have gas-powered vehicles completely phased out by 2050. China also keeps extending its subsidies for EVs.

Within the next five years, however, we're going to see improvements to batteries, more charging stations spread across the globe, and new EV producers spring up in the process. BloombergNEF predicts that EVs will make up 10% of passenger car sales in 2025, and that number will grow to 58% by 2050.

As part of what will likely be the world's largest economy in 2050, Nio is in position to control that market. It's leading the charge when it comes to battery quality, how they are used and sold.

Nio's unique battery-as-a-service (BaaS) model will form a consistent, reliable revenue stream for the company. But Nio is also well diversified. It controls a large portion of its own supply chain. And it will likely expand into global territory over the next decade.

For these reasons and more, Nio stock likely has its biggest growth spurt coming in the next decade.

Right now, the stock is on a dip at $37, which is close to half its record high.

But between now and five years from now, Nio likely will increase profitability, production capacity, and market share in its China home. This would have to at least double the stock's all-time high of $61.

Here is why we can expect such a bullish outlook from this Chinese EV company and why now might be a good time to get your hands on the stock.

Why the Nio Stock Price Is Going Up

The biggest blockade to Nio's thriving at home is Tesla. But it looks like Nio is gaining ground against the American auto maker in Chinese vehicle deliveries.

Tesla opened its "Giga Shanghai" factory in March 2020, where it would produce its Model 3 and Model Y. Everyone thought this would cement Tesla's control of worldwide EVs. But as is often the case, things are more than what they seem.

Yes, Tesla has put up great delivery numbers in China and abroad. According to CNBC, Tesla's deliveries in China were 499,500 vehicles, or almost a half million. Its main Chinese competitor, Nio, delivered just 36,721.

However, the devil is always in the details. Tesla's deliveries grew a solid 36%. Nio's more than doubled - a tremendous 111% growth.

It turns out, despite Tesla having a fanbase in China, most Chinese people simply like buying China-made products.

For this reason, Nio founder William Li predicts production capacity will grow to 150,000 vehicles annually, and then double to 300,000 in 2022.

In addition to the growing numbers, an even spicier story is brewing to push Nio ahead in the Chinese EV market.

Forget AT&T, T-Mobile, or Verizon. The real returns in 2021 and beyond will come from this backdoor 5G market.

Forget AT&T, T-Mobile, or Verizon. The real returns in 2021 and beyond will come from this backdoor 5G market.

Along with Nio's grassroots popularity has arisen a preference for domestic auto manufacturers by the Chinese government.

More specifically, Tesla has been under suspicion for its data collection ability - cameras and other sensors that are always on.

Amid current U.S.-China relations, any U.S. business in China has a tough hurdle to clear (the inverse is true as well, of course). Add suspected espionage to that equation, and your days working in China could be numbered.

So, not only is Nio delivering more cars than Tesla and raising its production capacity, but China has begun to look at Tesla with suspicion for simply being an American tech company.

Tesla is doing everything it can to scrub this image, but Elon Musk's pleading, "I love China very much" can only take it so far.

China is Tesla's biggest market. And as China has the world's largest population, it could be the biggest EV market for Nio's taking.

Of course, this all would not be possible if Nio's product was not top-notch.

Nio's battery-as-a-service model is going to be a profit machine. Not only does it reduce the cost of buying an EV, but the battery-swapping mode (BSM) appears to also be favored by the Chinese government over the charging mode.

That is, China's EV subsidy only applies to EVs under a certain price threshold, while any BSM car can be subsidized. This may have something to do with the fact that charging is less efficient than swapping in some ways. You get 30 charging times and must share space with gas vehicles.

Swapping a battery can take a matter of minutes. It is more expensive, which is why Tesla has avoided doing it. But Nio has found a workaround by enabling consumers to subscribe to its batteries.

Consumers can save $10,000 on the car purchase, then subscribe to battery renewal for $142 per month.

Not only does this bring a constant revenue stream to Nio, but Nio can also learn more about its customers' battery use and future need to perfect the model in the future.

Nio could also potentially scale greater than Tesla if its battery as a services system is a success. In fact, it's been rumored that the company might come to the United States.

An analyst from Deutsche Financial recently found a U.S. job posting from Nio on LinkedIn.

Of course, this is a very small tidbit, but the potential is there. And if that is true, it will be huge for Nio stock.

Moreover, if it happens soon, it will make it more difficult for traditional U.S. auto makers to catch up to the EV market as they battle both Tesla and Nio for exposure.

Here's how it would likely go:

Nio is one of Tesla's biggest threats in China. If Tesla's China growth is stymied, Nio will have much smoother sailing in its home country.

This would catalyze even further success abroad, with the world's largest economy as its main customer base.

The Nio stock price was been cut in half in early 2021 due to a chip shortage. However, once the industry regains its footing, this company could take China and then the world.

That is going to send its stock price through the roof.