Crude oil is coming into a period of seasonal strength right now - just like most of the stock market.

Even in a normal year, U.S. refineries would be getting ready for the summer driving season, which calls for a different, more expensive blend of gasoline that's in higher demand.

But this year, demand is going to be off the charts.

Authorities are really stepping up their coronavirus vaccination game. I saw someone getting vaccinated at a Home Depot garden center the other day, and restrictions are easing all over. That means a lot of the pent-up demand we've seen for travel and oil products is going to go through the roof. In fact, it already is.

And on top of all this, you've got the MV Ever Given. I wouldn't have believed it if I hadn't seen it!

TRADING GUIDE: You can learn how to start using artificial intelligence to predict, with up to 95% historical accuracy, the movement of stocks. Claim your copy of the guide now...

When the Empire State Building-sized cargo ship spent most of last week stuck across the entire Suez Canal, it held up around 12% of daily global trade - $400 million an hour - including 1 million barrels of oil. Ever Given was freed earlier this week and normal heavy canal traffic is finally humming along, but the delay was enough to create some opportunities that'll take some time to play out.

With conditions like these, making some fast money on crude is going to be like shooting fish in a barrel. Here's how to do it...

Crude Oil Hasn't Been This Bullish in Years

Let's take a look at this screen grab of my 100-day United States Oil Fund LP (NYSEArca: USO) chart. USO is an "optionable" exchange-traded fund (ETF) that tracks the price of West Texas Intermediate (WTI) Light Sweet Crude oil. It's not necessarily the best way to play oil right now - I'll show you that in a second - but it is the easiest way to track price and liquidity. 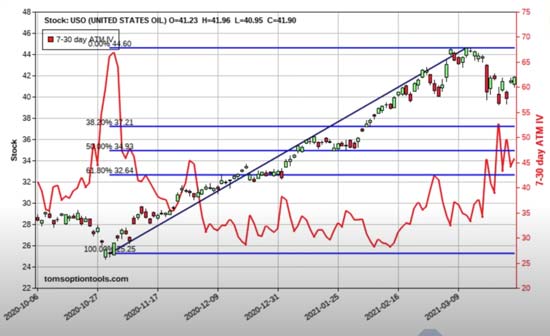 The chart tells the story of crude oil recovering from its October 2020 lows - not as bad as last April, when it went negative, but still really low. It starts to break out again in late December, when the first vaccines hit the street and investors started looking forward to the kinds of increased economic activity that ending the pandemic could bring.

You can see crude move almost steadily upward until people started worrying about inflation, which is really counterintuitive because economic recovery was really driving those inflation concerns.

Interestingly, since early February, USO has been above $55, and even when it has dipped, it's never even come close to its primary, 38% Fibonacci retracement level.

Even more interestingly, since the Ever Given and all that crude oil got stuck in and around the Suez, you can see oil dip lower at first as traders, who I guess were just as dumbstruck as everyone else that a ship could get stuck like that, didn't know quite what to make of it. USO headed quickly higher as traders weighed the possibility that oil supply "could" be tight, but then it moved sharply lower as it dawned on them that plenty of oil was still being pumped.

So now that the ship drama is over, we're free to start trading what's historically been one of the strongest, most profitable quarters for not just crude oil, but oil stocks, as well.

I recently named 10 of the best oil stocks to trade for my subscribers - you can learn how to subscribe and get a $1 trading e-book here - but I've got one trade I can share with everyone today.

Take Down 100% or Better Profits on This Oil Stock

One I love right now, both from a fundamental and technical perspective, is Cabot Oil & Gas Corp. (NYSE: COG). I think you could buy the stock outright today and quickly make at least 15% on it.

But of course, if you trade COG, you stand to make more - a lot more.

That's aggressive, for sure, but I think the smartest move here might be creating a COG call spread, where you'd buy the same 100 COG July 16 $19 calls for $170, but at the same time sell 100 COG July 16 2021 $21 calls and take $85 in premium into your account. That cuts your cost - your risk, really - in half, but your profit potential still looks good, too: If COG is trading at $21 by mid-July, you could better than double your money.

I've been a professional trading expert for more than 25 years now, and I think it's possible crude oil could be moving into one of its most profitable seasonal patterns ever. And with the right trading strategies, you could put a whole series of "Payday Appointments" on your calendar. With the right stakes and a couple of these paydays under your belt, you could potentially be collecting big profits. Let me show you a little more about that here...

The trade on COG buy the july 21 19 C and sell the july 21 21C gives you a debit not a credit. how do you get credit please explain.
Thanks.

Thank you for reaching out, and you are correct buying the $19 call listed here in addition to selling the $21 call would give you a debit balance.

When trading under this recommendation, there would be no way to achieve a credit balance at this time, which would in fact be besides the point Tom is making.

Above, Tom is anticipating that COG stock is likely to move up, and in executing this call spread you can capitalize on the upside while cutting your initial cost, and capping your loss should the stock move out of your favor.

And if COG does in fact move as Tom expects, trading on a credit would only result in a loss, while following his recommendation should result in a low-risk return.

I hope this answer is helpful – should you require any further guidance, I would advise reaching out to your brokerage, or to our customer service department at 1 (888) 384-8339.