Ah, the "forward lateral" - one of the most-failed football plays there is out there.

It's a trick play, a desperate move. Whenever you see a quarterback try and throw the football sideways to a teammate across the field, you can be sure that team is way behind in a must-win game.

That's basically what the market is trying right now, a forward lateral pass. Investors are bobbing laterally from sector to sector, searching for stocks to buy ahead of a traditional summer slowdown that could be made worse by worries about inflation.

This constant flip-flopping between sectors says a lot about investor expectations. It's got me moving on an exchange-traded fund (ETF) that should offer double-digit upside while the broader market slows way down...

These Sectors Are Poison Right Now

The high-flying valuations of Tesla Inc. (NASDAQ: TSLA), Facebook Inc. (NASDAQ: FB), Apple Inc. (NASDAQ: AAPL), and Alphabet Inc.'s (NASDAQ: GOOG) Google have generated some worrisome vibes for investors over the past week or so.

We're currently seeing a large, powerful exodus out of the technology sector, specifically the large- and "mega"-cap stocks. The NASDAQ 100 was trying for a rally on Thursday, but it's got a lot of lost ground to make up; the Invesco QQQ Trust (NASDAQ: QQQ) ETF that tracks the tech-heavy index is down nearly 3% for the month.

A lot of this is down to earnings season, or should I say, earnings season's end. The fact that the earnings reports were mostly good has made them more of a liability, because, over this current quarter, there are some concerns that earnings growth might not be as strong.

This is definitely a "buy the dip" opportunity to load up on stocks you like, but as a pure profit play, it's dead for the foreseeable future.

We're also seeing major outflows in the biotechnology sector, too, as tracked by the SPDR S&P Biotech ETF (NYSEArca: XBI). That's down around 8.6% since April 28. It's fallen into a technical pattern bullish traders dread - lower highs and lower lows. The sector is badly underperforming the market. This is putting the entire biotech sector in a vulnerable position.

This downturn started when investors started to move to lock in their profits and sell at highs - "sell the peak," which is kind of like the opposite of "buy the dip." Over the last five years, biotech has been producing pharmaceuticals for every ailment under the sun. But now that COVID-19 vaccines are in arms from coast to coast, we haven't seen any headline drugs hitting the market, leading to an empty product pipeline. That, and diminishing patent protection right now has investors running from this crowded sector.

I'm forecasting that the SPDR S&P Biotech ETF (NYSE: XBI) shares will slip into a bear market trend later this year as the shares fall below their 20-month moving average at $110. 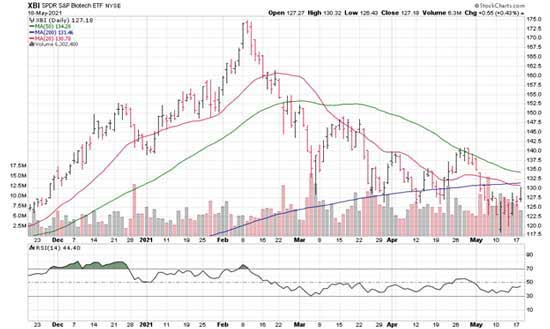 So that's where investors are running from... Now let's look at where they're going - it's where the upside is right now.

The smart money is headed right for the retail sector, and I expect the SDPR S&P Retail ETF (NYSEArca: XRT) to show incredible strength for the next few weeks at least.

XRT shares have seen a constant flow of assets moving into the sector over the last three months, but that's just a trickle compared to what's coming around the corner as we head into June. Smart investors are preparing for what is going to be a robust recovery among these stocks, but there's a catch - an interesting one, at that.

Some, but by no means all, of the largest names in the XRT are also some of the retail companies that are performing at a "discount" to the sector.

Take Walmart Inc. (NYSE: WMT), for example. Shares of WMT are down close to 3% year to date, despite the XRT shares trading 45% higher for the same period. These examples are few and far between, but they're present. Don't let them scare you away from the XRT shares, because for every Walmart, there is a Dillard's Inc. (NYSE: DDS) that is trading more than 389% higher for the past year.

The reopening is just starting to get into full swing in the retail sector, making it an odds-on favorite to outperform the large-cap technology stocks.

Trim back your tech and biotech exposure for the time being - by all means, keep an eye out for "buy the dip" opportunities on tech names you want to own.

Whatever you do, add the XRT ETF to your portfolio here at $90. My six-month price target on these shares is a cool $140, which would be more than 55% higher than today's prices. That's what getting into a good position ahead of the crowd can do for you.

This mass movement of investors and, well, their money, is creating all kinds of potentially lucrative volatility "surges" in the market. After all, these new investors have been seen to put $11 million a second up for grabs; that kind of money and volatility definitely rocks the boat.

My friend and Profit Strategies Podcast co-host, Tom Gentile, saw these surges and decided to try a little backtesting on them. He found that the surges created insanely lucrative opportunities. Over the backtesting period, this system averaged a 35% return in just eight days... but some of the biggest wins included 1,000% in three days, 2,500% in 16 days, and even 3,800% in six days. You've got to check out his "Surge Strike" research and see it for yourself - click here.