The world's biggest economies, like the United States, China, India, and the European Union, have put increasingly tough emissions standards on vehicles - one of the largest sources of carbon emissions.

European regulators alleged the companies colluded for more than five years to avoid competing to advance cleaner emissions technology in diesel engines. The EU regulation sets minimum standards for diesel emissions, in expectation that automakers would compete with one another to lower emissions.

Instead, the car manufacturers worked together to stifle competition - their lawyers admitted as much and agreed to settle.

Now, many of these companies have been fined before, for things like price-fixing. But this is the first time ever that the EU has dropped the hammer over technology, and it sets a precedent for legacy automakers across the globe; they should be worried.

It's a new ballgame out there, all over the world.

The world's electric vehicle (EV) makers, and their stocks, have a huge advantage in this game, particularly this one...

Everything Is Changing for Carmakers

Back in February, some research out of Morgan Stanley caught my eye. The message and takeaway were pretty earth-shaking, but I'm not sure how many other eyes it caught because the note was more or less buried on the internet.

A Morgan Stanley auto industry analyst wrote, "We believe the market may be ascribing zero (or even negative) value for internal combustion engine-derived revenues at GM and Ford." Let that sink in for a second: Traditional engines, gas-powered cars, might very well be a liability - a drag on automakers' balance sheets and stock prices. The analysis bluntly said that gasoline engines could very well be a money-losing idea by 2030.

The big American automakers, unlike the Germans, apparently, are embracing EVs and the technology that comes along with them. General Motors Co. (NYSE: GM) has even committed to stop selling tailpipe-emitting vehicles by 2035. Ford Motor Co. (NYSE: F) hasn't gone quite that far, but it's taken some bold, definitive steps toward EV technology.

Investors who recognize a huge profit opportunity when they see it have rewarded these companies for their forward thinking on EVs; Ford stock is up more than 66% year to date, and GM is up 44%.

And of course, I've made some recommendations there, too - there's still room in a lot of portfolios for legacy carmakers who've committed to making the transition to electric.

But I think the profits from "native" EV makers could be even better, and that's where today's recommendation, NIO Inc. ADR (NYSE: NIO), comes in.

Why Right Now Is the Time to Move on NIO

NIO is one of China's biggest EV makers right now, and it's a major player in the autonomous vehicle (AV) race, too.

The stock is having a "buyable moment."

Lots of U.S.-listed Chinese stocks have sold off recently because of investor concerns over a supposed Beijing-led "crackdown" on Chinese companies trading on the big American exchanges, but here's the thing: Virtually nothing has happened since word of the so-called "crackdown" broke more than a week ago. Seems the Chinese government's bark is worse than its bite.

China has launched "cybersecurity reviews" of data-centric firms listing in New York, but that's about it - and besides, NIO makes electric cars, not apps.

NIO shares have actually sold off 5% or so over the past two days, but they're down less than $1 for the month, just touching on their 50- and 200-day moving averages. The stock actually went through a Death Cross last month, but it's begun recovering. 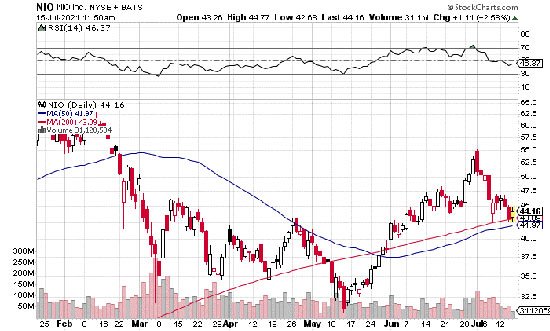 At the company's recent "Power Day mini-roadshow," the company announced plans to accelerate its battery swap service, whereby it swaps customers' discharged EV batteries for fresh ones. Right now, around 30% of its customers live within two miles of one of NIO's "Swap Stations." The company wants to bump that number up to 90% by 2025.

The EV market in China is growing more quickly than the American market; China is home to more than 44% of all EVs in the world, and sales are growing at 36% a year, which suggests a big, long-term boost to the company's bottom lines. NIO has plans to start selling EVs outside of China, with the most likely target being the European Union.

NIO is only one must-own stock in the new, red-hot EV space. This sector deserves every investor's attention.

There's another company - trading for around $2 right now - that's risen tenfold (1,147%) over the past year, but even bigger potential gains could be up ahead.

This small stock is looking to IPO on a major exchange, which means that 1,147% gain could now be mirrored over the next year or so. Here's what you need to know...