The electric vehicle sector has long since passed the tipping point from a specialist niche to... massive mainstream cash machine.

But, and this amazes me every time I hear it, the EV revolution wouldn't be possible at all without batteries. You can't drive 'em, they're not glamorous or cool-looking like a Tesla Model S, but they're absolutely critical to the continued growth of the sector.

That makes EV battery stocks essential for investors looking to squeeze every penny out of this unstoppable global phenomenon.

I've got two battery stocks on my screen right now; they're looking good from a technical perspective, so get your order in when the market opens the day after tomorrow...

These Are EV "Pick and Shovel" Plays

There's a lot of interplay between the EV battery segment and clean energy, and it's not hard to see why; there's a lot of technology in common there. In fact, the two stocks I'm about to recommend would work just as nicely for a clean energy portfolio.

A great deal of that technology is dependent on lithium, a strategic mineral that's going to be in increasingly higher demand because of its battery applications. Lithium batteries have actually been with us for around 30 years or so, and the concept was first floated back in the 1970s, but as you might guess, demand has gone parabolic over the past six years to the point where Statista forecasts global lithium demand will top 378,000 U.S. tons by 2030.

In other words, lots of lithium needs to come out of the ground between now and then. Most of the world's supply comes from Bolivia and China, but it's actually a fairly common mineral; investments in mining new sources and new processing capacity should help do the trick in meeting that demand.

Hence the Standard Lithium Ltd. (NYSE: SLI) recommendation this week. This company is working right here in the United States, in a region mining geologists call the "Arkansas Smackover." Much like an "oilman" will talk about the Marcellus Shale or the Permian Basin, the Arkansas Smackover is a massive porous limestone formation in south central Arkansas - fertile ground for extracting and processing lithium. (Coincidentally, the Smackover has oil reserves, too.) Standard's 150,000-acre Lanxess Project is the largest lithium brine production and processing facility on the entire continent. Standard thinks its project could ultimately be good for 4.4 million U.S. tons of lithium production. 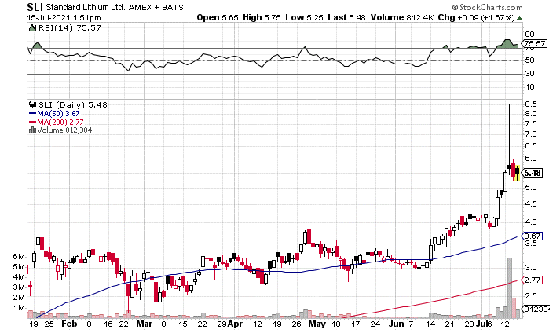 The stock recently started trading on the American Stock Exchange under the ticker SLI, which makes it a too-good-to-pass-up target for big institutional investors who might've given the company a pass when it was listed on the pink sheets.

And you can add some additional firepower to your battery holdings with the Global X Lithium & Battery Tech ETF (NYSE: LIT), which gets you instant exposure to 37 of the world's best battery and lithium mining stocks. 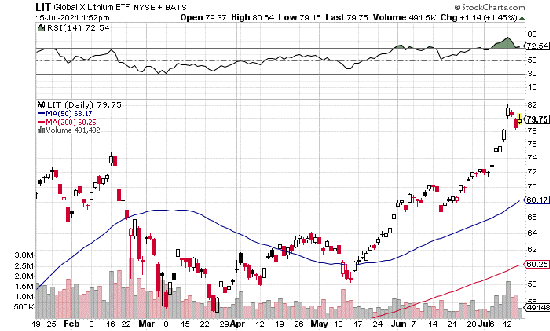 The wisdom of owning broad exposure to lithium during a historic lithium bull market is obvious, but this stock in particular is well-positioned for profits ahead.

Astute observers will note the shares appear to be in overbought territory as the relative strength index (RSI) goes, but given that it's more than $10 above its 50-day moving average and nearly $20 above its 200-day, it's likely the trend - the uptrend - will continue for the foreseeable future. If that turns out not to be the case, though, this is definitely one to add to on dips.

It's tough to overstate the profit potential coming out of the EV revolution. I recently got a peek at a $2 EV stock that's come further than 1,100% over the past year. Incredibly, there could be more upside potential ahead; this firm is currently looking to go public, and if that happens, next year's performance could possibly mirror last year's incredible run. You've got to get a look at the details - they're right here.

Good tip but trading only.