The stock market finally remembered that owning stocks can be risky.

After Friday's sell-off, the carnage continued on Monday as the Dow plunged more than 900 points at one point during the day. The biggest losers included commodity and financial stocks expected to benefit from inflation and rising interest rates.

Stocks fell by around 2% yesterday. A drop of 10% or more from recent highs would mean a market correction, and that's a possibility that investors need to take seriously right now. 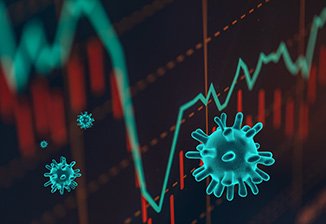 Fear of another round of COVID-19 related slowdowns hitting the economy was one of the primary reasons for the steep sell-off. Cases, hospitalizations, and deaths related to COVID-19 are rising again in the United States, and that has spooked traders into selling the reopening and inflation at a furious pace the past few days.

New cases in the United States surged by more than 70% last week, while other parts of the world are seeing some of their worst numbers yet.

That also hit the oil market.

Oil stocks were also down sharply as U.S. crude futures tumbled 7.5% to $66.42. Traders fear that new travel restrictions will be put in place, and that will hurt oil demand. Oil has been weak over the last week as many traders were unwinding bullish positions established to take advantage of the global reopening of the economy

It didn't help that OPEC and its allies, including our good friends in Russia, have decided to ease production constraints that were helping keep prices up.

Now that you know why stocks are down this week, let's take a look at a market prediction of what could happen next.

We'll show you three numbers to watch to tell if stocks find their feet or if a market correction is in the works.

And we'll show you what to do about it...

What to Do About a Market Correction

If the COVID-19 variant continues to grow, we could see the current move to get people back in the office by many major employers come to an end.

If the states and larger cities go back to lockdowns of the service industries, we could see unemployment claims reverse direction and begin climbing once again.

Treasury yields continued to rise as the bond market is clearly not seeing lasting inflation ahead. In fact, it is starting to trade like bonds are beginning to reflect the possibility of another round of economic slowdown and deflation.

The 10-year bond yield dropped on Monday to just 1.19% as bond prices staged a strong rally.

The level of aggressive speculation has been growing in the stock market for months now. As a result, we have seen a constant flow of initial public offerings by companies of dubious quality along with the flood of SPAC mergers from earlier this year.

Meme stocks have redefined the concept of rampant speculation over the last few months too.

Geopolitics helped fuel the Monday sell-off as well. The United States, along with the United Kingdom, Australia, New Zealand, and Canada, have accused China of opening a new form of cyber warfare with several hacks around the world of major corporations. The United States also confirmed Microsoft Corp.'s (NASDAQ: MSFT) earlier accusation that China was behind the massive hack of its e-mail program.

Anything that increases tension between the West and China is potentially bad for the stock market.

The next technical support level for the S&P 500 is around 4,327. That's at the 20-day moving average. If the market cannot hold that level, the next support point is near 4,239, which is the 50-day moving average and the area where the last pullback ended.

Should we fall all the way back to the 200-day moving average, currently at 3,890, it would be about an 11% decline from the highs hit just a few days ago. That would make this an official market correction and would also likely bring in heavy selling from trend followers that could drive prices even lower.

This week, we will see earnings from most major airlines, and dozens of regional and community banks, two of the groups hit the hardest on Monday. What the CEOs of those companies have to say will give traders and investors alike a better idea of what may lay ahead for the continued reopening of the U.S. economy.

Those banks could be an opportunity for investors too.

Banks, in particular, could be ripe for bargain shopping. Many quality regional banks are now trading at single-digit P/E ratios. Unless we get a full halt to the U.S. economy that throws commercial real estate markets into further turmoil, banks appear to be substantially undervalued at current prices. Any additional selling would present a buying opportunity.

We would resist the urge to chase commodity names as most of them have already had a spectacular run and are selling off from extended price levels.

And now is also a great time to jettison any bad stocks in your portfolio, like these...