Jeff Bezos and Amazon.com Inc. (NASDAQ: AMZN) have been taking up a lot of news bandwidth lately.

First, on July 5, he officially stepped aside as CEO of Amazon, the $1.8 trillion e-commerce giant he founded in 1994. Two weeks later, he blasted off to the edge of space in his own Blue Origin rocket with a hand-selected crew of pals.

Around 10 days after that, Amazon announced it had missed revenue estimates, and the market was further shocked when the tech giant called for considerably slower revenue growth of just 10% to 16% in the third quarter.

And if that wasn't bad enough, a recent story in The Wall Street Journal profiled a group of companies vying to unseat the King of E-commerce.

Once again, though, I thought the mainstream media came up short. It completely ignored the original Amazon challenger that's been around since 1995 - a year after Amazon was founded.

Trading at less than 2% of its more famous competitor's price, this under-the-radar stock has beaten Amazon's return this year more than 5X over.

And looking ahead, the returns promise to be even better...

The Opportunistic Rise of the "Anti-Amazon"

One of the featured companies from The Journal article, ShopIN.nyc, works with local New York City-based companies to pool their products into joint warehouses.

ShopIN.nyc is a direct counterweight to Amazon that focuses on bringing together local businesses. The idea is that together, they can compete with Amazon's all-encompassing retail platform and keep the proceeds within their own communities rather than seeing them go to a single global monolith.

Their spirit of antagonism toward Amazon is less than subtle in their social media campaigns, which boast taglines like "Shop Boroughs, Not Bezo$" and "An 'everything store' that delivers faster than Amazon."

Though they are not publicly traded, they're far from the only e-commerce player capitalizing on Amazon's bad press and recent earnings stumbles.

Alphabet Inc. (NASDAQ: GOOG)'s Google is on the same track, working to enable smaller companies to sell via Google and integrate with payment and delivery companies such as Square Inc. (NYSE: SQ).

All three of those are great stocks, but they're not e-commerce pure plays. And as I noted earlier, one of the more important competitors to Amazon went completely unmentioned in the Journal article, even though they're growing more than ten times faster than Amazon.

You're not going to want to make the same mistake by overlooking the opportunity they're offering.

The company I have in mind started shortly after Amazon got going. It's an early adopter of e-commerce, but with a twist; buyers get to choose between buying now or putting in bids in online auctions.

You may have heard of it; it's a company called eBay Inc. (NASDAQ: EBAY).

Founded in 1995 as AuctionWeb, the company was the first real avenue for people to buy and sell things to each other over the Internet.

From the very beginning, the kinds of things that are bought and sold on the site ran the gamut from ordinary to odd. For example, the very first sale happened when founder Pierre Omidyar listed a broken laser pointer. The buyer, it turned out, was a collector of exactly that - broken laser pointers.

eBay exemplifies one of my favorite qualities in an undervalued stock - effortless momentum. When a company's product or service is so integral to the market, very little can get in the way of its growth.

eBay Brings the World Marketplace to You

I myself used eBay a lot back when I was a musician, buying and selling instruments and tools.

That experience recently came in very handy when I was looking for a very specialized type of water-based varnish I just couldn't find Amazon or any other site. I ended up finding it halfway around the world from California, through an Australian eBay vendor.

You can find everything from rare varnishes and broken laser pointers to new or used smartphones, computers, designer clothing, and vintage goods. Most sellers find buyers, and eBay takes a generous cut. The site is a flea market, auction house, online hub for big and small retailers, and a place for digital yard sales, all rolled into one.

Because users can rate both buyers and sellers they've interacted with, much of the risk of sending money or goods to strangers online, whether halfway around the world or across town, is reduced.

Of course, eBay also handles escrow accounts to reduce cases of sellers not getting their money as much as possible.

The company has lately been shoring up the balance sheet and operations by selling some units. In June, for example, eBay announced it was selling just over 80% of its South Korean subsidiary to a local company.

The South Korean market is very different from most others, and so focusing on what eBay knows best elsewhere is better in the long run. A price of around $3 billion in cash certainly won't hurt, either.

Less than a month later, eBay announced another sale. This time, it was reducing its stake in Adevinta, a Norwegian classified ads firm, from 44% to 34%.

In return, the company is getting $2.25 billion. Mind you, that's in addition to the $2.5 billion eBay made last year when it sold the same classified ads business, then under its own umbrella, to Adevinta in the first place.

Even better, plenty of that rich price is going straight into investors' pockets. As soon as the deal closed, eBay announced it was increasing its stock buyback program for 2021 from $2 billion to $5 billion.

eBay Has Handily Crushed Most Competition

So far this year, eBay has run circles around Amazon, and the two stocks' price charts tell the tale in stark terms. 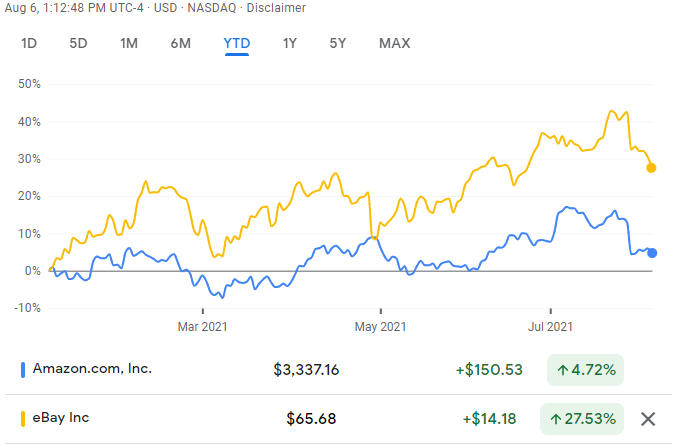 Amazon stock is up 4.72% for the year. Not bad, but it absolutely pales in comparison to eBay's 27.5% year-to-date performance.

And there's still plenty of upside ahead for eBay.

eBay grew its earnings-per-share by 58% last quarter. Even if that performance slows by more than half, to 24% a year, we could still see a double in earnings in just three years.

We'll get a better sense of how the firm is doing against its plan when it reports next Wednesday, Aug. 11. I'm looking forward to it either way.

Should it miss forecasts and the stock sells off, I would view this as a great buying opportunity. After all, this is not just an online flea market - it's a wealth-building tech stock.

Whether you're collecting multiples of Amazon's performance for a tiny fraction of its price or turning every $1 invested into $10, when it comes to a tech-centric portfolio, extreme outperformance should be the rule, not the exception.

For instance, I know a $2 stock right now - an upstart player in the surging EV space. It's already piled on 10X gains over the past year, and now it's looking to go public on a big American exchange.

Should that happen, its 1-year 10X run could potentially be in for a repeat performance - or maybe even better.

Let me walk you through what's happening here as this little stock seeks an IPO on the Big Board...