The granddaddys of cryptocurrencies is waking up from its nap - fast.

After a sharp, brutal drop in early May, Bitcoin recovered somewhat, only to spend most of July bouncing around in the low- to mid-$30,000 levels.

But Bitcoin's got its mojo back; it's overcome all kinds of resistance, and now prices are hitting three-month highs.

That means we've got a couple of crucial price levels coming up fast, and what happens over the next few days and weeks is going to set the stage for what could be a very profitable autumn for Bitcoin - and some of the other digital currencies that usually tag along.

An Exciting Time for Bitcoin - Here's Why

There were rumblings from Washington, D.C., over the weekend, too. There were big proposed changes on the table in the way cryptos, including Bitcoin, are taxed and reported, but at the moment, those are just rumblings; nothing concrete has happened yet. I'm watching this story closely, and I'm not alone: Some of the biggest names in crypto, like Coinbase Global Inc. (NASDAQ: COIN) CEO Brian Armstrong, are on alert for regulatory changes, too.

In fact, there was more good, bullish news this weekend than bad. Crypto investors got some help in the form of a kind of Bitcoin short squeeze when, according to Datamish, some big Bitcoin short positions threw in the towel on Friday and covered their positions, lending some extra strength to that important $40,000 level.

Now, Bitcoin had been comfortably above its 50-day moving average (MA50) over the past week or so, but as you can see on this chart from Aug. 9 midday trading, it's now broken above its 200-day moving average (MA200). That MA200 is important for all kinds of reasons, because when an asset falls below that level, it's a very bearish sign, but on the other hand, when that asset breaks above the MA200, it's a bullish signal, and that's what we're seeing today.

Now, $45,000 is important, and we are there, but technically, it's not the most important level we have in front of us.

If you've been with me for a while, you know I like to use the Fibonacci retracement when looking to find support and resistance, plus the depths of any pullback.

I've got those "Fibo" levels for you right here, courtesy of a screenshot from my YouTube livestream session Monday morning. 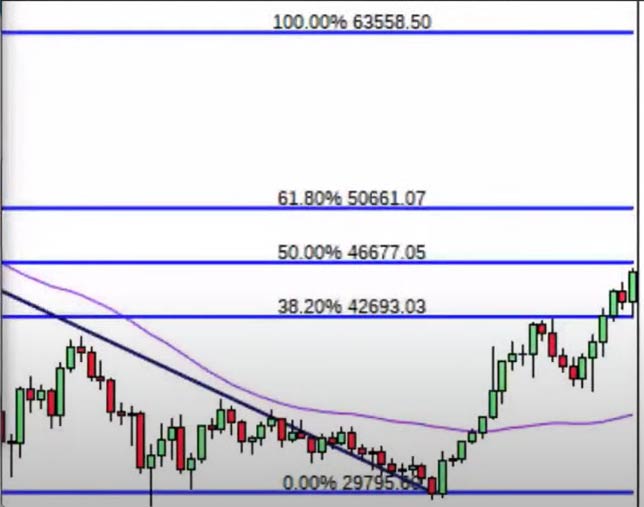 From this, we can see that the next really big, make-or-break price for Bitcoin - $46,677 - is just up ahead around the corner. It's a level we could hit by Wednesday, if not sooner.

A "clean break" above that $46,667 level - where Bitcoin punches through to the upside and stays punched through - could mean we'll see buying accelerate from here.

We've had, by any stretch, a hot, hot rally over the past few days, so we might see a little selling over the next few sessions, but the action and momentum suggests Bitcoin probably has the juice to attain that $46,660 level and stay there.

From there, Bitcoin is within striking distance of the next resistance/support level of $50,661, and we could get there in a hurry.

I think you've got to be a buyer here at these levels, and given the strong push toward the next important level, any selling or profit-taking we see between here and that level should be seen as a buying opportunity. Investors shouldn't shy away from buying Bitcoin at downturns - even though those downturns can be brutal. When you buy lower and lower, you're lowering your dollar-cost average, which folks should always be looking to do.

So, I'm watching and buying as we close in on $46,667, and I've got my eye on $50,661. It's a little early to say for sure with any certainty, but if Bitcoin can reach and maintain that higher level, then I'm feeling really optimistic about heading back to those April highs of $63,558.

Bitcoin's getting exciting and lucrative again, but the truth is, the crypto market's always been exciting and packed with profit potential for folks who know where to look.