The "chicken littles" always find new reasons to say the sky is falling. But whether we like it or not, a broken clock is right twice a day. And with the market at all-time highs, what goes up must eventually come down.

Eventually is a key word here. But how eventual is the coming stock market crash? 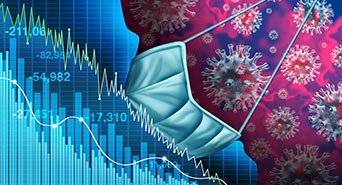 Sure, anyone can look at an uptrend on a graph and tell you it's going to reverse. But it's not just the fact that the market is high. Other signals accompanying these markets point to a rough year ahead.

The most obvious right now is inflation, which causes overvalued stocks and pumps the Dow and S&P 500 the way we're seeing today. Usually, high inflation can poke a tiny hole in a bull market - one that leaks air over the long term. And the July inflation numbers just came in...

The July report from the Federal Reserve said consumer prices climbed 5.4% in the last 12 months. In their June report, used car prices had popped 10%.

This has all taken place around the Fed's dovish policies attempting to stimulate the economy with $120 billion monthly bond purchases and keeping interest rates near zero.

The latest Fed activity has been in response to a year were restaurants closed and many were put out of work by the pandemic. Well, now that COVID-19 variants are emerging, the Fed might see fit to continue its dovishness.

So, we're venturing further into a market where stock prices don't reflect the actual underlying value of stocks. That means stocks could come tumbling down at any moment.

If you want to be ready for what's coming, we'll show you how to be as prepared as possible. First, here's why you should probably get ready yesterday...

We Can't Run on Debt Forever

All-time highs are less exciting when you find out they are propped up by lots of corporate debt and leverage.

This trend has been building over the last decade as $6 trillion in U.S. corporate debt has climbed to $11 trillion from 2010 to now.

The pandemic has only accelerated the borrowing, and now global debt is higher than ever - $281 trillion, according to the Institute of International Finance.

In 2020 alone, margin debt among U.S. investors soared from $561 billion to $779 billion. That's a sign many investors out there could be overleveraged, which means they will be forced to sell as soon as markets start to drift downward, sort of a domino effect.

You hear this all the time in conversations about debt, whether it's national debt or commercial debt. Someone eventually has to pay. And we could be hitting a breaking point.

It goes back to stocks being overvalued. Here's how we really know this to be the case...

We alluded to this earlier, but one major red flag for a stock market crash is when stocks are simply overvalued. Right now, they're at all-time highs.

You can confirm they're overvalued with more than just the Dow and S&P 500 numbers. A little thing called the Shiller price/earnings (P/E) ratio gives us the cyclically adjusted average P/E ratio for the S&P 500 over the last 10 years.

Today, the Shiller P/E sits at 38. Not only is this the highest since the 2000 dot-com bubble burst, but it's more than double the 148-year average of 16.78. What that tells us is that current valuations could potentially be exaggerated by more than double.

The Shiller P/E also has historically predicted crashes, most notably in 1929, ahead of the Great Depression, when it was 32.56.

So, a Shiller P/E of 38 might be cause for concern, but we're just getting started.

If that doesn't convince you to gear up for a stock market crash, there's more...

Another way to tell companies are overvalued is by looking at price-to-sales. Simply put, if a company's stock price is significantly higher than its revenue compared to other companies, it's overpriced.

To get an idea of whether stocks were overvalued, Money Morning's Dave Zeiler screened for stocks with prices with price/sales ratios higher than 10. A P/S above 10 usually means investors are paying $10 for every $1 of revenue generated by a company - it's overpriced.

This could be worse than it sounds. Sure, stocks are overpriced, but zooming in on a particular industry like tech raises further concerns...

According to Bob Farrell, chief investment advisor for Merrill Lynch, "Markets are strongest when they are broad and weakest when they narrow to a handful of blue-chip names." Today, we are looking at the latter sort of market.

Much of the money is concentrated in tech stocks like Amazon.com Inc. (NASDAQ: AMZN), Apple Inc. (NASDAQ: AAPL), and Microsoft Corp. (NASDAQ: MSFT). And we just confirmed above that much of that money is based on inflated valuations.

There, you have a market priced far beyond what it's worth, with most of the money getting funneled into "a handful of blue-chip names."

Good news is that you can be prepare for the fallout. Here's what you do...

How to Prepare for a Stock Market Crash

Before anything else, stay calm. Don't go selling everything at the drop of a dime. This is a time to be extra vigilant in your decision making.

Take a careful look at your portfolio and see which stocks have been dragging you down. Sell any dead weight.

On the other side, look for stocks up 100% or more and take some profits to pad your emergency fund before things go south.

Next, you want to create a shopping list of stocks you'd like to own but are undervalued. You can rush to these in the event of a crash and get them at a discount.

For even more insurance, you want to tighten your trailing stops. This is an automatic "sell" trigger if a stock falls by a certain amount, specified by you ahead of time. In a crash situation, this helps limit your losses.

Finally, make sure most of your portfolio consists of stocks that can weather the storm. Those will be value stocks and emerging market stocks like renewables. Certain funds can combine both of these.

At the end of the day, you want to make sure you are diversified, that your investments match your risk profile, and that you have some emergency on the sidelines to help you improvise.