For two months now, biotech companies have been talking about the eventual need for a coronavirus vaccine booster in at least some segments of the population.

Yesterday, sources inside the Biden administration told USA Today that the government is planning to recommend vaccine booster shots for all Americans no sooner than eight months after they received their second shot of either mRNA vaccine.

And of course, there are broadening vaccine "mandates," too, all over the public and private sector, such as the Pentagon's requirement that most of the country's 1.3 million military personnel get vaccinated.

That puts the so-called "vaccine stocks" - the handful of biotech firms that developed effective coronavirus vaccines last year then skyrocketed accordingly - right back into play.

This time the game board is different. There's the highly infectious SARS-CoV-2 B.1.617.2 "delta variant" to contend with, and the unsettling prospect of other, potentially more dangerous variants, too.

More importantly, there's a different product pipeline now, and new applications for the vaccine technology that's proven itself under fire and is on the way to becoming the new gold standard for many vaccines and therapies still on the way.

Conditions are looking good for another, potentially bigger round of profits for folks who buy the right vaccine stock, and I think one company looks better than the rest this time...

Make No Mistake: These Vaccines Are Effective

The media is full of reports of "breakthrough" COVID-19 infections in fully vaccinated individuals, but many lack the important context that puts breakthrough infections into perspective.

And that context is this...

The Wall Street Journal, analyzing reports from 45 state health departments, counted around 193,204 infections in vaccinated individuals between January and early August, 2021. Those infections represent just 0.1% - one-tenth of one percent - of the 136 million-plus vaccinated Americans. Less than 0.004% of those vaccinated folks with breakthroughs had to be hospitalized, and less than 0.001% of them died.

Anecdotally, on a personal note, I've had seven fully vaccinated friends come down with the coronavirus, but none of them were sick at all. One didn't even know she had it until she got a positive result from a routine test.

So, while no vaccine on Earth is 100% effective against any virus, clearly, these vaccines are extremely effective at keeping people alive and out of the hospital, even accounting for delta variant infections.

A big reason for this effectiveness, not to mention the world-record speed at which they went from the drawing board into hundreds of millions of arms, is messenger RNA (mRNA) technology.

The Tech Behind the Vaccine "Moonshot"

Of the "Big Three" coronavirus vaccines currently authorized for use in the United States, two were developed using this new biotech - a completely new way of teaching the human body to fight off a virus that to date has infected at least 208 million people and killed at least 4.37 million of them.

I want to be absolutely clear: The vaccine doesn't actually affect your body's genetic code. Your DNA is unaffected.

In short, when your cells create proteins out of their DNA, they don't use the DNA directly. Instead, cells transcribe their DNA into RNA, a similar compound. The cell's protein factories then translate the RNA into proteins, destroying the RNA in the process.

The mRNA vaccines use this process to, essentially, "trick" cells into creating specific proteins that make the cells look as if they have been infected by something - in this case, the SARS-C0V-2 "spike protein" the virus uses to infect cells.

But that's an illusion. Your cells are perfectly healthy; your DNA never changes. What's more, the mRNA in the vaccine degrades quickly, within a matter of days. Messenger RNA is extremely fragile, which is why the mRNA vaccines need to be kept at super-low temperatures.

This technology is a game changer - mRNA vaccines sidestep many of the concerns about vaccines that use live, inactive, or attenuated viruses or components of viruses, which in rare cases can infect the people they're meant to protect.

They're also much, much faster to produce at scale. Before mRNA vaccines, the Merck Mumpsvax mumps vaccine was the reigning "speed record holder" in the vaccine arena, and it took nearly four years to go from the drawing board to the market. And, as we all know, the first mRNA vaccines were being administered barely one year after SARS-CoV-2 emerged.

It's thought that as many as 320,000 virus species can infect mammals, and as of today, science knows of around 219 species able to infect humans, from common colds to the deadly Ebola. There's always a risk that a 220th will emerge to wreak havoc on society. Messenger RNA vaccine tech is humanity's "ace in the hole" against an unwelcome development like that.

The COVID-19 pandemic lit a fire under the already promising field of mRNA vaccine research, but research into their use against influenza, rabies, Zika virus, and cytomegalovirus was far along when COVID-19 began to shut the world down in March 2020.

This Biotech Firm Was Always an mRNA Leader

Moderna was further along in its research than just about anyone else, but that's not the only reason I'm recommending it today.

The company was founded in Cambridge, Massachusetts, in 2010 with the goal of commercializing mRNA technology. Moderna shares only listed in 2018, though, about two years before its breakthrough vaccine would make it a household name.

It was the focus on mRNA tech that enabled Moderna to pivot from its other avenues of research to COVID-19 so quickly.

But I don't think people understand just how breathtakingly fast that pivot was...

Chinese scientists published the full genetic sequence of SARS-CoV-2 in early January of 2020. Moderna, which, as I said, was a leader in mRNA vaccine research, was first out the gate with a list of promising vaccine candidates - and a test dose of COVID-19 vaccine - just 63 days after the genetics information hit the Internet.

It's true that the Pfizer-BioNTech partnership was first, by a week or so, to gain authorization for its mRNA vaccine, but its "edge" over Moderna in that one sense was limited, and investors clearly preferred Moderna, a fact that comes across when you compare stock charts for the past year. 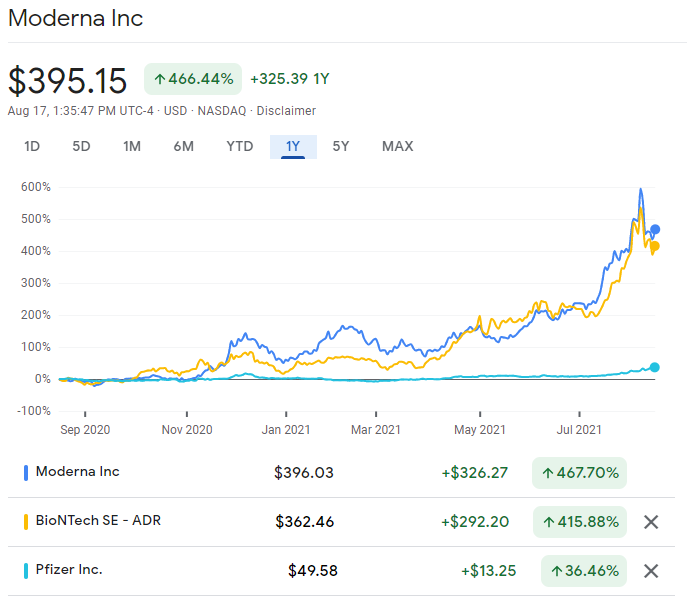 Both mRNA vaccines are great, and one is about as effective as another, but it's what's coming next that's likely to cement Moderna's position as the vaccine stock to own.

As you read this, Moderna is hard at work developing 24 additional vaccine candidates - over and above its continuing research into the COVID-19 vaccine and how it could be tweaked to better ward off variants.

Among these candidates is an annual vaccine booster for 2023 and beyond. Existing flu vaccines are anywhere from 40% to 60% effective at preventing severe disease - this qualifies as "good" protection, but Moderna is working to move the needle into "Excellent" territory. The company is also working on vaccines for HIV and respiratory syncytial virus (RSV). RSV is coming back in force as societies reopen, and it's beginning to show up out of season, too. The respiratory virus can seriously harm infants, toddlers, and the elderly.

Beyond the vaccine sphere, Moderna is developing 13 different mRNA treatments, including five for cancer; it has two autoimmune therapies in clinical trials at this point.

So Moderna is anything but a one-hit wonder whose stock has already "popped." If, for whatever reason, you missed MRNA shares' big rocket ride, there's still much more to come.

This company has the kind of pipeline that can generate billions in sales over the next decade and beyond.

With all that said, it's undeniable earnings growth over the last three years has been weak; the company has understandably plowed so much capital into R&D. But in the quarter ending in June, Moderna earned $6.46 per share compared with a year-ago loss and came on the back of a 6,400% sales increase.

Moderna also raised forecasts for the year. For 2022, it has already signed contracts to deliver $12 billion worth of COVID-19 vaccines. Not only that, but clients have options to purchase more doses worth roughly $8 billion.

To be conservative, let's project that per-share profits average 25%. At that rate, earnings will double in about 33 months - and, being conservative, that doesn't account for the likelihood of a Moderna breakthrough on any one of the several trials and lines of research it's working on.

This progress isn't happening in a vacuum. All over the world, but particularly here in the United States, we're seeing an explosion in creativity. Whether it's getting a lifesaving vaccine to market in record time, or delivering some other game-changing tech breakthrough, can-do spirit, good old-fashioned entrepreneurialism (and hundreds of billions of dollars in fresh capital since November 2020) are combining in an explosion of profit potential.

No wonder, then, that there are more than 500 private companies of all kinds looking to go public in the United States right now. This can be the best time to claim a stock in these companies using something called "pre-IPO rights." It's possible to claim these for $1 in many cases, but, should the company go public, these rights can have stratospheric profit potential - peak gains of 2,088%, 6,566%, 8,280%, 9,075%, even 27,550% have been realized in exceptional cases. You can learn some more about these remarkable instruments here...

what happened to vxrt?