For months, biotech companies and government officials talked about eventually needing a coronavirus booster vaccine. Now that the delta variant accounts for 98.8% of new U.S. infections, the possibility of wheeling out a booster is more real.

Moderna Inc. stock (NASDAQ: MRNA) got a huge pop since rolling out its initial vaccines. It's up 466% year over year.

Now, investors hope another round of vaccine distributions may fuel the company's bottom line and translate to similar gains. They could be right... 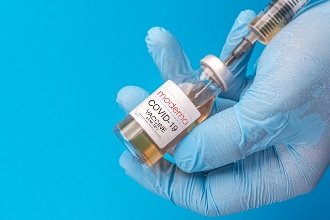 On Wednesday, the Biden administration announced it will begin offering booster shots the week of Sept. 20, after concluding that a third shot is needed to fight off decreasing immunity.

The booster shot plan only applies to the Pfizer-BioNTech and Moderna vaccines. It calls for Americans to get a booster shot eight months after receiving their second doses.

Although the Biden administration's plan has drawn mixed reactions, one thing is certain: A second wave is coming to vaccine stocks.

Here's why Moderna stock is one of the best stocks to buy now...

It's no secret Moderna struck gold with its first approved commercial product, the COVID-19 vaccine. The company was further along in its mRNA research than about every other biotech vaccine maker. And its focus on that enabled quick and effective vaccine distribution.

The company has been busy researching and developing messenger RNA technology since its founding in 2010. Messenger RNA (mRNA) basically trick cells into creating proteins that look as if they've been infected by something that a virus uses to infect cells.

The last eight years of research positioned the company to succeed amid the vaccine race - mRNA vaccines are much easier to mass produce quickly.

Money Morning Defense and Tech Specialist Michael A. Robinson gave some conservative projections on MRNA with per-share profits averaging 25%. At that rate, earnings will double in about 33 months.

Creativity in biotech research has boomed internationally, with the United States at the forefront. Whether it's wheeling out life-saving vaccines in record time or developing another game-changing tech breakthrough, an eruption of potential profits is in reach for any one of these companies.

Moderna has more than enough potential to be a titan in the industry and is already making waves.