Most EV companies post bold numbers to increase investor and consumer interest. Many of them might even refer to themselves as "Tesla Killers" with nothing to back it up.

But Lucid Group Inc. (NASDAQ: LCID) seems different. This company is the product of a SPAC merger with Churchill Capital Corp. (NYSE: CCIV), one of the most talked-about to date, billed as the largest SPAC deal ever for an electric vehicle stock, at $12 billion. 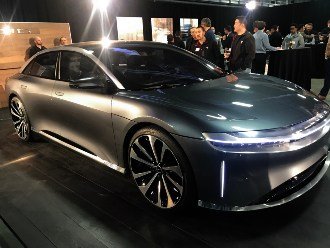 Early in 2021, management provided its own five-year CCIV stock prediction. The difference between Lucid and the EV flops in the past is that it has a product, at least. More importantly, the experts have good things to say about it.

MotorTrend recently highlighted Lucid for greater battery efficiency than the Tesla Model S as well as a cost-effective powertrain developed in-house. So, we see the technology impresses the industry, and production looks tenable.

Do these factors make Lucid a "Tesla Killer" though?

CCIV stock popped 540% when rumors of the merger hit, going from $10 to $64. It quickly tanked and leveled off in the $20 range, but months later, we're starting to see new bearish momentum.

You see, IPOs and SPAC mergers usually involve a "lockup" period to prevent early-stage PIPE investors from piling their shares into the market and quickly diluting the price. Unfortunately, this sometimes becomes a matter of putting pain off for later.

Here, we see a case of the early CCIV investors taking profits on the $15 shares they bought earlier. Unfortunately, they only took home a couple bucks per share, fractions of what they would have made many months before.

Shares rallied back to $18, however, and Lucid appears to have plenty more in the tank. If the company can only manage to pass a couple specific milestones, it will prop up the long-term "buy" case for Lucid stock.

And here it is.

The biggest reason early investors have piled out of Lucid was likely the apparent lag in its hallmark product release, the Lucid Air Dream Edition. Now that we're in September, the Q4 2021 projection is starting to look questionable.

However, Lucid did instill more confidence after announcing a production preview event where it will test-drive cars at its Casa Grande, Arizona facility. That's certainly more transparency than we got with Nikola.

We know it has a product. We know it has plenty of preorders. And that lends further confidence to the company's projections for itself down the line.

In five years, it expects 36,000 Lucid Air deliveries and 12,000 SUV deliveries. The SUV model is called Gravity and is expected to make up more than 60% of total deliveries by 2026.

What does Lucid expect to deliver in 2026? Two hundred fifty-one thousand vehicles, total - 134,000 of which will be SUVs.

On top of everything, Lucid expects to reach profitability by 2023.

Of course, the biggest, most imminent test of whether there's any merit to these claims will be whether Lucid can take its targeted 0.6% of the global EV market share in 2022.

There's clearly more to Lucid and its product than most other EV stocks out there. Considering all of this, here's how you should play this stock in the meantime.

[Join over 500,000 readers and get free daily updates on the best ways to make money. Subscribe to Money Morning.]

Should You Buy Lucid Stock?

Lucid Motors has the pedigree and the team to make waves in the electric vehicle market.

Founder and CEO Peter Rawlinson was the vice president of Vehicle Engineering at Tesla. He led the team that took the Tesla Model S from an idea on paper to production.

Before coming to Tesla, Mr. Rawlinson was head of vehicle engineering at Corus Automotive, chief engineer at Lotus Cars, and principal engineer at Jaguar Cars.

That's quite a resume. But it does not stop there.

The vice president of design at Lucid is Derek Jenkins. Mr. Jenkins was formerly at Mazda, where he designed the 2016 MX-5 Miata, Shinari Concept, CX-5, Mazda6, Mazda3, and the 2017 CX-9. Before Mazda, he was the chief designer for Volkswagen North America.

Peter Hochholdinger is Lucid's vice president of manufacturing. He was also at Tesla, and before that, he was the senior director of production for Audi's A4, A5, and Q5.

So, what's this all getting at?

The management team at Lucid Motors knows how to build, design, and sell electric vehicles.

The Dream model delivers 1080 horsepower that can take the car a quarter-mile in 9.9 seconds at 144 mph. The Dream is said to top out at close to 170 miles per hour. The Lucid Air will be capable of traveling more than 500 miles before needing a recharge.

The Lucid Air may well be a serious rival for Tesla in the upper-end electric vehicle market.

But here's where that gets tricky...

Lucid has not sold a single car yet.

Yes, Lucid has successfully landed 11,000 reservations across its Air product line. It also plans to roll out a luxury SUV called the Lucid Gravity in late 2023.

It will be a long time before it produces and sells enough cars to turn a profit.

If you're a true believer and willing to risk some speculative capital, you can stash this away for a few years and hope to see it rival Tesla.

If you're thinking more short term, then momentum is your friend.

There could still be a lot of excitement as the Lucid Air release date comes closer. It is an exciting car and is going to attract a lot of attention when it rolls out.

Enjoy the ride higher, use trailing stops to protect yourself from sharp drops, and bail at the first sign of weakness.

If you really are looking for a big gain sooner, however, check this out...