Six straight down days on the Dow and S&P 500... Five straight losses on the NASDAQ. It's just after opening on Wednesday, and it looks for all the world like the markets are on track for their worst month since October.

That makes the micro-cap stock recommendation I'm about to give you even sweeter...

While the markets are on track for losses, this tiny stock is on track for gains - big gains. How big? Try the second 300% run in a month.

I'll give you the charts, the ticker, and special buying instructions in just a second...

The One That Almost Got Away

Immunotherapy has been around a lot longer than you realize, I bet. Crude therapies were in use as far back as the 1600s, but it really came into its own in the 1980s. For a long time, if a person came down with cancer, the two most common options were surgery, radiation, or chemotherapy - the last two of which are literally poisonous. It's complicated, for sure, but the upshot is immunotherapy "tweaks" a person's own immune system to turn it against the cancer and go on the attack.

This is a great, promising therapy, but I'm not an oncologist, I'm a stock technician - a quantitative analyst. So let's put a pin in our oncology discussion and get down to business.

I've been following Regen since mid-August, and it's been a wild, wild ride. I recommended it on Aug. 20 when the stock was trading at an unbelievable $0.02 - that's right, two cents.

The stock was rallying at the time, and these kinds of rallies in these kinds of stocks tend to be short and violent, like my chart from the time shows.

The challenge was to get in and set a trailing stop to protect our position, then double our money - at least 100% profits - and make a clean getaway.

Some of my readers had a chance to do that, but the rally was shorter and more violent than even I anticipated; some folks missed out, but others got a crack at as much as a 300% gain. I felt terrible that some of us missed out, and I said as much a few days later when I wrote with an update.

I'm writing again today because the charts show that a very, very similar situation is taking shape again. The profit potential should be just as big, or even bigger. 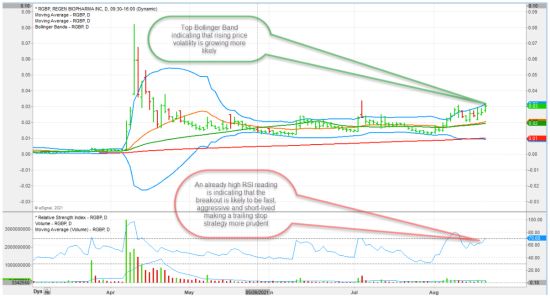 Check Out This High-Profit Setup 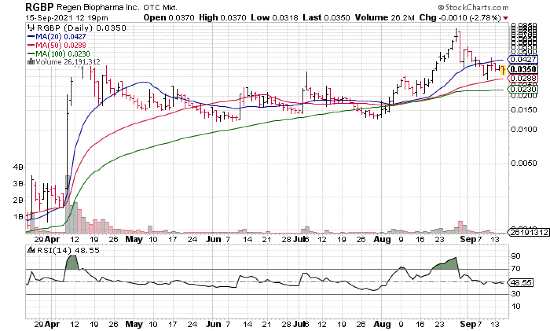 Shares almost touched their 20-day moving average this week. This happened after we saw crescendo volume on the stock as it hit $0.08.

That set things up for a quick retracement to strength, which is exactly what we're seeing now.

The 50-day moving average is still rallying strongly, which tells us that the stock is on the winning side of the trend and momentum trade.

The stock's relative strength index (RSI) readings also normalized, indicating that we should see enough overhead room for Regen stock to post another fast, powerful rally. What's more, volume has bottomed out, indicating that the selling pressure that had built up on shares of RGBP has run its course.

A slight bump in buying volume should shift the tide into another bullish run for the stock, and this time I want EVERYONE there for the festivities - no exceptions!

Buy RGBP up to $0.0425 and set a trailing stop at 10% when the stock hits $0.06 - and you've doubled your stake. That trailing stop, which will move with the stock price, will help protect your buy-in and your profits.

The profits in these kinds of stocks are great, no doubt, but when you stop and think about it, there are a couple of, let's say, "fringe benefits" to investing in these small, high-profit-potential shares. The hidden upside? It probably makes Wall Street furious.

Why do I think that? Well, despite the fact that top performers in this space are returning the market's biggest gains today (I'm talking exceptional peak returns of 4,958%... 6,486%... even 22,207%, all in less than a year among the cream of the crop), it seems Wall Street would rather people were in the dark about the profit potential. One Wall Street firm actually banned their advisors from offering these stocks, for Pete's sake! Well, in this special Money Morning broadcast, Shah Gilani will pull back the curtain and reveal all the details about the kinds of stocks that are offering rare one-year quadruple- and quintuple-digit peak returns. Take a look now, because I don't know how much longer this'll be online.