Palantir has climbed 186% since its IPO in September 2020 - far exceeding analyst expectations. And the PLTR stock forecast for 2025 looks even more promising now. 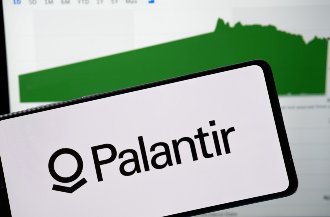 More recently, its tech is being used to trace COVID-19 infection rates, track medical supply chains, and even predict outbreaks in hot zones.

Partnerships with these government agencies and corporations have put this tech stock in a great position within the Big Data industry, a market that was worth $138.9 billion in 2020. It's expected to reach more than $229.4 billion by 2025.

Because of that growth, Palantir expects to generate $4 billion or more in revenue by 2025. Right now, the company sits at $1.33 billion.

So, let's take a closer look as to how PLTR will make this move higher.

How Palantir Revenue Will Reach $4 Billion by 2025

Palantir expects revenue growth of more than 30% from 2021 to 2025. It's an optimistic forecast that suggests Palantir's revenue could rise to over $4 billion in fiscal 2025.

Every year since it's been public, Palantir has continually grown revenue by an average of 31% - right on track to reach that revenue goal.

That's thank to the company's ability to generate sales through lucrative partnerships with government agencies and corporations. This blend of government and commercial contracts has acted as a catalyst for Palantir.

Palantir's partnership with IBM makes it easier for businesses to build and deploy AI applications. Between Palantir's software with IBM Cloud Pack for Data, IBM Watson, and Red Hat OpenShift, businesses will be able to use AI to analyze data across all their systems.

This makes Palantir a market leader in both government and commercial markets for artificial intelligence data analysis.

And being involved in both markets is how it will get to $4 billion in revenue in 2025; Palantir's sales will keep its revenue growing every year.

That's helped generate revenue of $375 million in the most recent quarter, giving Palantir the potential to be one hell of a growth stock story.

When you take a step back and look at the all the trends like autonomous vehicles, renewable energy, infrastructure, and smart cities, they all have one thing in common: AI.

And AI is going to be the backbone for all these technologies.

In turn, it will drive growth of each respective sectors as it modernizes supply chains, manages the government's budget, and operates efficient smart grids. Eventually, it will have a key role in national security, too.

There have been many technologies that have changed the world; AI driven data analysis is going to be another one for the books.

This puts Palantir in the position to be an industry leader.

But the company is not without its risk.

PLTR Has Growth, but It Also Has Risk

Palantir's strong revenue growth is driven by the impressive increase of business. Contracts like those with the U.S. Army (Project Vantage for $114 million) and a renewal with ita aerospace customer for $300 million continue to drive revenue.

But there are risks involved when it comes to the Big Data industry, predominantly around the ethical use of data. Misuse of that data can harm shareholders and the general public.

Take the Cambridge Analytica scandal, for example. In the 2010s, millions of Facebook users' personal data was collected without their consent by Cambridge Analytica through an app it developed called "This Is Your Digital Life" to be used for political advertising. When the news broke, shares of Facebook dropped nearly 20% and struggled to regain ground in the aftermath. With Palantir dealing with government agencies that aren't popular in the public eye, bad news could harm share price.

Despite that risk, Palantir continues to improve on its platform with projects like Gotham, a commercially available counter-terrorism analysts system driven by artificial intelligence. This further opens its market opportunity beyond those potentially controversial government agencies.

And Palantir Foundry, the company's commercial data management platform, serves as a hedge to this risk.

Foundry's commercial revenue was up 90% year over year, thanks to the closing of 62 new deals - each worth $1 million or more. Since commercial activities have no ties to the company's government operations, Foundry does nothing but benefit the company's overall value.

So, should you buy shares of PLTR stock?

The company estimates that its total addressable market (TAM) - or the total amount of money Palantir can make selling what they're selling - is roughly $119 billion. In a market expected to reach more than $229.4 billion by 2025, that's a nice chunk of change. And as AI continues to evolve, that total is going to grow at a rapid pace.

Because of this estimate, some analysts project that Palantir's revenue will reach $9 billion by 2026. And it's well on its way there. The company expects annual revenue growth of 30% or more for 2021 through 2025. At that rate, Palantir will hit that mark of $4 billion in revenue by 2025 - and then some.

But in a time when questions about Big Data and privacy are being raised, Palantir is a bit of a controversial company. It advocates for greater surveillance since that's the company's platform. And its software has been used to identify working undocumented immigrants and ultimately aid in their deportation.

All things considered, Palantir offers a unique product that is highly effective for the government agencies and corporations that use them. And these contracts are often very lucrative, which can be seen in the company's continual revenue growth. This makes Palantir a solid long-term play.

So, if you don't mind the company's business, I recommend adding Palantir stock to your portfolio, as the company has the potential to trade higher over the next four years.

Not a fan of Palantir? There are other opportunities for investors on the market today.

Like this tech stock that's proven itself time and time again...

One Stock to Buy Instead of Palantir