The stock will trade at a range between $14 and $16. Whether Brilliant Earth stock is a buy or not may depend on whether or not it falls within that range. 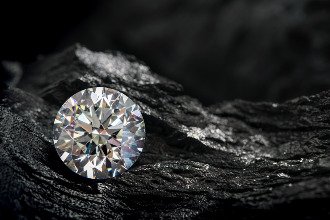 You see, IPOs can be a great opportunity to get in on a stock early. Especially in this case, when Robinhood makes the IPO stock available for retail investors, you want to seriously consider the opportunity.

But you don't want a company valued above its estimated range. That can spell trouble - when the hype dies, the stock will likely crash further than it rose. We saw this with Lyft Inc. (NASDAQ: LYFT) early on. It lost about 70% of its IPO price before turning back around to find its normal price.

Look for the Brilliant Earth stock ticker BRLT - if it's a buy, that is.

What Is Brilliant Earth Group?

The San Francisco-based company was founded in 2006 as an e-commerce website. It was a key part of founding the whole ethically sourced jewelry market.

Diamond mining has long been scrutinized for unsustainable practices - poor treatment of workers and environmental harm. Brilliant Earth sought to provide an alternative to that.

Since then, it has shown rooms in major cities across America, including Chicago, Boston, Los Angeles, Philadelphia, Atlanta, and Washington, D.C.

The company offers both natural and synthetic diamonds. Its natural ones are mind in Canada, Namibia, and Botswana. It also sources sapphires from Australia and Malawi.

Here's how its business has fared so far.

One big question facing the prospective IPO investor is profitability. If a company is not profitable ahead of its IPO, it should make you more cautious.

Fortunately, Brilliant Earth just hit profitability in 2020. It netted $21.6 million after being $7.8 million in the red the year before.

That was much thanks to revenue growth, which continues to accelerate. The company's most recent report showed 78% growth from the same period the year before.

In the same report, Brilliant Earth said its cash holdings more than doubled, going from $65 million to $119.2 million.

Now, whether or not a company is profitable still only gives us a partial picture of the company. Here's the verdict.

Should You Buy Brilliant Earth Group?

Retail investors should consider any chance to buy stocks at IPO price a unique opportunity, at least for now.

It's not often we can buy in at the same time as the fat cats on Wall Street. And if the stock is not a long-term hold, you at least stand to gain in the short term from an initial IPO pop. That is, if it makes headlines, it could drive the price up temporarily.

When a stock is made available on Robinhood IPO Access, you might see a greater initial pop from all the buzz in the Robinhood trading world. This includes plenty of high-risk, short-term traders, many responsible for the short-squeeze frenzy we saw in early 2021.

In short, if an IPO stock is on Robinhood and you see online chatter, there's a chance for short-term gain. But Brilliant Earth could offer some long-term prospects as well.

We've talked about how the environmentalism, sustainability, governance (EST) movement is taking the world by storm. Eighty-eight percent of banks worldwide will have an ESG policy in the near future. Corporate investment has nearly tripled since 2012, from $11 billion to more than $30 billion in 2018, and it's only going to get bigger from there.

Whether or not an ESG mission comes across as some passing "hippy-dippy" trend to some investors is irrelevant. The fat cats are throwing their money at it. It's also coming further into the mainstream consciousness, with wildfires and tropical storms causing world leaders to consider the impact of industry on climate change.

Of course, diamond mining could play only a small part in the carbon emissions depleting the ozone. But in the future, more people will want to do their small part to better the world. And that's the value these mission-based companies provide, in addition to the product.

There are plenty of jewelers to choose from, and an ESG-focused jeweler - one of the first and foremost - could be set apart in the years ahead with a more universal sustainability focus.

Too long, didn't read version: If Brilliant Earth stock stays within its projected range, pick it up.

One Stock to Buy Instead of Brilliant Earth