Very few stocks can match the sheer profit power of stocks that trade over the-counter (OTC), off the major exchanges. Call 'em "micro caps" or "penny stocks," they can move much faster and pack on much bigger gains than their gigantic counterparts.

We're far ahead of the mainstream game here. In fact, I'm constantly surprised more investors aren't in the mix here, playing this segment for every cent they can get.

For one thing, you've got to make absolutely sure your trading platform allows you to tap the $15.8 trillion OTC market. Fidelity and Schwab do, for instance, but some, including Robinhood, don't.

And there's no use dancing around it: I also think penny stocks have a reputation for risk that turns a lot of investors off.

Yeah, about that: Thing is, if you apply the same good technical analysis to penny stocks as you do for stocks 10, 100, or even 1,000 times bigger, you can zero in on the "Best in Breed" and quickly bag the kinds of profits mega-cap shareholders have to wait years for.

That's where I come in: I've run the screeners. I've done the analysis. I've drawn the charts. You don't have to sweat it!

Today I want to show you a penny stock with a setup that's as close to perfect as you're likely to see. We've got a unique situation on our hands.

I'm looking for a quick 37% profit here, but this is also the kind of penny stock that'd be good to hold for years...

A New Bull Run Is Starting

On the off chance you were sleeping or camping out on a mountaintop this past Monday, stocks got clobbered in that day's trading, but they bounced back strongly on Tuesday and even more strongly yesterday.

The minerals sector caught the bid and bounced just as hard as any, and that's where today's best penny stock is found.

Vanadium and Uranium are strategic metals, important to the economy and national security. Investors out there who've been around the block a few times will remember both metals, especially uranium, hitting dizzying highs back in the early 2010s before settling down again for most of that decade. The Global X Uranium ETF (NYSEArca: URA) hit a high above $124 in early 2011, but it sank and drifted sideways for years after that, often trading between $11 and $15 for the rest of the 2010s.

The lull is over, and since 2020, metals like uranium and vanadium have been showing impressive momentum.

URA might be a good way to play the bull, but the stock I have in mind costs a tenth of URA's price, and it should return profits much more quickly...

Vanadium has applications in everything from medicine to defense, and uranium is particularly important for its use in nuclear power generation. The long-term outlook for strategic metals, especially uranium, is extremely bullish as countries scramble to slash carbon dioxide emissions over the course of the 2020s.

That makes Western Uranium & Vanadium Corp. (OTC: WSTRF) an irresistible buy-and-hold target - one that you can own for way less than $3 a share right now. There's "headroom" for this stock to eventually hit multiples of its share price as this revived commodities boom gathers strength. Three dollars may seem expensive for a penny stock - most folks put a $5 "ceiling" on these kinds of stocks, meaning a stock that trades above $5 isn't a penny stock anymore - but it'll seem downright cheap should WSTRF hit $9 or more.

But like I said a minute ago, the technical setup on this stock also suggests a big move in the short term, as well.

While stocks were getting raked over the coals this week, Uranium & Vanadium Corp. was no exception, losing almost a dollar's worth of ground. But like a kid who gets sick and tired of the schoolyard bully pushing him around, its 50-day moving average (MA50) proved to be a line in the sand. The stock fought back in a big way. WSTRF shares were tested at that level, and they came through with flying colors. Volume picked up and investors essentially defended that level beautifully. 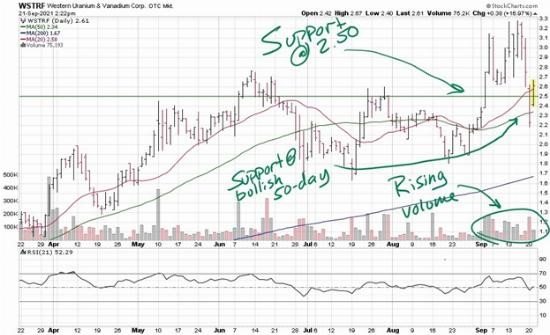 I really don't want to belabor the "fight" metaphor, but the stock has really gone on the offensive since then, putting on at least 3% in gains just yesterday during the second day of the rally. I think the shares can easily reclaim their 52-week highs at $3.28, and I don't think we'll have to wait long for that 37%-plus gain. Buy this one up to $2.75 and put in a 10% trailing stop when the shares hit $3.25 to defend - sorry, couldn't resist! - your principal and your profits.

I know where you can get details on another small stock - a tiny, $2 electric vehicle company that had a wild 1,147% gain over the past year. But now the company is looking to list on a major U.S. exchange - a move it could potentially make any day now. If this EV company gets its big listing, this stock could make another 10x move over the next 12 months - not up to $5, $10, or even $15 - but it could rise to well over 20 bucks per share in that time. Some details on that are here...