I love recommending penny stocks and cheap stocks, but big- and mega-caps absolutely have a place in everyone's portfolio.

I've got some big stocks to share with you today that you can buy outright or buy in incremental, fractional shares, if that's your thing.

From Big Problems to Big Profits

These big-caps could be some of the best plays on the market now, and that's courtesy of rising food prices.

This is something that's staring us in the face every time we shop for groceries. Over the past two years, food costs have risen 16%, which is particularly noticeable in the meat and dairy aisle of your local grocery store. Beef, chicken, pork, fish, eggs - all of these have seen a hike in prices.

This is a major trend - one that I'm watching closely so I can pinpoint the best investments and strategies for, let's say, "delicious" profits.

I think everyone has to start with Tyson Food Inc. (NYSE: TSN). This is a global food company that operates in four segments: beef, pork, chicken, and prepared foods. Each is and will be deeply affected by food inflation.

Back on Aug. 9, Tyson reported strong revenue that beat analyst estimates by 20%, breaking the ten-billion-dollar milestone to score $12 billion in its third quarter. In response, the stock price shot up as much as 14.96% within four days of the announcement. It pays a modest 2.4% dividend every quarter. 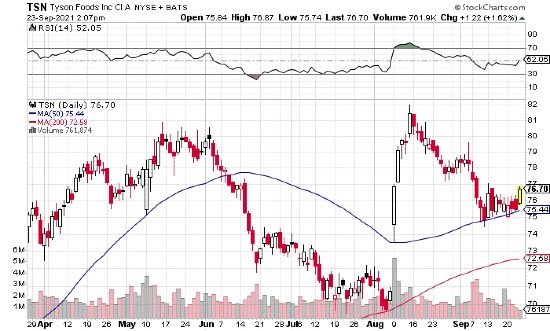 But since then, the prices have come back down in what I anticipate is a consolidation before a move even higher.

ConAgra creates and ships groceries, snacks, and frozen goods, among other things. The company sells its products under many brand names, many of which I'm willing to bet you'd recognize - like Slim Jim, Earth Balance, and Healthy Choice - available in grocery stores coast to coast.

It also beat consensus for its most recent quarter, making over $2 billion in revenue. The only problem is it fell short of yearly estimates, which led to a stock value drop of 10.24%.

But I don't think that downturn is any reason to avoid this stock. It's positioned well to turn a profit over the next few months, if not years. 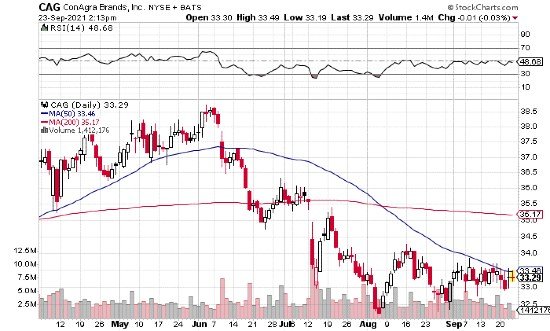 The stock has reformed a tight base, which I like a lot, and it looks as if it could push even higher when it reports earnings again on Oct. 7. I fully expect it to beat estimates once again.

There's one more stock to tell you about - a tiny, $2 stock in the red-hot electric vehicle (EV) space. It had a wild year, by any measure. Last year, it ran up more than 1,140%. This company is now looking to get a listing on a major U.S. exchange, which means it's possible this stock could repeat its quadruple-digit ride in the next year. Not up to $5, $10, or even $15 - but it could rise to well over $20 per share. You can get some details on this company here...