The market's not done with Evergrande. Last Monday, traders were afraid Evergrande would miss a bond payment, and then on Friday, it actually missed the payment.

I wasn't really surprised at the rough ride. My Money Calendar told me ahead of time that this past week is almost always the most volatile, rough week in September.

More important than that, the Money Calendar's also telling me that the week starting tomorrow is likely to be much more bullish as we close out September and move into October.

Hey - glad you asked! I've isolated a familiar group of stocks that the Money Calendar predicts will be throwing off profits left and right over the week ahead.

Let's take a look at what to do with these stocks...

The Road Ahead Goes Up

The hard part - that is, last week - is over. The Money Calendar suggests the buyers who abandoned ship amid the recent sell-off could find their way back to Wall Street next week; cheap stocks are like catnip that way.

The markets' reaction to last week's Fed decision goes a long way to supporting the idea that "greener" skies are ahead. I certainly wasn't shocked by their decision to leave short-term rates alone - I don't think anyone was, really - but what I was really looking for was a "sell the news" effect, and that didn't happen.

Not only that, but our monthly and even yearly highs were hit very early in September, which also suggests stocks are set for a comeback.

A quick look at my TG Suite's "Cheap IV List" tells us a lot of options are on sale right now - options that could pay off in a big way.

Stocks on the Cheap IV list are there because the current nominal at-the-money (ATM) implied volatility (IV) is low relative to the range of ATM IV over the past year.

What does that mean? Let's break it down:

An option is considered "at the money" if the strike price is at or near the underlying strike price.

Implied volatility (IV) is a measurement of expected volatility for the underlying stock over a certain time frame and is priced into the options premium.

Higher volatility expectations (or IV) makes option contracts more expensive. Why? Think about it - options on a volatile stock are more likely to move into the money (ITM) and become profitable, relative to a stock that just stagnates, right?

If you want a quick profit buying options, you want a stock that can move before the option expires, not some snoozer that trades in a five-cent range for days at a time... But, usually, you gotta pay up for that privilege.

These Options Are Ridiculously Cheap 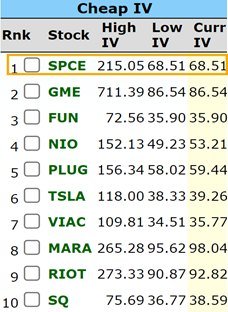 The stocks on the Cheap IV list below got there because data indicates their ATM options are priced at a relative bargain, compared to the past year.

Notice anything familiar about the list of stocks to the left? They're mostly "Meme Stocks" - the same stocks that have seen extreme volume following viral WallStreetBets hype, like GameStop Corp. (NYSE: GME)

At the top of the list, actually, is none other than Virgin Galactic Holdings Inc. (NYSE: SPCE), which was at the center of that insane space race between Sir Richard Branson, Jeff Bezos of Amazon.com Inc. (NASDAQ: AMZN), and Elon Musk of Tesla Inc. (NASDAQ: TSLA) - also on the list (again).

Nio Inc. ADR (NYSE: NIO) has been called the Chinese Tesla, and its current IV is also at the low end of its range, suggesting ATM options are relatively cheap.

It's very likely these stocks you see here will surge based on 10 years' worth of historical data, and if they do, IV and option prices will rise with them. That's a ride I think everyone wants to be on right now.

Still, there's not too much time left to take advantage of these trade ideas.

I'm targeting common, historical patterns on the market and using them to deliver chances at making massive gains. With probability so strongly in our favor, I think this is one of the most consistent, effective, and reliable ways to make money.

Fast Fortune Club subscribers have a lot of opportunities throughout the month to make money on my research, and I'd love it if you'd join us.