First Watch stock hits the NASDAQ this week. The growing breakfast-lunch restaurant chain will trade under the stock ticker FWRG.

But is the First Watch IPO a day-one buy? 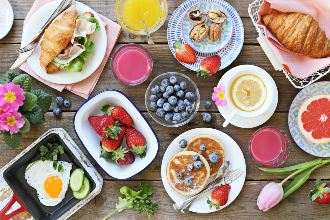 Often, with IPOs, the answer to that question is not so simple.

You want a company valued fairly, with sound fundamentals. But you have little information to go on when it's not publicly traded yet.

That makes IPO investing something of a gamble. Shares can rise in the hours ahead of the first day and then plummet to the ground the next.

And with a faddish industry like food, where restaurants come and go in a flash, the situation is even scarier.

We'll help you out, though. Here's what you should know about First Watch stock and if it's worth buying at first sight.

What Is First Watch Stock?

First Watch was founded in 1983. The first location was in Pacific Grove, Calif.

Now, it's based in Bradenton, Fla., and has over 400 locations, not including 88 franchises around the United States.

As the name implies, this restaurant serves food between the hours of 7 a.m. and 2:30 p.m. Its emphasis is on wholesome, healthy breakfast and brunch, avoiding heat lamps and deep fryers.

You can be sure it serves avocado toast.

First Watch made some headway expanding across the country by purchasing other restaurants and converting them to First Watch locations.

One notable franchise involved was an Arizona restaurant called The Good Egg. First Watch bought The Good Egg and so far, has converted 18 of its stores.

The company did the same thing with a Colorado breakfast joint called Egg & I. It seems First Watch wants to preserve the brand of a few of the locations.

Nearly 80% of First Watch is held by an even bigger holding company, Advent International. Advent will continue to be majority shareholders after the IPO.

It's great that the First Watch brand appears to be catching on across the continent. But that's never the whole picture.

Let's talk about the money.

One item that can make or break a "buy" case for a stock is profitability. When a company is not profitable, you at least hope for revenue growth potential.

Luckily, First Watch just reached profitability this year. It reported $1.8 million profit for the first half of 2021 after netting a $31 million loss for the same period a year prior.

That was all on revenue of $281 million, which was more than double the same period last year. There, you have both profitability and accelerating revenue. Both good signs for an investment.

The company's growth can also be attributed to plenty of help from private equity investment. It maintains Advent International as the primary holder, supplying capital for the big moves.

But before that, First Watch was funded largely by Catterton Partners. An investment of $35 million from Catterton Partners in 2004 enabled this company to spread its wings in the Midwest and Southeast United States.

Today, it can be found coast to coast.

But if you were to find its stock tomorrow, the question still stands...

Is First Watch Stock a Buy?

IPOs typically carry more risk than stocks that have been trading for a while. The market does not fully know how to value them yet. They see a brand name, and they run with it.

This sends stocks soaring and then tanking later, as we talked about. And the movement can happen in a matter of hours.

Early investors have an opportunity to profit from this, since they can take advantage of the market hype and sell the stock at an inflated price. But most people don't get access to that. Robinhood IPO Access has offered IPO stocks to retail investors with some success, but that's still only a handful of companies going public.

The bottom line is that, if you're not a bank, you're putting your money in a highly volatile place when buying a stock as soon as the IPO happens.

But while some restaurant IPOs could be written off immediately, this is still one to watch. It is both fast-growing and profitable, and everyone loves brunch.

The move here is to see if you can get the stock at a lower price after the market is done pumping it up. The irrationality of the crowds could even drive the price far below fair value, mirroring the irrational rise before it.

That's all to say that you have plenty of time to see what this one does day-to-day. It's a promising restaurant chain. But you want to be careful, due to the nature of the restaurant industry.

We said weeks ago that the F45 stock (NASDAQ: FXLV) would flop because of how people fall in and out of love with workout trends.

Similarly, if a restaurant is not here to stay forever, it's not a buy.

First Watch might not be a home run, but there is an IPO coming up that we think will offer 200% returns...