Inflation and Treasury yields, the delta variant, worries about the infrastructure bill, government shutdown, and even solvency fears, the supply chain crunch, and even Evergrande - there's a lot for markets to worry about, and that certainly comes through in their uneven performance over the past few sessions.

Big-cap tech stocks, always sensitive to interest rate shenanigans, have particularly taken it on the chin over the past few sessions.

But the stocks I've got in mind today are smaller - penny stocks, in fact - and with more upside potential, too.

Here are the tickers and charts...

There Are Big Things in Store for These Little Stocks

I recommended this lithium penny stock back in August as a way to position yourself for clean energy and electric vehicle profits, and the stock is about to throw off a whole new round of profits.

I'm talking about Neo Lithium Corp. (OTC: NTTHF). As you can see on the chart below, the critical 50-day moving average (MA50) is trending higher and providing support for the stock at the $3.30 price range. 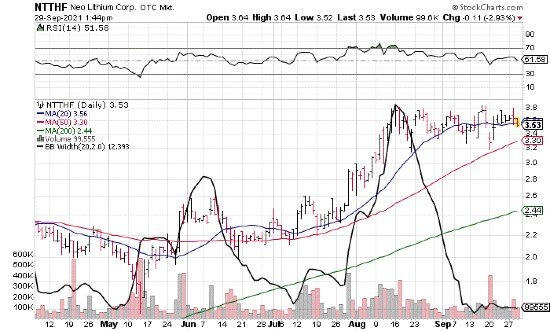 Meanwhile, the 20-day MA - my beloved "Trader's Trendline" - is bullish and adding support to current levels.

Now, given the volatility we've seen, we may see a dip below the 20-day in the short term, but there's another, stronger technical signal that's alleviating my concerns about a drop.

Volatility has slowed since mid-August, but now they're tightening up, as seen by the pink lines in the graph.

This strongly suggests that a volatility event is incoming, and we should see the stock's movement accelerate higher to the $4 level.

In addition to this volatility expansion, volume is on the rise, indicating that the market is starting to notice this stock.

Which means any volatility move could be accelerated by an increase in trading volume as investors feel the FOMO and chase this stock higher.

My recommendation is to buy or add to your NTTHF position up to $3.75, and add or adjust your trailing stop when the shares hit $4 to protect your principal and your profits.

Just about everyone should be familiar with the next name on my list - it's a company that's been through a lot of twists and turns over its 110-plus year history.

I'm talking about Rolls-Royce Holdings Plc. (OTC: RYCEY). This particular incarnation of the UK-based legacy firm isn't the luxury car maker, which was bought by BMW years ago, but it's in a whole 'nother league of go-fast machines: aerospace and defense. Rolls Royce is famous for its jet engines - it's made dozens of military and civilian models over the years - and if you've ever flown commercial, there's a very good chance they made your plane's engines.

That said, Rolls-Royce has fallen behind its American rival General Electric, but most of Boeing's 787 Dreamliner models will bear the iconic "RR" logo. The other big headwind is obvious, too: This company was more exposed than most to the worldwide COVID-19 shutdown in travel, as major plane makers like Boeing and Airbus shut their order books. 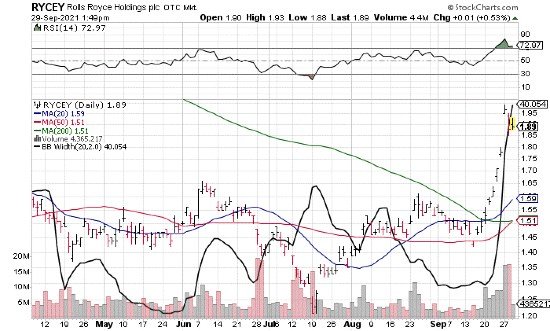 This penny stock is up 20% for the month, which speaks well of its recovery prospects - not a lot of other stocks can say that. Additionally, its major trend lines, including that all-important MA20 "Trader's Trendline" are all trending up. I think this stock could make another run at its $1.97 high and then some. Grab this one at market, then apply a 10% trailing stop when shares hit $1.97 to protect yourself.

Then I want you to take a hard look at this $2 electric vehicle (EV) stock Michael Robinson told me about. This tiny company went on a quadruple-digit (1,147%, to put a point on it) tear over the last year, and now the firm is looking to make an IPO on the "Big Board" - a major American exchange. That event could happen any day now, but when it does, it has the potential to spark another 1,147% surge over the next 12 months - potentially as high as $20. Here's what you need to know right now...