There's a lot to love about penny stocks and other shares that trade over-the-counter: They're inexpensive, they can double or better at the drop of a hat, and - let's be honest - they can be pretty exciting.

I mean, making money is always exciting, but watching a small bet return a big payoff in a few days - that's something else.

But penny stocks also offer something you don't get in big stocks like Tesla or Microsoft: You can get second and even third chances at massive profits.

The truth is, when you're watching a penny stock, you might very well miss the first crack at 100% or more in gains. But when the stock is good and the technical setup is right, you've got a decent shot at watching history repeat - and you won't have to wait long, either. Good luck waiting for AMZN or PYPL to do that.

I've been watching a three-cent stock lately - watching for quite a while, in fact.

I was about to pull the trigger, but I was a little too rigid in my thinking about an entry point.

Sure enough, the stock blasted off - 500% higher. Am I kicking myself? Well, maybe a little.

But I'm not being too hard on myself, because I know that the stock is actually in a great position to do it all over again before long.

Let me share the ticker and the high-profit-potential setup with you now...

Moving Toward Another Triple-Digit Rally

Like the name suggests, Cyberlux Inc. (OTC: CYBL) is all about high-tech lighting. Serious lighting, as in, they make powerful, portable lighting systems for battlefield operators in places we're probably not supposed to know about, military bases and installations, for a client list that includes the Air Force, various National Guard units, Special Operations Command (SOCOM), and the Defense Logistics Agency. Its systems are used in emergency and disaster recovery scenarios, too. Cyberlux has been a defense contractor for something like 10 years now.

That's all fascinating, but as is so often the case with penny stocks, we're less interested in what the company does than in what its stock does. We're not looking to bet the farm on this one or add it to the kids' college fund - we're looking for big, fast money.

As I mentioned in my "one that got away" sob story, this stock went ballistic toward the end of September, but the shares bumped up against a ceiling of sorts at $0.06. 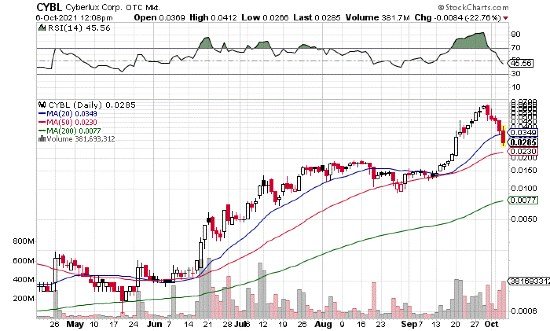 But in the last few sessions, volume is starting to pick up again, which is a bullish sign that the stock is entering another, possibly very powerful, upward trend. Its relative strength index (RSI) reading of 45.5 is bordering on oversold.

Nab this one at market and set a 10% trailing stop when the stock gets to $0.05 to protect your principal and your profits.

There's another small OTC stock I want you to know about - it could have even bigger profit potential. It's a $2 EV company that's already been on a 1,140% plus run over the past year. But like I said earlier about small stocks, it's possible to get second chances. This company is looking to list on a major U.S. exchange - something that could happen any day now. If that listing happens, the potential is there for another surge past 1,140% over the next 12 months. You can get details on that here...

Hi Chris, I've just been doing options but I'm in on 3 of your recommendations right now. I sold the fake meat one after it dropped too much, but am up nicely the Lithium play. Thanks buddy (in most chats I'm "Krull The Warrior King")

What was the lithium one ?

where can I buy shares of CYBL online? Tried on Webull but couldn't.