Look no further than our Dole stock forecast.

Dole Plc. (NYSE: DOLE) has a product line of over 300 items from global and local sources in over 30 countries. One in particular made headlines in the last few months, and not because it's flying off the shelves. 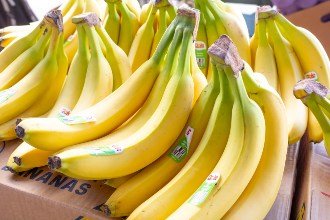 Anyone who has been to a grocery store knows Dole as the company that distributes fresh fruits and vegetables internationally. It's not a new company, just new to the market after a merger with Total Produce.

But Dole is facing a pandemic of a different kind. It affects banana crops. Tropical Race 4 (TR4), isn't a new problem, either; however, it's going international for the first time.

Investors have started buzzing about TR4 and DOLE, and analysts consider this among the top stocks to watch now.

If you're wondering where this stock will go in the next few years, check out this Dole stock price prediction...

Dole hit the public markets July 2021 after a merger with Total Produce. The Dole IPO saw 25 million shares up for sale, priced $16 each - analysts debate whether the stock is undervalued and where it's projected to grow.

The company raised $400 million in gross proceeds, boasting a market cap over $1.38 billion.

Dole is organized in three departments: Fresh Fruit, Fresh Vegetables, and Diversified Fresh Produce. Primarily operating in North America and Europe, the two markets have a combined worth of $335 billion and are expected to grow 2.7% annually from 2020 to 2025.

The organic food business in general can expect to profit on the interest in organic foods with increased focus on health and nutrition. It anticipates higher growth in categories like berries, avocados, organic produce, etc.

In fact, Dole's website is dedicated to healthy eating and nutrition advice targeting everyone from kids to stay-at-home parents to the on-the-go worker with little time for meal prep.

Its free cash flow margin is under control because it controls every step in the fresh fruit and vegetable industry. It commands its own growth, storage, and distribution.

While Dole has global competitors, $9 billion revenue as a newly combined business makes it the undisputed leader among rivals.

Since its IPO, Dole has caught the attention of the Reddit groups, the kind of groups that sent stocks like AMC Entertainment Holdings Inc. (NYSE: AMC) and GameStop Corp. (NYSE: GME) "to the moon."

Why Dole Stock Could Soar

Reddit traders have taken notice of DOLE. Mentions of the Dole stock on the r/WallStreetBets subreddit have soared up 4,600% seemingly overnight, and not for the usual reasons.

Since going public, the stock has traded in the $14 to $16 range. For many investors, that looks cheap.

No, it's not a short squeeze play, with less than 2% of its float being sold short. It doesn't stand to deliver with the usual meme trader investing style. People see this stock rising for other reasons...

There are many theories about what will cause the stock to rise, one being a result of what's known as Panama Disease, or TR4.

The fungus has been rampaging through banana farms for the past 30 years. You haven't heard about it because it's been contained. However, the epidemic has evolved to resist pesticides, and it suddenly accelerated.

It started spreading from Asia to Australia, the Middle East, Africa, and more recently Latin America, where most of the bananas in supermarkets come from.

To date, more than 20 countries face shortages of the world's favorite fruit, and bananas alone account for 27% of Dole's total revenue.

Momentum traders on Reddit decided the fungus is going to devastate South American banana crops this year, boosting prices of fruit and boosting margins for Dole.

In this case, a supply shortage will benefit the produce giant.

It's a pretty solid theory. Still, these rumors don't necessarily have to be true for investors to be right about the stock.

Regardless of a potential banana pandemic, analysts feel strongly about the fact that Dole is an undervalued stock.

According to the latest report from S&P Global Market Intelligence, Dole rang in nearly $148 million in positive free cash flow over the last year, more than twice its reported $60 million net profit.

Some analysts forecast a near 10% annualized earnings growth rate for the company over the next five years.

Samuelson points to the global produce leader's firm grip on the market and revenue over 2x the nearest competitor. It's prime to sustain gradual growth, and with shares currently discounted 17%.

Other analysts say the company's shares are worth as much as $35.

In any case, share prices will trend north, and Dole should be a worthy investment to add to your portfolio.

Of course, tomorrow's a mystery as they say. Anything could happen with Dole in response to the spread of a fungus. It's a great asymmetric play on the produce industry right now.

If you're looking for a stock more likely to give you big profits quickly, check out this recommendation from Money Morning's Shah Gilani...