If you've been with me for a while, you'll know that I think "alternative energy" isn't alternative at all. It's just a question of time and capital before it's the biggest game in town.

One-hundred and twenty years ago, market-watchers might've said these wild new automobiles were an "alternative" transportation to horses, and while horses didn't go away overnight, we all know how that trend played out.

After some "irrational exuberance" during the first quarter of 2021 that saw sector ETFs like the SPDR S&P Kensho Clean Power ETF spike and decline from ridiculous highs, the clean-energy sector just kind of... hummed along, for lack of a better word, with not much in the way of action one way or another.

That's beginning to change again - for reasons I'll get into in a second. My screens have an awful lot of green on display.

Volume is starting to pick up, too, particularly in one cheap over-the-counter energy stock. It's benefiting from the same forces that are driving its big-exchange brethren, but not many people are looking at it.

Double-digit upside potential? With the added, oh-so-nice feeling that comes from being in on a great secret? I'll take it...

Move on This at Market Open Today

Crack open the paper - or turn on the news - and you'll see a ton of worry about the economic recovery that's been going all-out since the end of 2020.

You've got the aforementioned global supply chain chaos, the delta variant, the labor shortage. There's inflation. I mean, it's still warm outside, and pundits are already talking about Christmas being ruined, for cryin' out loud.

The thing is, these conditions are bullish for energy stocks of all kinds. Growth is on the menu. Businesses - ports, truckers, shipping, all of it - will have to hustle to keep the lights on, and that's a good thing for stocks, commodities, industrials, energy stocks, and more. There's no direct correlation between the price of oil and clean energy stocks, of course, but market forces usually mean rising commodities costs force bargain-hunters into clean energy.

Sheffield, United Kingdom-based ITM Power Plc. (OTC: ITMPF) is no exception. It's a fascinating operation, dealing mainly in the hydrogen fuel cell segment. Mainly, it makes polymer electrolyte membrane electrolyzers - chewing up water and spitting out hydrogen and oxygen. The hydrogen is used for fuel, sure, but it's also stored and sold to help other industries "de-carbonize" and achieve that all-important "net zero" carbon-neutral state. ITM figures prominently in the U.K.'s ambitious plan to de-carbonize the British economy by 2050.

Now, hydrogen has been uppermost on a lot of analysts' minds for the past week or so, all because of ITM's bigger, brawnier brother, Plug Power Inc. (NASDAQ: PLUG), another hydrogen superstar. The market is thinking about the massive profit potential in de-carbonization right now. Government contracts are one thing, but there's even more private-sector potential here. Big aerospace firms like Boeing Co. (NYSE: BA) and Airbus SE (OTC: EADSY) are looking to clean up aviation - a huge, even notorious greenhouse gas emission source - and they're looking to hydrogen to help make it happen. They'll have to partner with companies like Plug Power and friends to get that big job done, and those public-private and private partnerships will be worth tens of billions ultimately.

Unlike PLUG shares, though, ITM is downright cheap right now. You can pick up shares for well under $7 right now, and the technical setup on this suggests big profits ahead. 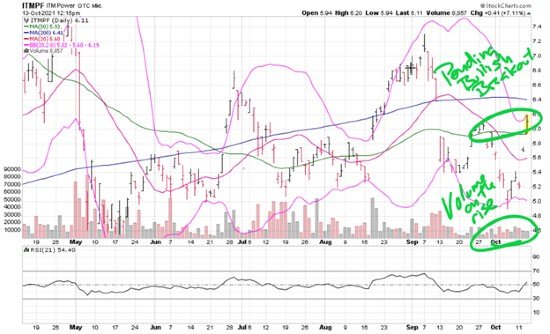 This stock is ticking all the boxes...

Buy and hold ITM Power for the long term, up to a limit of $6.25. Add a 7% trailing stop to protect that principal and your profits.

Clean energy, artificial intelligence, electric vehicles (EVs), self-driving vehicles - these are the investing trends of the future, and the time to move for maximum profit potential is... right now.

Take electric vehicles, for instance - a market segment that's red-hot and, the way I see it, getting hotter. Shares of the biggest EV player will set you back more than $815 right now, but I know of a small company trading for right around $2 today. You read that right: an EV stock trading for two bucks. In fact, this stock has already been on an 1,140%-plus tear over the past year, only now it's looking to list on a major American exchange. If that goes through, this $2 company could potentially blast off - not $5 or $10 or even $15, but the potential is there for $20 a share over the next year. Take a look...

Chris, I just read on Bloomberg that Linde is going to purchase ITM and thus control the PEM Hydrolyzer market globally.