I've said this before, but it's well worth repeating: One of the very best things about trading small, over-the-counter stocks is... second chances abound.

I can't imagine getting a second crack at monster profits in a mega-cap like Amazon or Microsoft, but when shares trade for pennies or a couple bucks, you don't have to sweat missing the boat.

Why? Well, the ebb and flow of volume in these stocks, small as they are, is actually far more extreme than you'd see on the NASDAQ or New York Stock Exchange.

So chances are good that ship will come in again.

And the chances get even better when you run scanners that constantly look for the best of those kinds of stocks.

I've been watching a tiny, $0.20 stock make some wild, high-profit moves over the past few weeks, and I'm telling everyone about it right now, because my screens show me it's about to put in a repeat performance, and I want everyone in.

I Spotted This Two Months Back... and Waited

Business Warrior Corp. (OTC: BZWR) is a Cheyenne, Wyo.--based marketing software company that lives firmly on the small end of the market cap spectrum at $50 million. The company pulled in $3 million in revenue in the third quarter. But as is often the case here, we're less interested in the company's business and fundamentals than in the behavior of the stock - those technicals I love so much.

Now, over the summer, BZWR stock flashed on my screen. I mentioned it to my Night Trader subscribers on a livestream, and conditions looked pretty good, but I wanted to see if the stock could deliver the goods before I went out with the recommendation. Despite this not being an "official" recommendation, some of my more intrepid subscribers took a flyer on the stock anyway, and not long afterward, I got a few anecdotal reports of 300% rocket rides.

But this won't be "the one that got away" - with these stocks, it's never long before you're teed up again.

The market is giving us another crack at this remarkable trade.

BZWR has seen the "volume vacuum" - that ebb and flow I mentioned a minute ago - and prices dropped back down to $0.16.

But over the last few days, I got what I've been waiting for. 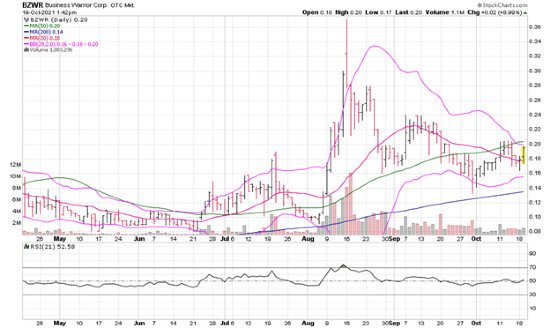 Share volume has started to bump up higher, and now the stock is poised to blow past its 50-day moving average (green line). Of course, this is a bullish trend.

That's not the only bullish force at play here.

The Bollinger bands (pink lines) are indicating that a volatility event is almost inevitable.

The trigger for this event? The $0.20 level that it's currently resting at; its finger is right on the button.

My friend Shah Gilani has a lot more on these small, powerful stocks you almost never hear about. Right now they're turning in some of the strongest performances on the market, with exceptional, top performers realizing peaks of 2,953%... 4,801%... 12,754%... even 22,207% in less than a year. Ninety-nine percent of investors are missing out on these, but you can learn how to get a crack at them right here.