The higher the price of Bitcoin goes, the more valuable a Bitcoin mining company can become. And Bitcoin blew past $60,000 again in the last few days - it's pushing all-time highs now.

That's only part of what fuels our latest Stronghold Digital Mining stock forecast. This company is not your average crypto miner... 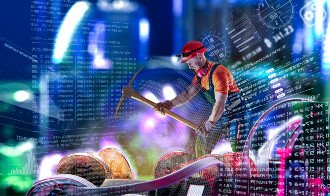 Stronghold aims to be the first North American Bitcoin mining company to go public via IPO. It's putting up nearly 6 million shares priced between $16 and $18.

At the high end of that range, Stronghold stock will bring in over $105 million of revenue for the company. The money will fund 900% expansion in mining capacity over the next year.

It now trades on the Nasdaq under the ticker SDIG. But thanks to Robinhood, retail investors have a chance at getting shares even before that.

This was one of the more recent stocks to be available through Robinhood IPO Access. Through that program, when you apply for shares, you can get chosen randomly to join big investment banks in getting IPO stock. If it's a popular IPO, chances are it will get a nice pop when it starts trading.

Since Bitcoin is making headlines these days, that's not out of the question. But even more than that, the long-term Bitcoin price prediction could push this stock even further.

Here's why this could be one of the best stocks to own in the Bitcoin rush.

What Is Stronghold Digital Mining?

Every crypto miner aims to be more sustainable than the next. The idea is to mine more coins using fewer resources.

Stronghold Mining goes the extra mile and does something unique in this regard. The Pennsylvania Bitcoin miner generates its own electricity by burning waste coal. It also sells that electricity to the regional utility company.

See, Pennsylvania is known for harboring heaps of waste coal from back when the state saw a coal mining rush. To this day, the piles of coal leak chemicals into the water. Pennsylvania's answer was to incentivize clearing these piles by having utilities pay energy companies that do so.

That's where Stronghold came in. It would use the leftover coal as fuel for digital mining. According to the Stronghold Mining prospectus, the company wants to use its "21st century crypto mining techniques to remediate the impacts of 19th and 20th century coal mining."

Now, if you're an investor excited about the larger environmental impact, that's a catch-22. The fact that this company is clearing coal heaps helps Pennsylvania, but burning those coal heaps does still produce carbon emissions.

The business model of burning someone else's coal to power your Bitcoin mining system, however, is a moneymaker.

Unfortunately, Stronghold Digital is not yet profitable. For the first six months of 2021, it reported a net loss of $3.5 million.

All of that plus an IPO is helping it grow the operation, which will be profitable as long as Bitcoin succeeds. Stronghold currently operates 3,000 crypto miners but plans on adding 55,800 machines by the end of 2022.

Of course, a downside of relying on Bitcoin is the risk of Bitcoin crashing. But if you've been watching the Bitcoin price lately, the future looks bright.

According to the company, the plans for expanding its mining capacity could increase mining power more than 4,000%.

If Bitcoin continues to rise and Stronghold is able to expand the way it wants, that will be a hefty profit for retail investors.

But everyone knows we don't live in a perfect world. The final question, then, is whether it's worth the risk.

If you can get Stronghold Digital Mining stock at the low end of its range, do it.

While cryptocurrency is still speculative, this is one of the more promising business models in the crypto space, positioned for high margins and speedy growth.

In fact, Money Morning's Dave Zeiler says Stronghold stock could double or triple in the next 18 months if Bitcoin stays above $50,000.

While Bitcoin could go through another bear phase, it's important to note that it's currently rising, which is the perfect time to snap up shares of a miner.