In other words, if you think of this as "just another restaurant IPO," you will be sorely disappointed in five years.

The legendary fast-casual restaurant, known for hot dogs, made itself a household name in Chicago over the last 60 years. Now, that name can be found on the Nasdaq after the Portillo's stock ticker "PLTO" goes live. 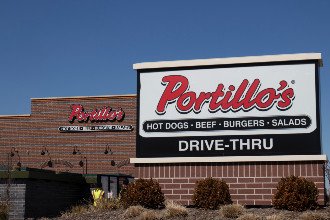 The company expects to sell just over 20 million shares in its initial public offering, at $18.50 per share. At that price, Portillo's IPO will raise around $375 million to help pay off its $479 million debt.

Since the restaurant industry is so competitive, new restaurant stocks are often met with skepticism. Eateries can disappear as fast as they came, or a dietary trend can last a few years, then fizzle out in an instant.

But Portillo's is different for a few reasons. The biggest is that it's thrived for so long while keeping it simple. People love the hot dogs and milkshakes.

The fact that it hasn't expanded its franchise in so long might seem like a concern at first. But a grassroots following like Portillo's can sometimes take longer to travel. The silver lining is that it sticks longer.

And this company is crossing borders, albeit slowly. It's seen as strictly regional to the Midwest, but you can find branches in Florida, Arizona, and California.

It's only a matter of time before these are everywhere. Here's more on why you should look into buying the stock sooner or later.

Portillo's was founded by Dick Portillo as a hot dog stand called "The Dog House" in 1963.

The company has always specialized in "Chicago-style" foods - hot dogs and sausages still take the spotlight. Today, you can order burgers, subs, pasta, and milkshakes as well.

The company has over 60 locations scattered across the country, most of them concentrated in Illinois, Minnesota, Michigan, and Indiana.

Portillo's started adding full restaurants in the '70s and '80s. Its first drive-thru appeared in 1983 under a different name, until the Portillo's we know today emerged in 1994 Chicago.

Dick Portillo sold his restaurant to Berkshire Partners in 2014. And that's where things get interesting.

Before, you would have wondered how a mom-and-pop hot dog stand was going to scale. But under Berkshire's management, the company plans to open five to seven restaurants per year.

That's great for the bottom line...

Portillo's boasts that all its restaurants are profitable. And it's growing fast under new management, which you like to see.

Earnings for 2020 were still profitable, though, despite losses early that year. It had more than doubled from $5.6 million to $12.3 million, on revenue of $455 million.

Despite having fewer chains than, say McDonald's Corp. (NYSE: MCD) or Chipotle, those chains are all highly productive on their own. QSR Magazine reported this company was 45th in the nation for sales per unit.

That's a great sign that people love the product.

Over the next 25 years, Berkshire hopes to take Portillo's from 60 to 600 locations. If it can keep its crowd-pleasing quality at scale, the company will quickly up its profits.

While the restaurant goes for an old-school diner feel, its model is hard to put in a box. The chains consist of a mix of eat-in, drive-in, drive-thru, and walk-up locations. And it appears to be adapting to the new restaurant landscape quickly.

This past year, it invested in a platform called Cartwheel, which helps with mobile orders and deliveries. And this will play a more important role in the restaurant industry for years to come. COVID-19 forced restaurants to adopt touchless operational models for a while, and many have completely tilted in the touchless direction now for the cost-cutting benefits.

For now, with the rate Portillo's is growing - and the rate of love it receives - this is one of the more exciting restaurants to look at.

Is Portillo's Stock a Buy?

Fast food might be a struggling market at the moment, with labor shortages and supply chain problems. But the demand will always be there.

And demand for more quality fast food will always be on the rise. Just look at how stocks like Shake Shack Inc. (NYSE: SHAK) and Chipotle have performed in the last five years. They have gained 128% and 345% respectively. Portillo's belongs in that camp.

All things considered in the long term, this company has it in the bag. It has the history, it's profitable, it's planted seeds across several states, and it continues to impress.

Now that Portillo's operates under a major private equity firm with a long-term plan, this restaurant will be near unstoppable.

For what it's worth, the hot dogs are great, the chili-cheese dogs are better, and this writer can't stop talking about their milkshakes.

If you don't plan on investing in Portillo's stock right away, at least go try a Chocolate Cake Shake. Be warned: This is not health advice.

If you're looking for even faster potential return on a stock going public, check this out...

i've eaten at Portellos a number of times and really like their beef sandwich, when you complete their survey you get a free french fry and sign up for their app and get free piece of chocolate cake on your birthday. The Portellos in Tempe, Az is always busy and has a great atmosphere. I am a fan for sure and now an investor. It will keep growing!!

Az Illinois Ron,this writer is not informed well or has eaten at Portillos. Its not hot dogs or Chocolate cake but a Chicago ethnic Chicago Italian Beef or Combo sandwich that the rest of the world has not been introduced to much like Mcdonalds 15 cent burger oncepeople taste the product nothing but growth writer should eat the product