The Allbirds stock ticker, BIRD, will soon appear on the New York Stock Exchange. But retail investors have a rare chance to invest in the Allbirds IPO as of Oct. 25 (Monday).

Robinhood Markets Inc. (NASDAQ: HOOD) just added Allbirds to its IPO Access platform. Starting in 2021, the stock broker app has taken select stocks and given retail traders an opportunity to apply for IPO shares. They're chosen at random, and if chosen, they have a chance at some big early gains that IPO stocks sometimes make. 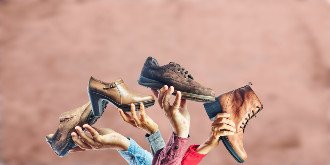 That puts them right in the arena with the big hedge funds and other whales that once had an advantage over the "Average Joe." But in today's market, you don't get as much of a head-start just for starting with more cash.

Now investors will have a chance to get Allbirds stock ahead of its IPO.

Allbirds filed with the U.S. Securities and Exchange Commission on June 29, 2021. The filing valued the company at $2 billion. The company aims to trade at a range between $12 and $14.

While buying any stock before its IPO offers some chance at profits, there will always be an element of risk. Some stocks plummet sharply after going public.

Unfortunately, while Allbirds is a promising shoe brand, it might be one of them. Here's why...

San Francisco-based Allbirds was named affectionately by its New Zealand founders, a reference to the fact that New Zealand has no native land mammals.

The company leans full-tilt into "environment-friendly" design. When it comes to designing shoes, this means limiting the amount of carbon output required to make the shoes. To do this, it uses trees, sheep's wool, crab shells, and more to build its products.

For the last two years, Allbirds claims to have been "carbon neutral." It measures this with its in-house Carbon Footprint Calculator, which it invites other companies to use in order to advance the mission.

While that may sound like a tedious thing for big corporations to join in on, Allbirds has had surprising success making allies.

Adidas, for example, will work with Allbirds to release the lowest-carbon running shoe in the world. Until now, most of the Allbirds catalogue has been streetwear, and this will be the first attempt at a dedicated low-carbon performance shoe.

Now, it's not just big companies in on the movement. Individual celebrities like Barack Obama, Matthew McConaughey, and Leo DiCaprio have helped promote Allbirds. DiCaprio is even an investor in the company.

So, it looks and sounds like a unicorn. But does it have unicorn financials?

We shouldn't expect such a young company to be profitable - many unicorns are not. The company has grown fast, and that's what has drawn the attention of many big names early.

Still, many will hold out for more concrete reports on the company's performance. Pandemic hesitancy also comes into play when investing in fashion companies.

Again, we don't expect immediate profitability from such a young company. But $20 million is also a steep margin. It will take years to overcome, barring a miracle. And if you look at other mission-minded companies, it's clear you need more than a mission to get there.

Honest Co. Inc. (NASDAQ: HNST) is a great example. It's still down 50% since its IPO, and it probably won't recover anytime soon.

Another mission stock went public this year, however, that is profitable and thriving. Duolingo Inc. (NASDAQ: DUOL) is up 84% from its IPO price, from $102 to $188.

The difference is not that one happens to have a better mission than the other. Duolingo is profitable because it has a profitable business model.

That's what many of these mission-based companies seem to miss, which is why they end up more as "headline stocks" than worthwhile investments.

Here's the verdict on Allbirds.

Should You Buy Allbirds Stock?

Buying an IPO stock early via Robinhood has been one of the most exciting developments of 2021. And Robinhood has sure delivered some winners.

F45 was another example of a company with flashy equipment and branding. But it's hard to avoid the fact that fitness trends fizzle out. Likewise with fashion.

Of course, the thing about Allbirds that could be long-lasting is the sustainability trend. People - and the right people, at that - are increasingly interested in sustainability. And that's not going away. More than 80% of banks worldwide have some plan to invest more in ESG (environmental, social, and governance) companies in the future. That means companies like Allbirds may see cash infusions over the coming years.

Of course, Allbirds will have to outperform the competition. Right now, it stands out as an early mover. But the big question is whether this company can keep innovating and continue growing its consumer base.

A couple volatile factors could get in the way of this.

First, no one knows where the pandemic is headed. Allbirds wants to open hundreds of physical store locations, but it will have a hard time amid any future COVID-19 lockdowns.

Second, fashion can be unpredictable. That alone could make it hard to recommend Allbirds as a day-one buy. If it already had profits, we might say otherwise.

Because it's still proving itself, though, stay away from Allbirds stock.

Besides, there are new stocks out there with even better profit potential...